Lukiz Jen (née Smyth) is a Starfleet Officer assigned to the USS Odyssey as its chief operations officer. Lukiz is an exceptionally gifted officer and has an eidetic memory which is coupled with the fact he is a joined Trill with several lifetimes of experience. Lukiz is sadly one of many Trill hosts that received their symbiont during a life or death crisis. Lukiz has had to take a lot of time in adjusting to his joining, something he was not prepared for, but over time he has come to depend on the Jen symbiont for its years of wisdom and talent. Initially he was a young, naive member of McCallister’s crew, however over the years he has risen through the ranks to become quite the officer. 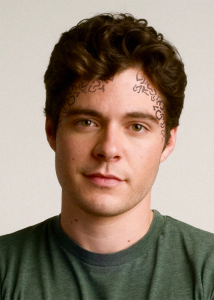 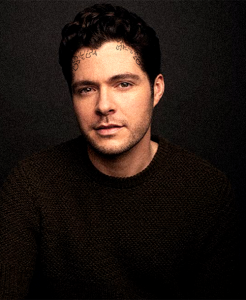 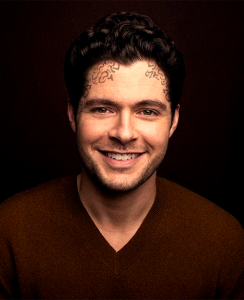 Average sized for a Trill man, Lukiz has a slim figure and does not command a strong presence however that does not mean that others do not follow him. His years of experience and wisdom as a joined Trill help him with this. His curly hair is kept neat and short on top while his dark green eyes give him some sort of mischievous glint. Lukiz always keeps himself looking presentable in every situation and rarely does he not shave. He prefers a clean shaved look, especially when on duty.

Lukiz was born on the Trill homeworld to investigative reporter Sezrah-Jain Smyth and noted archaeologist Doctor Juahn Smyth. Lukiz spent most of his childhood with his mother as his father was constantly travelling around the Federation on various expeditions. He had a very lonely childhood and kept to himself, focussing on his studies.

When he was in secondary school Lukiz was bullied for being a near genius at his school. A lot of the time it was based on his naïve response to social situations that caused him to be picked on. However when he finally graduated school he quickly applied to join Starfleet. His mother wasn’t too keen on him going off to join Starfleet. She felt that Starfleet had become too militarised after the Dominion War. Nevertheless she supported her son in his decision and helped him prepare to leave home.

Lukiz was quickly accepted into the Academy and was excelled in all of his classes. The Academy environment would help shape the young man in becoming the officer he would eventually become.

Many of his Academy lecturers believed that Lukiz would follow in his father’s footsteps into the science division, however he surprised them all when he picked to major in classes based within the engineering division. Lukiz was completely fascinated by starship operations.

Lukiz became good friends with his Academy roommate, a young man named Cline Lenjir. The two shared their bridge operations courses, where they met fellow cadet T’Rani. Lukiz quickly made a close friendship with Cline who was more socially adept and with Lenjir’s raucous teasing of the Vulcan, his amiable sense of humour an inevitable clash with her cold logic, the three became close, a well-balanced trio, and as a strong team they caught the attention of their instructor, Commander Cambil. The three of them graduated together, and at the same time as Cambil left the Academy; impressed with their success, and wishing to encourage their potential, Commander Cambil arranged for them to join her on her new posting.

At his graduation Lukiz was surprised at the appearance of his father in the crowd. A man he hadn’t seen in years. His father gave him a simple nod, smile with a wave before leaving to return to his life-long work. Lukiz stood by his mother as she sobbed into his arms, wondering if she would ever see her husband again.

This posting was the Luna-class USS Triton, a particularly impressive coup of an assignment for ensigns fresh from the Academy. Now out on assignment at last, Lukiz continued to develop his understanding of all the sciences and his social skills. While on the Triton he began his first romantic relationship with the captain’s yeoman: Tobias Court. The two took their relationship very seriously and moved in to shared quarters by mid-2386. On more than one occasion did Smyth impress Captain McCallister and other members of the senior staff with his work and extra assistance, especially with the science division. Commander Karyn Reyas, the ship’s chief science officer enjoyed almost becoming a second mentor to him (after Cambil of course) and she would often sit with him over lunch to discuss a range of scientific topics. 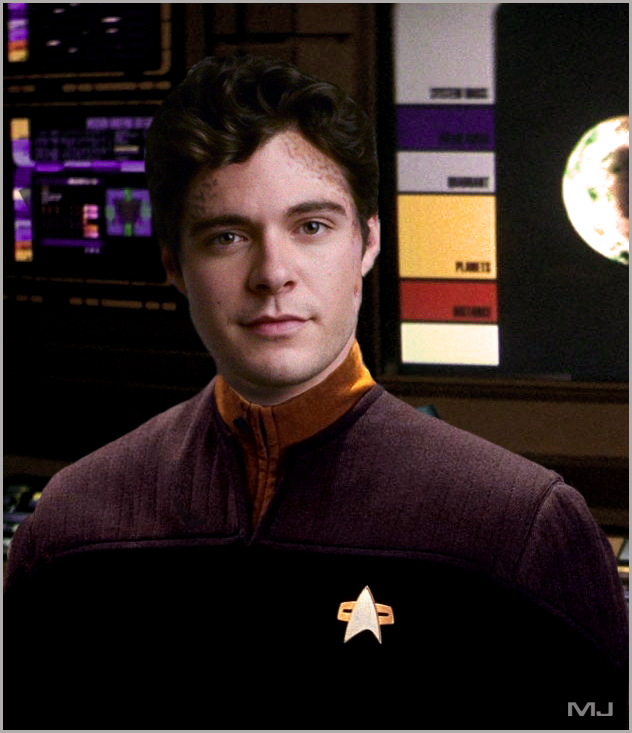 After a year on Triton, Lukiz started to feel more settled until the ship was assigned to a dangerous mission. This mission involved them rescuing the Federation colony on Kovar and Deep Space 19 from being attacked. However their efforts resulted in the Triton coming under fire instead and was inflected with heavy damage and mass causalities, including the ship’s chief counsellor Lieutenant Daubin Jen. The counsellor was a joined Trill and prior to the battle, Jen had started to reach out to the young Trill. As the only two Trills on the Triton, Jen would spend his time sharing his wisdom from his joining and was encouraging Lukiz to apply to become a host to the Trill Symbiosis Commission. Unfortunately, Daubin (the host) did not survive the emergency surgery he received and Doctor Slyvexs (the ship’s assistant chief medical officer) was forced to remove the Jen symbiont before it died with Daubin. The Denobulan doctor tried to save the symbiont, but it could not survive without being placed in a host. Fortunately with Lukiz being on the ship, he would be able to save the symbiont, even though he had not trained for any of it. Without hesitation, he agreed to the procedure and laid down on the surgery bed. After he woke up, he soon found he was a different man.

While the Triton was taking to the Beta Antares Shipyards for major repairs, the entire crew were re-assigned elsewhere. Captain McCallister, offered Lukiz a position on the new USS Odyssey. He gracefully turned down the offer, feeling he needed time away to deal with his new life. McCallister agreed to Lukiz to take time off from his duties to return to Trill to work out what he needed to know now he was a joined Trill. Lukiz decided to end his relationship with Tobias, much to the latter’s upset, but explained that he needed to understand everything to be the person he now needed to be.

Returning home to Trill was the best choice for Lukiz. He finally identified himself as Lukiz Jen shortly after his first few assessments with the Trill Symbiosis Commission. It took him almost two years to go through a range of therapies, exercises, research and personal reflection to come to grips with his identity. Thankfully his mother allowed him to stay with her, she assisted him with his transition.

By mid-2388, he was offered a position as an operations officer on Starbase 51, in the Murasaki system near to Trill. He accepted and moved to the starbase to try and return to his old life within Starfleet. He found the multiple lives of experiences from the Jen symbiont extremely helpful in his work and soon impressed his superiors. He was promoted to lieutenant junior grade in 2390. He was head of a team within his department who were responsible for a number of systems. Eventually though, Lukiz became restless and found his work on Starbase 51 to be wearisome and repetitive. Feeling confident enough, he applied for a position to join Deep Space 19 as its assistant chief operations officer. Many believed he would not get the job, but the operations manager of the starbase liked his application and offered him the spot. Lukiz moved at the start of 2391 to DS-19. 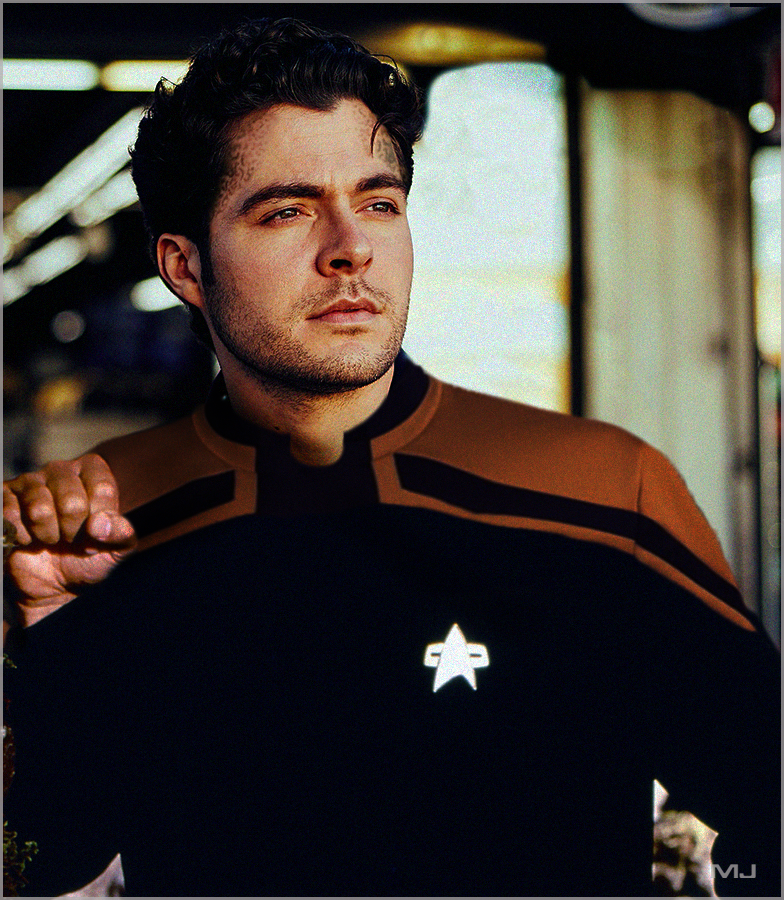 Lukiz’s time on the Unity-class station would be short lived, three months in fact, as his old shipmates were docked at the base when he arrived. He enjoyed seeing everyone on the Odyssey, even Tobias who had moved on from their relationship. The two agreed to be just friends, for now.

One evening, before the end of the year, Lukiz was quietly working on a report in the station’s replimat when he was approached by Captain McCallister. His former commanding officer told him that a position on the ship was about to open that he would want Lukiz to seriously consider. McCallister gave him until the next day to get him his answer. He said yes and placed his transfer request into Captain Templeton (DS-19’s commanding officer) the next morning.

Joining Odyssey as its chief operations officer with the promotion to full lieutenant was like a homecoming for the joined Trill. So many of his former shipmates from Triton had remained on the ship (a few had moved on). Lukiz quickly established himself as a fine addition to the senior staff, working extremely well with his two former classmates who were both in senior positions themselves. By 2399, Lukiz was promoted to the rank of lieutenant commander after proving himself to be an excellent command level officer. On many occasions he would take command of the gamma or delta shifts. 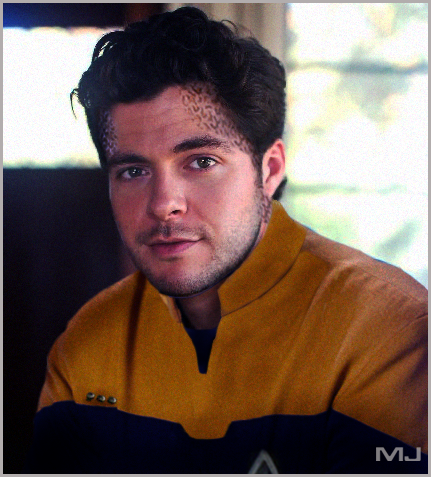 At the end of 2399, the crew was kidnapped onto an alien vessel. The ship had been exploring in the Delta Quadrant when they encountered what appeared to be an alien ark, drifting in space. After exploring the vessel, the crew discovered that its crew’s children were placed into stasis in an attempt to save their civilisation. When the ship’s AI came to life, it took control of the powerful vessel and kidnapped almost every adult on the Odyssey in a bold attempt to have them care for the children. Feeling somewhat responsible in helping the AI access more control, due to him and Commander Hunsen attempting to analysing its systems further to understand them, Lukiz initially blamed him for their predicament. Over a period of two months, Lukiz was responsible in being a mentor by supporting a group of young adults. Just like so many of his colleagues, Lukiz soon realised that if he hadn’t been placed in that situation then he may have soon discovered the subterfuge being carried out by the ship’s AI system. After returning to the Odyssey, he was assessed to determine the impact on her imprisonment. Like everyone else, he would undergo a lot of therapy to come to terms what had happened.