T’Rani is a Starfleet officer and serves as the Chief Flight Control Officer of the USS Odyssey. Originally she had not planned to join Starfleet, but when she saw the horrors of aftermath of the Dominion War, she had decided to join to make a difference. A former student of Commander Cambil, T’Rani has proven herself over the years as an excellent officer who excels in all areas of her duty. Her typical Vulcan approach to most social interaction is appreciated by many on the senior staff as refreshen. Her piloting skills are second to none, as a result Captain McCallister has relied on her natural instincts in getting the ship out of trouble on more than one occasion. 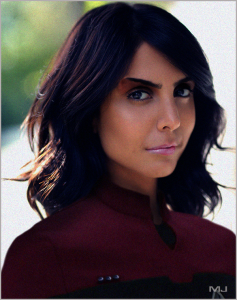 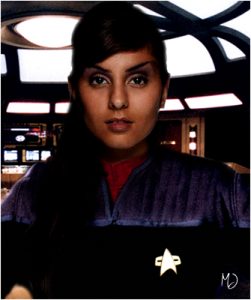 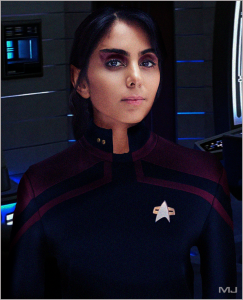 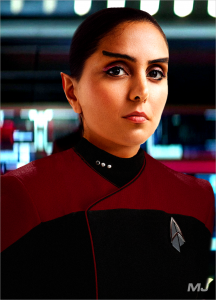 T’Rani rarely follows Vulcan customs and is known to have her hairstyle different all of the time. This is a personal choice of her own and she believes it shows her own individuality. Always presentable on duty, T’Rani wear a light level of make-up, her deep purple eye shadow is the one constant she has kept over the years. With a slim build, T’Rani is known to maintain her figure through a consistent fitness regime she has maintained since being in the academy.

T’Rani is quite the matter of fact person. Her logic is always on point and rarely displays her emotions, which is typical of her Vulcan heritage. T’Rani is though loyal to those she has known for a long time (this includes Lukiz Jen, Cline Lenjir and Cambil Bexa). Though regimental in her ways (e.g. always meditating, eating vegetarian dishes, playing kal-toh) she has been known to deviate from her choices when encouraged by her close peers.

A talented pilot, T’Rani has shown her natural gifts when flying any ship she has sat at the helm for. Her quick reactions makes the ship she is flying a formidable one to keep up with.  Though sometimes she can come across as being too blunt with the truth, one thing that T’Rani is with her close friends, family and colleagues is authentic. Being the genuine person she is, she will share her thoughts on a matter when asked and will, in her mind, do so in a way she believes is respectful. For someone who enjoys learning, T’Rani is not afraid to ask questions and to go and research any topic she finds intriguing. Her intelligence and experiences makes her someone many of the juniors officers approach for her thoughts and wisdom on a range of matters.

Though she suppresses her emotions, they have caught her off guard in her adult life. T’Rani found it difficult to deal with the idea that she could not conceive her own child and this caused a somewhat rift between her and her former husband, S’Tefe. Later on the death of her husband caused her to find it difficult to deal with her emotions. She was able to get through this with help from her close friends and her mentor, Cambil Bexa.

Though not one for wanting to develop her career for the sake of career development, T’Rani has expressed an interest in eventually joining the command track once she believes she has achieved all that she wishes to achieve as a pilot.

T’Rani was born on Vulcan in 2351, both her parents and older siblings were all members of the Vulcan Science Academy. It was already determined that she would follow in their footsteps to attend the prestigious institute. When she was a child, she would chase ch’kariya’s out of her mother’s vegetable garden. She found spending time in her mother’s well-presented and maintained garden amiable, especially when she meditated.

When she was ten years old, she had the fortunate opportunity to attend a lecture at the Science Academy, given by Ambassador Spock. During the lecture, she asked several questions regarding his tenure under the command of Captain Kirk. She found the entire experience fascinating. Without her parents’ knowledge, she spent several weeks reading the historical archive in regard to Ambassador Spock’s earliest achievements while with Captain Kirk.

T’Rani, as it was naturally assumed, excelled well in all of her studies and was given a position at the Vulcan Science Academy. Most of her work was around research and she varied her fields of interest for some time. While at the academy, she had the opportunity to train as a pilot. Feeling that it was an opportunity that would be illogical to miss out on, she undertook the qualification and was noted as being quite a natural pilot.

While assisting one of her professors on an expedition to Betazed in 2376, shortly after the end of the Dominion War, T’Rani was astounded at the devastation the planet had sustained during its short occupation. Reflecting on this trip for some time, T’Rani eventually concluded that her work at the Academy was not enough. The famous phrase she had heard Ambassador Spock say at his lecture so many years ago resonated in her, the Vulcan idiom of the needs of the many outweigh the needs of the few. Her needs were insignificant compared to those lives that were lost to save her liberties. There were still millions who were desperate to be helped. After meditating on it, she eventually decided to resign from the Science Academy and applied to join Starfleet, much to her parents’ disdain.

T’Rani found her application was quickly accepted and she passed the entrance exams with ease. Knowing that her skills were best served in becoming a pilot, she focused her efforts on this as well as taking several courses in the sciences. Eventually, she graduated from Starfleet Academy and went on to serve on the USS Triton.

Fortunately for T’Rani, she developed a close rapport with one of her instructors, Commander Cambil. When Cambil was offered a position on the Luna-class ship USS Triton, she took T’Rani and two other formally graduated cadets with her. They ended up forming the ship’s bridge gamma shift crew. T’Rani was the ship’s new gamma shift flight control officer. It was a position she worked hard in and impressed her superiors, especially Captain McCallister.

At the end of 2386, when the ship was heavily damaged and the crew were being re-assigned, Cambil put in a request to keep T’Rani as the crew moved to take on their next big challenge.

Being under the tutelage of Triton’s former assistant chief flight control officer, Lieutenant Tremt Hunsen, T’Rani had developed her piloting skills further. As such, she was recognised for this and offered the position of assistant chief flight control officer on board the brand-new USS Odyssey. Before the ship was launched, she returned to Vulcan to undergo the pon farr with her mate, S’Tefe. The two were married, however, it was discovered that due to an unusual increase in the chemical imbalance of her pon farr, T’Rani was not able to conceive children. Not willing to attempt any medical procedures to correct the issue, T’Rani returned to her work immediately. S’Tefe, who was a former colleague of hers from the Vulcan Science Academy, joined her on the Odyssey to become a teacher for the children that would be on the ship.

In 2389, she was made acting chief flight control officer when Lieutenant Hunsen joined Captain McCallister on a year-long mission off the ship. When Hunsen returned to the ship with the captain, he was made chief engineer and McCallister, under the advisement of his first officer, made T’Rani chief flight control officer with the rank of lieutenant.

Several years later, both S’Tefe and her attempted to have children again when he underwent his pon farr. Once again they were both dissatisfied that they did not conceive a child. Instead, they decided to focus their efforts on their careers instead. S’Tefe had also taken on a duel role on the ship as a civilian specialist.

By 2397, T’Rani had remained on the Odyssey, achieving the rank of lieutenant commander in this year. Two years later and during the Archanis Campaign, T’Rani had to deal with the loss of her husband after he died during a Klingon attack against the ship. He died defending his classroom from boarding Klingons. The loss of S’Tefe was a major blow to her emotional control and T’Rani found it difficult to comprehend his loss. Seeking support from Commander Cambil, initially, T’Rani was able to deal with her emotional reaction to his loss and through professional help from one of the ship’s counsellors (Samris) she came to terms with S’Tefe’s loss. Though she suffered from sleepless nights, she asked Counsellor Samris to help her with Vulcan neuro-pressure. Being a Romulan, he was compatible but their daily interactions eventually led to sexual attraction between the two. After several months of engaging with each other in such acts, the two decided to take their relationship to the next level after Samris developed romantic feelings for her.

When a majority of the adults on Odyssey were captured by an alien ark while it was exploring the Delta Quadrant, T’Rani’s relationship with Samris became public knowledge after the alien hologram placed them together to raise its children. After almost three months of living with one another and raising the children, T’Rani had come accustomed to being a mother. This was sadly ripped from her, as it was for many others when the Odyssey rescued her and the others from the alien ark. It was discovered during this attempt that the alien children were in fact only advanced holograms. Though she mourned the loss of the children she cared for, T’Rani came to admit her emotions towards Samris had deepened. The two had decided to move in with one another.