Born aboard the USS Enterprise (NCC-1701-B) in 2293, Karyn became the youngest survivor of the devastating Borg attack on the El-Aurian people which left them scattered throughout the galaxy.

Having lost her husband and son, her mother Najra had boarded the SS Lakal in the hope of beginning a new life on Earth with her unborn child. Fate, however, was destined to intervene and the SS Lakal was struck by the Nexus energy ribbon and ultimately destroyed. Many, however, were saved by the arrival of the USS Enterprise-B and the sacrifice of one James T Kirk allowed many of the refugees to be beamed to safety – including Najra. Less than two days later, she had given birth to a healthy baby girl.

Earth became an adopted homeworld to many of the El-Aurian survivors, including Karyn and her mother. There she flourished under the watchful guidance of her mother, who encouraged her to take her own path whilst ensuring she did not forget her people or their history. All of the stories fuelled a desire to explore, to learn… complimented by an inherent curiosity. Though she shared some of her mother’s natural gift for the arts, from an early age she was drawn towards the sciences and archaeology.

With an apparently limitless energy and enthusiasm, the young El-Aurian devoted herself to learn all that she could – earning doctorates and the recognition of her peers as an expert in many subjects. She then surprised many of her peers when she announced that she intended to join Starfleet.

In 2364, Karyn was accepted into Starfleet Academy. During her four years as a cadet she specialised in the sciences and came to the attention of many of her lecturers. One of them, Captain Simon Leighton, went on to command the USS Orion (NCC-59804). He was so impressed by his then student that he used what influence he had to ensure Karyn was assigned to his ship when she graduated. 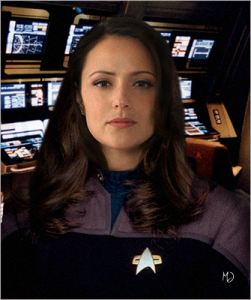 Karyn Reyas, shortly at the end of the Dominion War

True to the founding principles of Starfleet, the Niagara-class USS Orion was primarily a ship of exploration and research. With a crew which was comprised mostly of scientists, they were not prepared when war broke out in 2373. Ill equipped to be actively involved in battle, the Orion was called into duty to act as a support vessel and render aid within the Federation’s core territories. During this time, Karyn’s career advanced as she gained more senior positions within the ship’s science department due to several members being re-assigned elsewhere in the fleet. She reached the position of Chief Science Officer by mid-2374. Along with her new assignment, Karyn also received a promotion to the rank of Lieutenant junior grade.

Just one day before the Treaty of Bajor was signed, whilst preparing to return to Earth where the ship was scheduled to undergo a refit and overhaul, the Orionpicked up a distress call from a transport ship. They immediately altered course in order to render aid, however, the distress call was not all it appeared to be. It was a last-ditch effort by a Dominion ship to inflict some damage to the Federation. The ship barely survived and, having suffered heavy casualties, limped home to the nearest starbase.

The Orion was deemed to be beyond repair, and the crew given new assignments.

After a brief period of R&R, Karyn was ordered to Outpost 42, a research & development facility. Whilst there, Karyn once again established herself as an expert in her field and quickly earned a promotion to the rank of full lieutenant. After almost seven years, she requested an extended leave of absence to join an archaeology expedition organised by her mother. Albeit reluctantly, the request was granted.

In early 2384, Karyn returned to duty and was offered a position as guest lecturer at Starfleet Academy. Whilst there, she meet fellow lecturer James Preston McCallister in 2386. The two quickly became close friends and within a matter of weeks had moved in together. Though they were happy together, Karyn knew that he belonged on the bridge of a starship and encouraged him to return to what he was clearly born to do. She was delighted when he followed her advice but was unprepared when this led to a surprise marriage proposal and a request to join his senior staff.

After their wedding on Earth, Karyn joined James on the Luna class starship USS Triton and was made his chief science officer and third officer. Starfleet wasn’t too best pleased with James’ decision but after discussing it with Command, he was able to convince them that Karyn had a wealth of experience to offer as a command officer and the Triton was foremost a ship of science and exploration before a ship of defence.

Their time together on the Triton, only went on to cement their marriage. Their time on the Triton would be short lived though as by the end of 2386, the ship was heavily damaged. 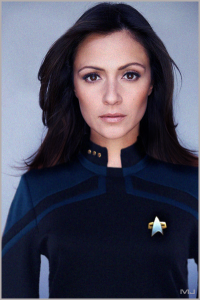 Starfleet agreed to James’ request to move a majority of the crew of the Triton to the USS Odyssey before its launch in 2387.

Karyn was one of them and again, she would take on the role of chief science officer and third officer. Karyn enjoyed all aspects of the brand new Odyssey­-class, especially as the ship’s science departments had a range of new experimental technologies to use. Later on in the year, Karyn fell pregnant with triplets. It was a happy occasion and she enjoyed becoming a mother.

Raising her three sons meant that Karyn took her maternity leave, for almost a year and left the science department to run by her deputy, the ship’s chief astrometric officer, Lieutenant Naef Oron. The Brikarian man kept Karyn in the loop and on her return to work the transition was extremely smooth. By the end of 2388, she was promoted to the rank of commander after she successfully completed the advanced bridge officer’s exam.

Sadly for Karyn and James, he was re-assigned temporarily to the USS Avenger. Karyn remained with the boys on the Odyssey. While he was not around, Karyn was assisted by many on the ship in raising the three babies, particularly Tobias Court, the captain’s yeoman would visit her every day and would take the three boys out in their hover pram to give Karyn sometime to herself.

Thankfully, James’ assignment only lasted a year and he returned to the Odyssey by the start of 2389.

In 2391, James’ first officer (Zachary Hawkins) was made a captain and given his own command. Hawkins’ departure left a gap in the command structure, as a result, James decided to promote internally. As a result of this, he made Karyn second officer. A position she rightly deserved. When Odyssey was involved in dealing with the Romulan Neutral Zone in 2395, Karyn’s job as chief science officer was instrumental when the ship was mapping out the former buffer. Four years later, Karyn was offered by Starfleet Command to return to the USS Triton as its new captain. Flattered by the proposition, she turned it down as she did not want to move her entire family and be away from James. She decided not to share this news with him as she knew how he’d react. Instead she remained on the ship, enjoying the life she had built.

Karyn Reyas is a Starfleet officer, currently assigned to the USS Odyssey as Second Officer and Chief Science Officer. She possesses a range of experiences as a command officer alongside her wealth of knowledge in the sciences. Married to Captain James Preston McCallister, she is the mother to three sons as well. Karyn is known for her motherly instinct and counsel to many members of the younger crew. Witty and caring, Karyn's ability to command the respect of the entire crew is impressive. A dedicated science officer to heart, it is rare not to find her on her off hours reading the latest scientific journals and undertaking her own research.