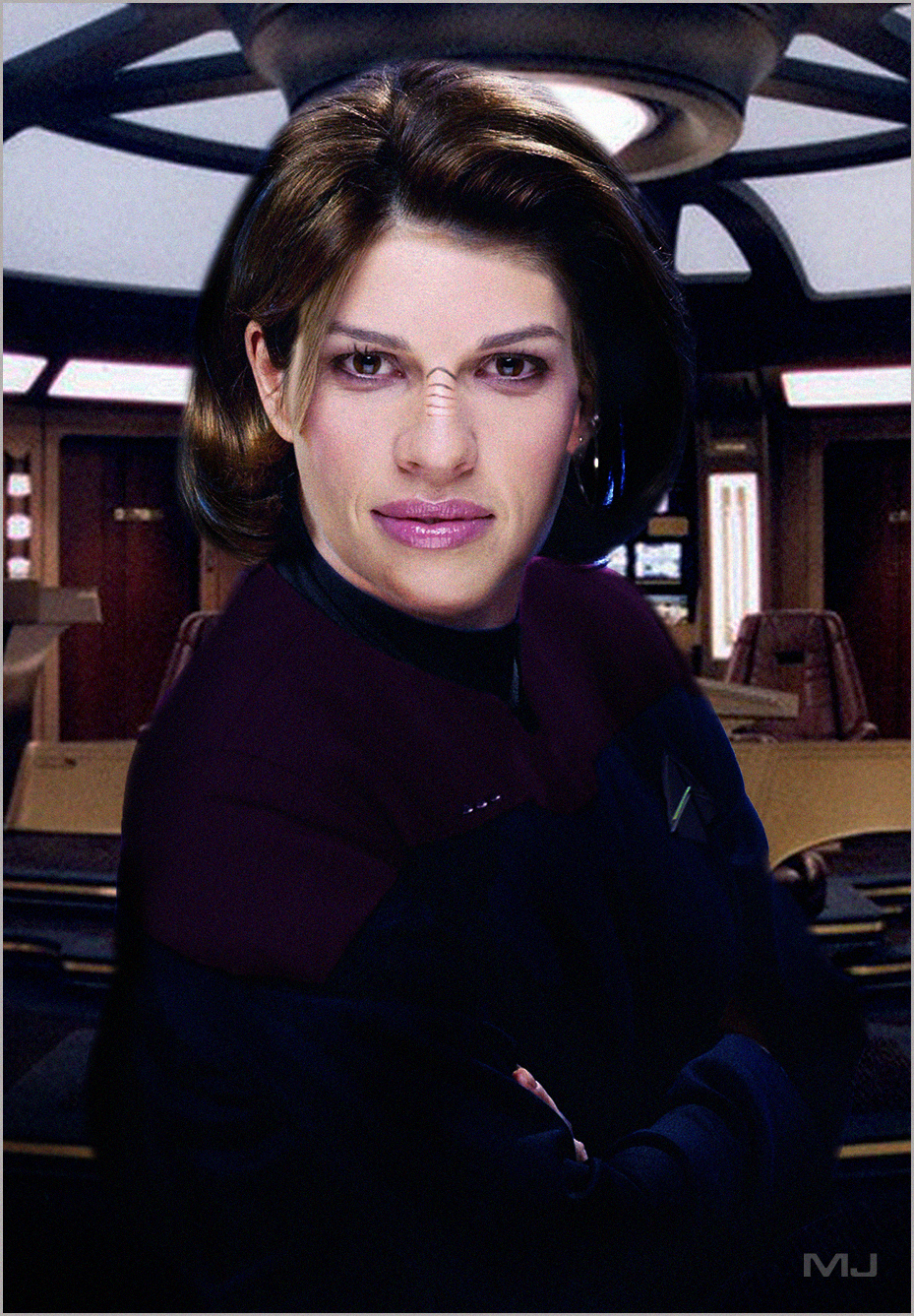 Cambil Bexa is a Starfleet Officer and is the current Executive Officer of the Federation starship USS Odyssey. She has been Captain McCallister's trusted right-handed woman since 2391. She has formerly served not only in Starfleet as a Security Chief and Starfleet Academy lecturer but as an officer in the Bajoran Militia. Always personable, Cambil takes it upon herself to know the names of every officer serving under her, and to understand their personalities. She prides herself in being a fair person to work for, and enjoys seeing growth in her staff. She has an excellent sense of humor, though maintains an aura of graceful professionalism while on duty, especially on the bridge itself.

Cambil Bexa was born during the Occupation of Bajor, though she and her family escaped most of the ravages of that era in history, when they were smuggled off planet in 2357. She became part of a small Bajoran Diaspora, consisting of a few hundred thousand Bajorans who had managed to flee their home system, and who had formed small colonies in out of the way places of the galaxy, including on Olbari II, which was within Federation space. Because of this, she has had a relatively fortunate life, compared to many Bajorans of her age.

A very spiritual child, she believed firmly in the divinity of the prophets and hoped that one day they would allow them to return to their homeworld. Though spiritual, she also had a very keen interest in the practical side of returning to Bajor, which mean that she was interest in self-defence, which she began learning from a young age.

After the end of the war, and after attaining an entry level degree in Interstellar Relations at the local university, she finally realized that dream and returned home to Bajor in early 2372. With a better education than most young Bajorans, she was able to enter the Bajoran Militia as a First Lieutenant and was assigned to personal security for members of the Bajoran Provisional Government. She was always praised for her attention to detail and her ability to provide security discretely, during her four-year stint in that role. Though she enjoyed protecting her fellow Bajorans, she grew unhappy with the assignment, as protecting politicians seldom allowed her to actually get into the field. She later giving a field promotion to Major in 2375 when several of her senior officers committed a ritual suicide after the Reckoning was stopped by Kai Winn. They believed they couldn’t follow and protect the Kai after it was discovered she stopped the battle between the Prophets and Pah-wraith on Deep Space Nine. While on Bajor she married Faren Naprem, a teacher from Dakara Province.

This predicament was solved in 2376, when Bajor entered the Federation. Her commission was transferred to Starfleet, and she made a lateral move from Major to Lieutenant, joining Starfleet security.

Cambil’s first Starfleet posting was as a Lieutenant to the USS Aeneas a Defiant class starship assigned to patrol the Gamma Quadrant side of the Bajoran wormhole, to ensure that the Dominion respected treaty stipulations and allowed the Bajoran colonies in that area to go unmolested. Aboard such a small ship, it was easy for her to become friends with many of her colleagues, and she distinguished herself on many occasions by her attention to detail and the professionalism with which she conducted herself. While aboard the Aeneas she completed Starfleet Academy extension courses to make up the difference between her two-year degree and the four-year degrees typically held by officers in Starfleet.

In 2378, Cambil was assigned as the Assistant Chief Security Officer aboard the USS Crazy Horse (NCC-50446), where she helped a Lieutenant Commander handle a staff of about 100 security officers, as the ship patrolled the core of the Federation. There, she learned the skills that were expected of a security officer within the Federation itself, and how to deal with civilians.

In a slight change of career paths, Cambil accepted a promotion to Lieutenant Commander and joined the crew of the USS Intrepid (NCC-74600) as Chief Security & Tactical Officer, responsible for both the internal and external safety of the ship. While she was less experienced with starship-based tactical systems, she overcame this shortcoming relatively quickly, and served as an integral part of the crew for two years.

In 2382, Cambil was offered a teaching position at Starfleet Academy, in recognition for her professionalism as a field officer. Normally professors had 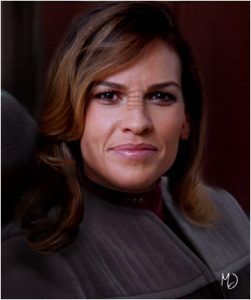 more experience than she did, but Starfleet was experiencing a recruitment boon and needed more professors to handle the increased student load. Her husband was able to move with her and took up a teaching position at a local secondary school. After one year on Earth, she gave birth to twin boys. She joined the faculty as a general instructor in Starship Operations, and taught classes in Small Unit Tactics, Security Operations, and Starship Operations to all levels of cadets, during a four-year tenure at the academy. She found teaching to be a rewarding experience, but also found that she preferred deeds to words, and would like to be back in operational service, with the blessing of her husband.

While there, she developed a close rapport with a trio of cadets (T’Rani, Lukiz Smyth, and Cline Lenjir), and arranged to have them assigned to her new posting, when she accepted a transfer to the Luna-class USS Triton (NCC-80106) in 2386.

Back aboard a starship, she found herself now as a Lieutenant Commander, and a seasoned veteran of the service. She was assigned to lead Gamma Shift, as Officer of the Watch, responsible for leading the bridge during that shift, and supervising the personnel assigned to it. 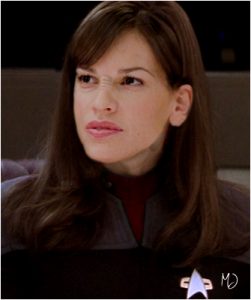 Lieutenant Commander Cambil on the bridge of the USS Triton

While on the Triton, the ship responded to a distress call from her homeworld of Olbari II. It was threatened by a massive snowstorm and Captain McCallister volunteered for Triton to help with the colony’s evacuation. Cambil was appointed liaison between the rescue efforts and the colony’s government. Once the ship arrived in the Olbari system it quickly responded to the emergency relief efforts that were under way. Cambil found this particular mission difficult, when the colony also suffered from a pandemic. Having to watch people she knew suffer from the virus, was particularly tolling on the Bajoran woman. She even protested to McCallister about his treatment of the colonists, or lack thereof. The two came to blows and he ended up relieving her of her duty and confining her to her quarters. As her husband and sons were there, it became more difficult to explain what had happened.

Eventually the crew found the cure and the quarantine was lift. She apologised to McCallister for her behaviour and he decided not to place the incident in her permanent record.

At the end of the year, McCallister asked Cambil to join him on a new ship, the Odyssey which he was being given after Triton was heavily damaged. Instead of being Gamma Officer of the Watch, he was asking her to be his Chief Security and Tactical Officer as well as Second Officer with a promotion to commander. Knowing that this new ship could accommodate her family, she agreed. 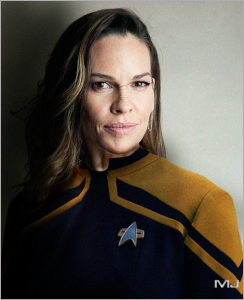 Commander Cambil as she joined the USS Odyssey

Being a brand-new prototype, Cambil (along with everyone else) knew that they had to prove to Starfleet that the new Odyssey was a successful design. Being in charge of the ship’s safety was a complete change to what she was used to in comparison to her time as the Intrepid as its chief security and tactical officer. The sheer size of the Odyssey made her job a challenge on a daily basis. Nevertheless she enjoyed it.

By their second year in on the Odyssey, Captain McCallister was assigned a secret mission by Starfleet. All that he told the senior staff was that he would be assuming command of the Avenger and would leave temporary command of the ship to the ship’s first officer, Commander Zack Hawkins. As a result of this, Cambil would fulfil the role of acting first officer while Hawkins commanded the ship.

McCallister’s absence took over a year until he returned in 2389. During her tenure as acting first officer, she had come to enjoy the responsibilities of

being in the command division again. It took almost another year or so for her to admit to it with Captain McCallister and informed him she would be considering a new posting. He asked her to remain with them for at least a year. She agreed as this would give her time to sort out what her family would do if she could not find a posting that would accommodate them and her together. In 2391 though, fortunate smiled on her (although she refers to it as a blessing from the Prophets). Commander Zack Hawkins had been promoted to captain and given command of a new ship. As a result, McCallister asked Cambil to become his first officer. She agreed instantly.

The two would become extremely close friends over this time, on many occasions both of their families would share mealtimes, social occasions and their sons would all become close friends. In 2399, she was approached to become a captain herself, but declined. Saying she was content staying on with McCallister on the Odyssey.