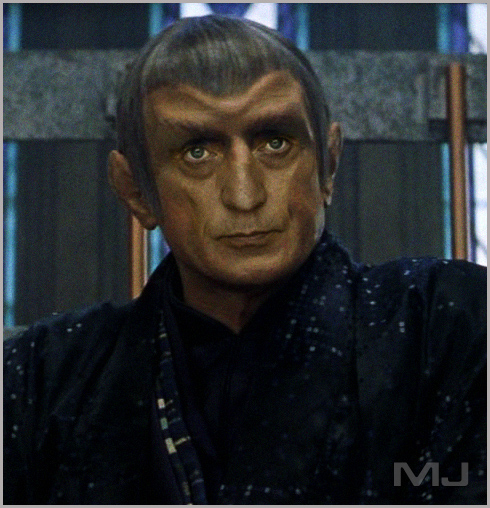 Senator Valer is one the most senior members of the Romulan Star Empire’s Continuing Committee and the Imperial Senate. A true patriot, his ancestry links his family to those that laid down the first set of settlements on Romulus. His family has always been involved in the Romulan judicial system or its legislature. With this heritage, it was clear that he would one day take on similar roles. Valer is known for his intelligence and perseverance in ensuring that needs of Romulans come first. He harbours strong resentment to those who abandoned the Romulan Star Empire after the Hobus incident. His end goal is to reunify all Romulans under one banner, the Star Empire’s. As a result of this ambition, he is known for his callous approach when dealing with state and sometimes personal matters.

Born into a family with a long tradition of being politicians and magistrates, Remik Eldun tr’Valer was the youngest of three boys. His family, one that was wealthy and highly significant, were keen to expand their realm of influence into the military. As a result, Remik observed as he two older brothers were forced to join the Star Navy as officers. On the other hand, Remik’s father had other intentions for him and insisted, quiety heavy handily, that he focus on Romulan law. Even in his early childhood, his parents tought him Romulan laws and how to interpret those. They also expected him to be one of the best at class and he did everything to please them. He used his rare time for hobbies to learn fencing and read classical Romulan literature, but he did not have time to make many friends. His father, who was a senator and who had a brother who was a judge, would take him to his constituency surgery where he would engage in fierce debate and discussion with those who he represented in Imperial Senate. Watching both his father and uncle in this role, influenced the young Romulan to follow in their footsteps in becoming a public servant later on in his life.

With his success at school he became ambitious and always better, until graduation as the best of his class. For his studies, he applied for the School of Laws at the Imperial University on Romulus, where he was accepted. By the time he started his degree, he was well-known for his ambition and strong presence in any room. As a result he was appointed as Presider of the Student Board. Pleasing his father with his progress, Remik was sought after shortly before he graduated by several top legal intercessor firms. His studies of law focused in criminal law and intergalactic law. After he graduated as the second best, he started an inaugural dissertation to become a Doctor of Laws, which took one year. Eventually, he took a place as a junior intercessor in one of the most prestigious firms in the Romulan capital.

After his doctorate he did his Serona, the Romulan compulsory military service, in the law division. There he was able to show his knowledge of the law and impressed his superiors. After eight years of service, he left the service and was seen as the favourite son, compared to his siblings. His older brothers had gone on to serve on a range of starships, but neither one had amounted to prestigious positions. Returning home to Romulans, he returned to his previous legal firm and worked his way through the ranks by becoming a senior partner. Almost a decade and a half later, he married his wife, Coraine, a fellow partner at the firm and the two started to have children of their own.

They eventually moved to the city state of Dinalla and setup their own firm there. His opponents in court soon learned to fear his abilities as a prosecutor and lost one trial after the other. Six years later, he applied for the position of a judge in Dinalla, which he got after a successful campaign supported by his family and their allies in the city. In Dinalla, Remik made a name for himself and his family, he was known for his strict interpretation of the laws and his strong sentences.

In 2359, he was approached by his uncle, who had become the figurehead of their family after Remik’s father had been diagnosed from Tuvan syndrome several years prior. His uncle was planning to retire from his public life completely, he wanted Remik to take over from him as one of the highest-ranking judges in the Romulan capital. Honoured with such a position, Remik agreed and was appointed to the supreme courts. There he remained for two decades. During his tenure he observed Romulan law being damaged and in some cases being ignored by many politicians of the Imperial Senate. When his own father passed away in 2375, during the height of the Dominion War, Remik and Coraine began discussing a new path for them and their family. Remik planned to succeed his father as a senator, but before he had the chance to do such a thing, his uncle was selected instead. On some level, Remik would later be grateful that he was not selected as his uncle would be killed during the Shinzon coup of 2379. As a result of this, when the Imperial Senate was reassembled, Remik was the last surviving and eldest member of his family as both of his brothers had died during the Dominion War. Coraine succeded her husband in his role as a supreme judge while he took up his father and uncle’s seat on the senate.

Over the next fifteen years, Remik continued to make a name for himself in the Imperial Senate. His highly conservative views made him someone that many in the public agreed with, especially as he was a strong advocate against any form of alliance being signed by the Star Empire with the Federation and Klingon Empire. He felt it was every Romulan’s duty to follow the laws and traditions set out by their ancestors and rebuild the Romulan society that Shinzon and his followers almost destroyed. In 2383, his rallies across the Empire become notorious and famous for encouraging the Romulan people to be true loyalists. Due to his popularity, he was elected to the Continuing Committee and eventually had the Praetor’s ear on many domestic and foreign issues.

Two years of being highly successful, Remik was forced to reconsider his position when Romulan scientists discovered that the Romulan homeworld would eventually be destroyed by the Hobus supernova. Devastated that his home would be lost forever, Remik was forced to reconsider his position on many aspects. Surprisingly he co-sponsored the bill into the senate that would approve of Federation assistance in the matter. Having his named signed onto the bill proved popular by many in the senate, with many following him. His critics called him a hypocrite after he had been so against the Empire developing its relationship with the Federation. At one of his rallies, he publicly admitted that for the Romulan people to survive they needed the Federation’s help. He vowed he would not see billions of his people die unnecessary and that he was strong enough to reflect when he was wrong and the people needed to come first before any political ego or pride that he had. Sitting on the Continuing Committee, he also knew that the Romulan Star Navy did not have the complete capability to defend their borders and move so many people. He was known though for saying that once their people were moved, he would reconsider his position on the Federation.

For his efforts in rallying public support in the mass evacuation, the praetor awarded Remik with the position of Chairman of the Senate Relocation Committee. It was Remik’s job to ensure a smooth transition between the government moving from Romulus to the new capital world of Rator III. Moving his entire family to Rator, including his wife and children, Remik found the role of dealing with the Governor of Rator and the other senators a challenge. He spent most of his time dealing with the military as well as civilian agencies in dealing with the process of preparing for the handover. Later on in 2385, news reached the Romulan Senate that the Federation would abandon their rescue plan and relief efforts. Many within the Empire turned to Remik for his thoughts and comments. He simply said he was not surprised and called for all Romulans to remain calm and that together they would get through the mess that the Federation left them in. However he publicly criticised the Federation and used his influence on other foreign dignitaries to support this.

Shocked and surprised at the reaction, Remik’s words for some was not good enough when Romulus was eventually lost. The Star Empire was divided both politically and socially. His years of advocating Romulan law, Romulan traditions and customs had come crashing down around him. Even his own son, a Romulan military officer, distanced himself from his father and family and joined what would become the Romulan Republic. The tragedy of the home world’s lost, coupled with his son’s betrayal, made Remik a very bitter man. Returning to his rallies and engaging in high profile debates in the Senate, made him once again a high-profile public figure. He pushed forward for an agenda that would keep the Star Empire’s border’s closed from the Federation while also having what was left of their military might push for stronger action to be taken against those that separated away from the Empire. Alongside this, he promoted for a return to traditional values within Romulan society. He has introduced many reforms into Romulan law, including firm and harsher sentences on those found to be supporters or members of the Romulan Free State and Romulan Republic. In 2397, he made a passionate speech on the floor of the new senate to introduce a new bill that would double the Star Empire’s spending on resources to expand the fleet of the Star Empire so that they could further improve the security of their borders. He got quite the following from the people, with many by 2398 voicing their opinions that he should become Proconsul. However this is a title and job he does not aspire to, instead he feels he has more influence within what remains of the Senate. Finally in 2399, his son who had joined the Romulan Republic was captured by the Star Empire. Remik watched as his wife, the mother to their rebellious son, oversaw the trial. Coraine sentenced her son to a lifetime sentence to the dangerous prison mines on T’Met. Remik supported her wife’s decision and wanted everyone to see that no-one, not even his own son, was above the law or could get away from the Romulan Star Empire. Before his son could even reach T’Met, it was discovered that he had committed suicide on the transport he was on. Remik and Coraine refused to attend his burial service.