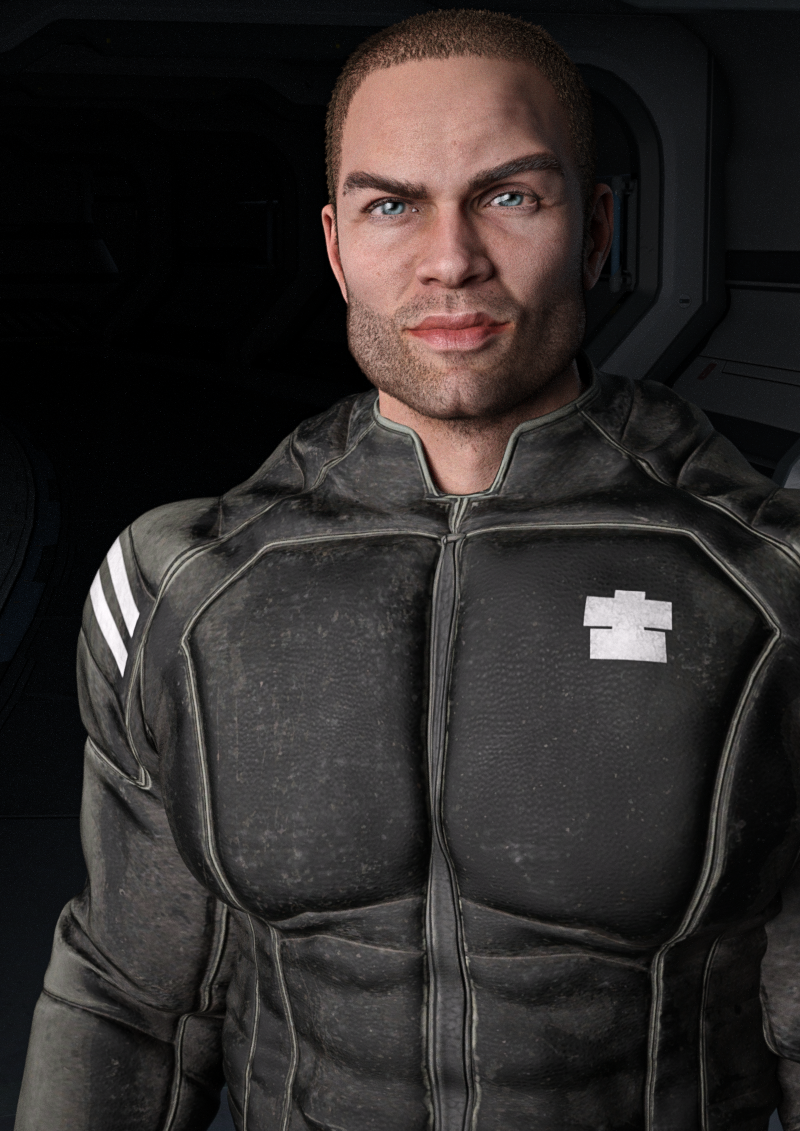 Raan’s destiny was written the moment he was born; that one day he would take over from his father and become Premier of Llanaria. As with most best laid plans though, they fell to rack and ruin when the situation on Llanaria deteriorated and the planet was plunged into a short, vicious war. When peace was declared, Raan stood aside as premier-apparent in favour of his sister and joined Starfleet.

Raan is a tall, heavily-build male in the prime of his life. Physically fit, he maintains an active workout schedule designed to build and maintain functional fitness rather than for aesthetics. A naturally high metabolism both aids and hampers him, as does his sweet tooth.

Raan’s appearance and bearing suggests him to be a thuggish grunt, and he has been known to use this to his advantage and allow people to underestimate him. However, he is highly intelligent and adaptable.

Born into a high-ranking llanarian family, he was educated as befit a planetary premier, and taught to analyse situations down to the nth degree. This and a high level of ruthlessness was required to survive in a society based on machiavellian lines.

This education was expanded during the brutal war on his planet which saw Raan commanding troops and fighting on the front line. Due to this, he realised that diplomacy does not always work and sometimes you need a bulldog.

+ Excellent grounding in tactics and strategy

+ Loyal when trust is earned

– Ruthless when triggered (can default to the ends justifies the means)

– Dislikes politicians and their games

To see how far his starfleet service will take him, not for the bling and braids, but to make a difference.

Raan makes a point of always trying new things, and gaining new experiences. Some he keeps, some he only tries once. His standard hobbies are reading on ancient cultures combat strategies, cooking and warball (a brutal rugby-like llanarian game).

Raan was born near to mid-summer in the year 2344 in a rare, and highly celebrated multiple birth, to the Llanarian Premier and one of his wives. The eldest of three he was educated from birth to take over from his father as llanarian premier, but that plan was derailed by his brother, born minutes behind him, Raal.

Jealous and bitter at the favouritism shown to Raan as the eldest, his brother worked behind the scenes to destabilise Raan’s standing in llanarian society, forming alliances with rival families, including their arch-nemesis, the Valat.

Aware that he had an enemy in the shadows somewhere, Raan was forced to defend his position as premier on all sides. Playing the game better than his unknown opponent, he successfully defended his and the Mason position, even against a vote of no confidence in his father’s leadership.

When his plans failed to yield the results he wanted, Raal led a rebellion that escalated quickly into a short and brutal war on the planet. During this time, Raan served in the military as the rebels tried to overthrow the premier’s government.

They were, eventually, unsuccessful. The premier’s forces prevailed but the war taught Raan that the political arena was not something he aspired to anymore; he far preferred theatres of war. Also aware that his physical resemblance to his now hated brother was an issue for the llanarian people, he stood aside as his father’s heir in favour of his sister, Illis.

With no role in public life anymore, Raan followed his dreams to travel the stars and joined starfleet. Since then he has served diligently on several vessels, rising to executive officer on the USS Damascus. He has since been approved for command, and invited to the Osiris Initiative to discover his assignment.

He was briefly married during his time on the USS Damascus. The relationship however, quickly fell apart due to cultural differences – namely the llanarian cultural tradition of multiple marriage and Raan’s lack of foresight that this might be an issue for his human wife. She left him, taking both the cat and their cactus collection. They still speak in a civil (and occasionally not so civil) manner.