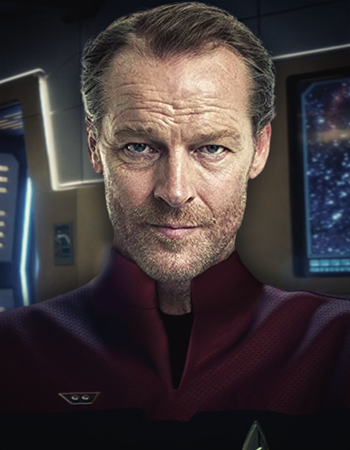 Rear Admiral Alexander Beckett (born February 6, 2346) is a Federation Starfleet officer currently serving as the Fourth Fleet’s Director of Intelligence. An astrophysicist and science officer by training, Beckett showed his prowess as a leader in the Dominion War, before serving as a starship commander for over a decade. He has ever since remained entrenched as a staff officer concerned with galactic politics over Starfleet’s mission of adventure, focused upon the realpolitik of the Federation's challenges.

Alexander Beckett was born in Edinburgh to parents whose families both had a long history of Starfleet service. Balancing their careers with their family meant one of them at any time took an assignment fit for parenthood, and so Alexander and his brothers rarely lived with both at once. Until he was seven he lived in Edinburgh as his father served as a Strategic Advisor at Starfleet Headquarters, then moved to Starbase 17 as his mother was assigned as Chief Science Officer. When he was eleven, his mother took a starship command; that his father was then forced to take a teaching post at Starfleet Academy so he could be the primary caretaker placed an undeniable strain on the family.

Young Alexander was unaware of this at the time. He was a fiercely intelligence and competitive child, who worshipped his mother as a brilliant scientist and then a captain and explorer. While talented at anything he turned his hand to, mental or physical, it became clear he wanted to follow in her footsteps, and the idealisation of her placed a further strain on his relationship with his father, who did the bulk of raising him.

But he was still the golden child, the ringleader of his younger brothers and darling of his elder sister. Rebecca Beckett had no desire to join Starfleet, having resented how often she was displaced in her childhood, and thus grew distant from the whole family save Alexander. She tried to encourage him to live his own life, but Alexander was too entranced with the idea of a career in the stars, and in turn helped his parents smother any inkling of a different life path his brothers might have had.

Accepted to the Academy at 18, he studied astrophysics but shouldered what additional courses he could in command, politics, and diplomacy, intending to be the epitome of the well-rounded Starfleet officer. He captained the Parrises Squares team and won an award for his work assessing engagement protocols with new stellar phenomena, proving himself a pragmatic as well as versatile scientist.

This continued through his early career as he graduated high in his class and was assigned to the USS Horizon as an Astrophysics Officer. Rapidly rising to hold authority over the laboratories and stellar cartography facilities, Beckett played an instrumental role in the Horizon’s four-year survey mission. He was particularly commended for his astute study of gravitational distortions leading to the discovery of a new classification of a black hole, when the Chief Science Officer had overlooked the initial discrepancy. But this also demonstrated the young officer’s ruthless streak, as he when questioned by the senior staff openly criticised his department head’s error as an unacceptable failure, taking full credit but damaging some of the crew’s trust in him as a team player.

His assignment to the Melbourne as Chief Science Officer was a promotion, but also the moving on of an officer whose ambition could be troublesome. The Melbourne was thrown into operations during the Klingon conflict of the early 2370s, and Beckett rose to the occasion in developing whatever tricks he could to anticipate the movement of cloaked ships. He had his first taste of command when the Melbourne was disabled by a Klingon ship that took some of the senior staff prisoner; when the Melbourne recovered and set a pursuit, Beckett led the away mission to rescue the first officer. Given the chance to destroy the Klingon ship while aboard, Beckett chose to spare them so they could retreat, which met a mixed reaction from the fraught crew of the Melbourne, but earned acclaim from Starfleet Command.

But he was still close with the crew of the Melbourne, drawn together in a time of conflict. This had a serious impact on Lieutenant Beckett when the Melbourne was involved in one of the early battles of the Dominion War and almost destroyed, limping away with heavy losses and extreme damage. Several of Beckett’s friends were killed, including Operations Officer Lieutenant Tomothy, whom he’d known since the Academy.

The Melbourne was dry-docked for repairs and Beckett offered compassionate leave. He refused, citing the crisis, and was instead assigned to the USS Hood as first officer, along with a promotion to Lieutenant Commander. This was a sudden step-up, but experienced officers were desperately needed and it was decided to give him a chance to fulfil his potential; thus did Commander Beckett see some of the heaviest fighting of the Dominion War.

It was here he met the Security Officer named Matt Rourke, a young man who had enlisted after failing in his application for Starfleet Academy. Beckett found himself relying heavily on the capable Rourke, taking him on as an unofficial bodyguard and point man on a lot of military operations. When the war ended, Beckett encouraged Rourke to return to the Academy, sponsoring him and pulling strings to make it happen; an unusually generous gesture, considering Beckett’s state of mind at the time. He lost one of his brothers at the First Battle of Chin’toka, while another was killed in the chaotic aftermath on the surface of Cardassia Prime even after the surrender had been formally given.

Beckett would stay on the Hood another four years after the war, but those who knew him would agree he was a changed officer. While he had always been ambitious and pragmatic, his interest in exploration missions waned for a growing focus on the political stability of the Alpha Quadrant. He encouraged the CO to volunteer the Hood for assignment along the Cardassian post-war border, assisting in what rebuilding efforts occurred there – from a security as much as a humanitarian perspective. He had also for some years been loosely romantically involved with a young woman on Earth, Yvette Banks, but after the war’s end proposed with uncharacteristic impulsiveness, assuring her they could make a marriage work despite the distance. His son Graham was born not long after.

They were divorced by 2381, but by then Beckett had been promoted to Commander and given his own ship, the Akira-class USS Fearless. Posted to the Romulan border, the Fearless dealt first with the odd behaviours of the Romulan military that it would turn out were the first political upheavals of the oncoming destruction of Romulus. While the Fearless assisted in the initial waves of refugees, including facing off against some Romulan military ships that tried to designate the desperate civilians as defectors, orders would change with the Attack on Mars. Starfleet withdrew its support for the Romulan evacuation, which included tighter border restrictions. Commander Beckett enforced these without hesitation. Under his watch several refugee ships were stopped from crossing into Federation territory, forced to settle on new slum planets in the shattering Neutral Zone. While these decisions were textbook in following orders, his ship’s logs still noted multiple objections from his senior staff on humanitarian grounds.

By 2386, the new border had begun to settle and Beckett was highly commended for his role enforcing Starfleet’s hard-line policy. He was promoted and given a more prestigious assignment, the Prometheus-class USS Achilles, charged with internal and border security. After the objections he had received for following orders from his senior staff, he sought loyalty first in selecting his new officers. While he initially was assigned a first officer he clashed with, calling a “woolly-headed idealist,” he managed to move Commander Benson on in 2 years. Matthew Rourke, the young man he’d helped to the Academy, was a newly-minded Lieutenant Commander by now, and was rapidly brought aboard as Chief of Security and Executive Officer. The two would grow distant over the five years they served together, Rourke too independently-minded and cynical to be the yes-man Beckett had wanted, but they still continued to respect each other professionally.

It was on the Achilles that Beckett also met his second wife, Iona, at the time a young lieutenant in the science department. She was almost 20 years his junior, in addition to the discrepancy in their ranks. While their relationship at no point went against regulations or guidelines, he was several times encouraged to avoid such an entanglement and chose to ignore this. She was entranced by his keen mind and he could match her training and intellect in all scientific discussions. Commander Rourke was noted as commenting that Beckett, in turn, was just desperate to not feel so old. Regardless, they were married and had a son in 2391, Alistair.

Advancing to the Admiralty

The Achilles confronted border conflicts for ten years across both quadrants, with Captain Beckett increasingly respected as a hard-nosed pragmatist and expert on the Federation’s security. Under his oversight, multiple Task Groups conducted security operations to protect Federation interests, as Starfleet looked more to its own in the decade after the Attack on Mars. This reputation saw him shortlisted for a flag officer rank, and in 2386 he was selected as Chief of Staff for the 4th Fleet, and promoted to Commodore.

Beckett thrived in the cut-throat politics of his role, ensuring those he saw of as the ‘right’ officers were put in the best places, treating careers like bargaining chips of political power and paint brushes on the canvas of what he saw as the future of the Alpha Quadrant. But this was not his ultimate ambition. This he achieved in 2399, not long after his promotion to Rear Admiral, where he leapt at an opportunity for a lateral transfer – and became the Fourth Fleet’s Director of Intelligence.

Admiral Beckett is convinced he has the right officers where he wants them, and now has the influence to impact the strategy of the Fleet. But none of this is for selfish ends. For all of Beckett’s vaulting ambition, for all his arrogant confidence in his own judgement, and for all his hard-nosed, pragmatic approach to realpolitik, he is perhaps worse than a selfish admiral. He’s a patriot.