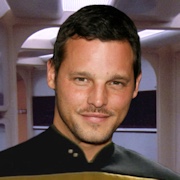 Alexander Koloktronis is a Starfleet officer who currently serves aboard the USS Shanghai as her Chief Operations Officer. Born in Greece, he attended the University of Athens prior to Starfleet, earning two degrees, in Political Science and Military Studies. He attended the Academy immediately afterward, graduating with honors. He's served missions aboard the USS McKinley, USS Indianapolis, and the USS Perseus, serving as operations officer aboard all three ships. He was transferred to the USS Shanghai in 2399 and assigned to the Devron Fleet Yards.

Alexander Kolokotronis was born in Kastri, Greece, to Ioannis and Sofina Kolokotronis, both military officers. The family is well known throughout Greece, the last name known throughout Southern Europe. Kastri was a smaller village, so he grew up very localized, learning much of what he knew from his father, an Earth military officer. His mother died when he was a teenager, so he grew up under the care of his extended family, including his uncle and brother, now both Starfleet officers. When Alexander turned 18, he applied to and studied at the University of Athens, where he got degrees in both Political Science and Military Studies. During his time there, he was a member of the universities’ basketball and soccer team. He applied to Starfleet Academy right afterwards and entered as soon as he was accepted.

Alexander excelled at Starfleet Academy, entering in 2388 as a Cadet. He studied both Operations and Aviation at the Academy and is a certified pilot and helmsman as well as Operations Officer. During his time at the Academy, he was on the firing team and a member of Red Squad, the elite group of cadets. He was injured in a shooting his second year when a mentally-ill cadet shot him in the leg with a firearm. He was discharged for 4 months in order to properly recover and returned to his studies immediately afterwards. He graduated and earned his commission in 2392, with a focus in Operations. He met his wife, Hailey Celine, at the Academy and were engaged after graduation. They married before his first assignment.

After Alexander received his commission as an Ensign he was assigned as an Operations Officer aboard the USS McKinley in 2393. During his tenure there he was promoted to Lieutenant Junior Grade and received a commendation from his commanding officer, Captain John M. Vincent.

Alexander left the McKinley in 2395 and received his next assignment, an Operations Officer posting aboard the USS Indianapolis, under Captain Ashlyn E. Kamaro. The ship was damaged in separate attacks and therefore spent much of her mission in spacedock, yet Alexander still received a commendation upon his departure for his excellent work aboard the starship.

After his discharge from the USS Indianapolis, Alexander was assigned to the USS Perseus as her Assistant Chief Operations Officer in 2397. The mission was cut short, however, in a surprise attack from rogue birds-of-prey, in which most of the bridge officers were killed. Alexander took command during the battle after all other ranking officers were killed, and was injured after a console explosion. The ship was lost. but most of the crew saved, and Alexander was promoted to Lieutenant immediately afterwards. He received the Starfleet Decoration for Gallantry as well. He served under Captain J’mah Gellau and Commander Robert J. Shaw. His injuries during the battle left him with thick facial scars and off and on bouts of depression, which he still hasn’t fully recovered from. While Alexander was recovering from his injuries, his wife was killed aboard a separate starship, and he has been left a young widower.

After the USS Perseus incident, Alexander was medically cleared and assigned to the USS Shanghai as her Chief Operations Officer, under Captain Sun Mei Xiang.