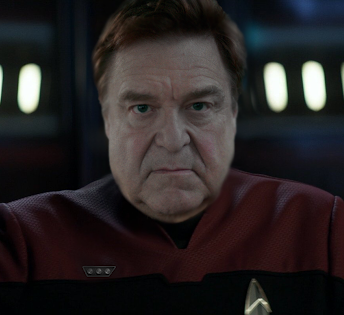 Robert Dowd is a former Task Force Commanding Officer of Task Force 38 and current 4th Fleet Communications Officer. He is known for his laissez-faire command style and somewhat larger size. Bob has never been one to turn down a meal nor a conversation. Growing up he always had a command of the language, often participating in debates and other extemporaneous speaking engagements. A career administrator, Bob spent little time in command of a Starship, however, the time he did spend - it counted. During the Dominion War, Dowd commanded a Galaxy Class starship that served as a diplomatic and staff-command ship, which meant he spent most of his time catering to the needs of others. Today he continues this mission as the punching bag for the press and defender of the 4th Fleet's command.

Robert is a stout, portly fellow who is often times shorter than many of his colleagues in Starfleet. He believes that one of the most important things about getting dressed in the morning is to always look like you’re about to on a hot date. As such, he keeps his appearance prim and proper, wearing appropriately sized clothing for his larger build. At one point in his life, he considered growing a mustache, but later realized that it would be too much work to maintain. Since then, he keeps his facial hair to a minimum, shaving almost every chance he gets.

His age is beginning to show through.

Bob, as he likes to be called, was never one to raise his hand in the academy and never looked to be the first in his class. However, he did join Starfleet against the wishes of his family. He likes to take the initiative only when it is safe to do so, and often times he likes to think before speaking – something he believes has been lost on the younger generation. Those who have been under his command in the past have only had positive things to say about him, however, he tends to be not concerned about what people think about him. It is his belief that he has gotten this far in Starfleet by marching to the beat of his own drum.

Bob served in mostly non-starship command capacities as a career administrator, with one notable exception. He served as the CO of a Galaxy Class starship during the Dominion War, ferrying diplomats and serving a command-ship for top brass. Most of the time he spent catering to the needs of those he was ferrying. However, the ship did take part in front-line conflicts when needed.

After the war, Bob continued to service in administrative capacities at Starfleet Command on Earth and its offices on Andoria, where he achieved the rank of Rear Admiral. Looking for new opportunities, away from the comforts of home, Bob urged his colleagues to send him to oversee the new starbase being built in the Delta Quadrant. They agreed, citing his superior attention to the needs of those whom he commanded – something that was important to being so far away from home. In addition to his responsibilities as CO of Starbase 900, he was given temporary command of the 4th Fleet’s Task Force 38. While in the Delta Quadrant, he oversaw the expansion of new exploration initiatives, and twelve first contact negotiations. Because of his success he was promoted to the rank of Vice Admiral.

Shortly after his promotion, the Mars attacks occured. He watched, horrified from the other side of the galaxy. He was immediately called back to assist the 4th Fleet in the area of communications where he has served since.