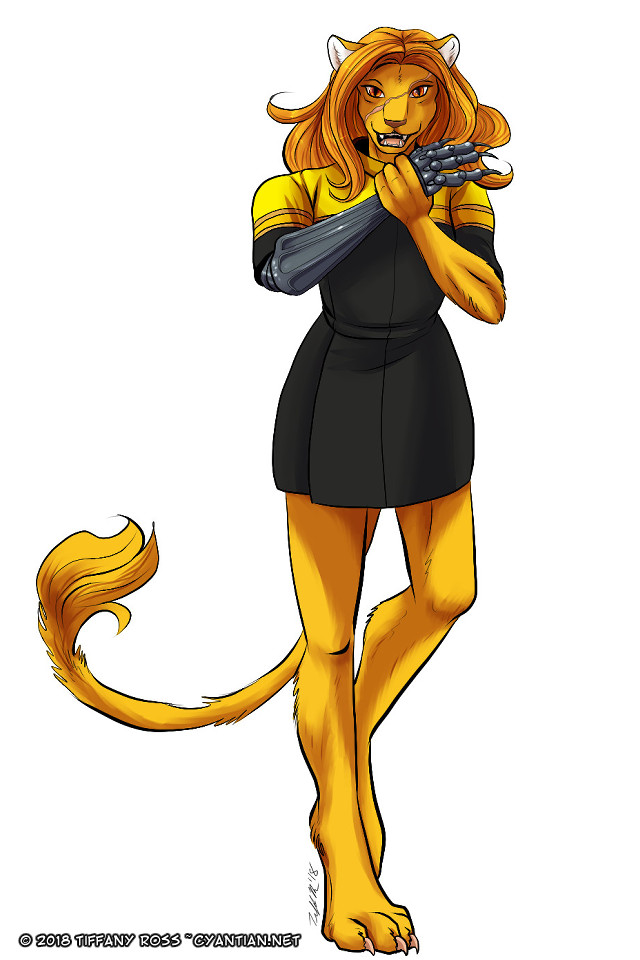 Shenzi K'Ress is an ace fighter pilot, a cyborg, a telepath, and a widow. She was born on an old Crossfield class vessel that had ended up in civilian hands, and had grown up on it. She adapted quickly to flying, and is now a flight leader. She is the mother of one daughter as well.

Shenzi was born on board an old Crossfield class starship that had gotten into civilian hands after being retired. She was an only child. From an early age she showed an interest in flying. Her life on the ship was pleasant, and she grew up around humans, being one of the very few non-humans on board. Shenzi’s telepathic abilities surfaced when she was 13, and her father, not really present in her life, took a sudden interest in helping her abilities grow, as well as teaching her the Kzinti language. When she was 16, she joined Starfleet Academy, and this was the first time she set foot (paw?) on a planet. She graduated in the top 1% her class as a fighter pilot, and was assigned to an Akira class carrier, the USS Shinano. She later met a Caitian, a fighter maintenance chief, who would become her husband, and the two had a daughter. She went on family leave when she became pregnant, and was reassigned to the Zuikaku when she was ready to return to duty. In mid 2388, when she was flying a mission, she got into a dogfight with several pirate fighters and managed to shoot them down with the help of her squadron mates. However, she had taken a hit, and was ordered to eject. She tried, but damaged the ejection mechanism in her panic, and then followed the next order to bring it in for a crash landing. Upon landing on the deck, her husband rushed in to try and get her out. He managed to pop the canopy when the craft exploded, killing him and maiming Shenzi. She made a full recovery after getting the mechanical replacements. Shortly after recovering, she got into an altercation with a superior officer over a grossly prejudiced comment in regards to her late husband. In the following court martial, she was demoted to Lieutenant Junior Grade, and reassigned to the USS Devonshire.