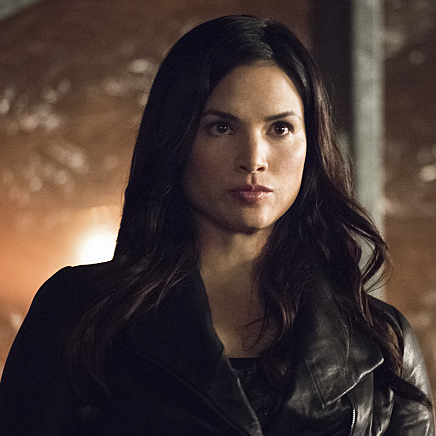 Senior Chief Shafir is an intelligence specialist in data systems stationed aboard the USS Polaris. A gifted hacker in a former life, she was recruited into Starfleet Intelligence as a field operator for her ability to extract data from any system even under the most high pressure circumstances. After a ten year hiatus following a year-long undercover assignment that caused severe psychological trauma, she's returned to Starfleet to serve on the USS Polaris in an intelligence unit tasked with a mix of external intelligence, internal investigations, and counterintelligence.

Ayala Shafir was born in 2357 to Lieutenant J.G. Ubaid Shafir, an intelligence officer, and Lieutenant Saahirah Shafir, an engineering officer, both serving on Starbase 133. As a large and busy starbase in the core of Federation territory, her childhood home was formative in her upbringing. She attended a school on the starbase that followed a rigorous Starfleet-approved curriculum, and, when schedules permitted, she’d accompany her mom to work and watch what she did. Ayala had a knack for computer systems, and sometimes, when her mother was otherwise occupied, her coworkers would entertain the cute kid by teaching her more about these systems. When not in school or traipsing around engineering, though, Ayala was pretty much left to her own devices, as her parents worked busy schedules and were rarely home. In her space time, she’d either explore the station and observe its denizens or sit in their quarters and cruise the computer network.

As often happens to bright children when left to their own devices, Ayala began to get into trouble during her teenage years, specifically, in her case, by sneaking into restricted areas or cracking computer systems. At first, station personnel thought it was cute and funny, but after Ayala crashed the power grid for the entire station, her misbehavior got the attention of the station’s Commanding Officer. He told the Shafirs they needed to either get their kid in line or find a place for her elsewhere. After a couple more incidents, the Commanding Officer had enough of Shafir. Without another option, her parents sent her back to Earth to attend a boarding school just outside of San Francisco.

While the boarding school continued to provide Ayala with a solid education, she resented everything about the situation. She had stellar grades but became an almost permanent fixture in detention for stunts like breaking into the school’s grade system and giving everyone an A. She also started sneaking out after hours to go into San Francisco, using her knowledge of Starfleet’s protocols to slip into Federation facilities and just generally cause mischief. This culminated in her first arrest when she was seventeen for breaking into a Starfleet mess hall and recalibrating the replicators to produce everything ordered without their containers, so a cup of coffee would just become a flood of coffee all over the replicator and the floor.

After Ayala graduated, much to the relief of the boarding school administrators, rather than go off to college, she just took a job as a barista at a cafe in old town San Francisco. By night, simply for the amusement of it, she’d hack into systems or develop malicious programs that she’d distribute through a pseudonym Sayidat Alfawdaa, the lady of chaos.

In 2366, her pastime caught up to her when a virus she wrote was used by a terrorist organization to cause a systems failure on a Federation outpost that killed eight people. Starfleet Security, who’d been tracking the online activities of Sayidat Alfawdaa for some time, moved in and arrested her. At her hearing, she was found guilty, but, while awaiting hearing in a Starfleet holding cell, she received a visit from Lieutenant Commander Himitsu, a Starfleet Intelligence officer who gave her two choices: she could either spend six months at the New Zealand Penal Colony or she could have enlist in Starfleet Intelligence. As it turned out, her father had called in what favors he had, and Lieutenant Commander Himitsu, who ran an outfit out the Starfleet Intelligence’s Technical Analysis Bureau, just so happened to have a need for people with her skillset. He also knew that hackers were incredibly goal oriented and, based on her history, didn’t believe she had any malicious intent, just a lack of purpose. Ayala, for her sake, was not keen on spending time in prison, so she accepted the offer.

Due to her past, Crewman Recruit Shafir was kept on a short leash on Himitsu’s data systems team at first. Far from a true criminal though, she took to and excelled at every task she was given. She also made close friends with her teammates, some of them career Starfleet, and others, like her, hackers that had made the transition. Ultimately, wrote one of her supervisors, “All Ms. Shafir needed was purpose.” By the end of her first year in the Technical Analysis Bureau, Shafir had gained the trust and appreciation of her team, and any fears of her misdeeds had passed.

During Shafir’s first year with Starfleet Intelligence, her supervisors identified that not only did she gifted behind the terminal but also, they believed, could she be a good infiltrator. She’d spent her early years observing passerbys on Starbase 133, while her later years were spent sneaking into Federation and Starfleet facilities, so with proper training, they believed she might also be suited for infiltration and field work. And so, as she entered her second year and received a promotion to Crewman Apprentice, she also began studying to become an infiltration specialist.

In 2379, Crewman Apprentice Shafir was sent into the field for the first time. During that mission, everything went wrong and the team ended up in a firefight. Shafir kept her cool and not only did she cracking into the target data system but she also crashed their internal sensors to allow the team to escape. For her initiative and her ability to keep cool under pressure, the team lead recommended her for for field training. This led to her reassignment, later in the year, to the USS Nyx, a field operations vessel attached to Starfleet Intelligence Technical Analysis Bureau.

During Crewman Shafir’s time on the Nyx, while her skills behind a terminal were already well acknowledged, she took to infiltration like a natural. To her, it was simply hacking the mind. Many times over this period, she would again go into the field, each time executing successfully on her task no matter how chaotic the scene around her. In 2380, she was certified as an infiltration specialist, and a year later, she was recommended for field operations training and transferred back to Starfleet Intelligence Headquarters on Earth. During field operations training, she learned everything from communication protocols and drop site techniques to hand-to-hand and phaser combat. Her goal-orientation served her well, and she emerged from a year of training not just a better hacker and infiltrator, but also extremely physically fit and a significantly more refined intelligence operator.

Petty Officer 1st Class, and then Chief Petty Officer, Shafir, worked with Starfleet Intelligence Special Operations for four years. As opposed to many in the public and even in the other bureaus of Starfleet Intelligence, she had absolutely no moral or ethical qualms with the work they did. Her first two years were spent operating in the Triangle on Special Operations Team 6, and then, in 2377, she traveled to the Gamma Quadrant as part of Special Operations Team 9 to infiltrate a growing insurgency movement Starfleet Intelligence had been tracking known as the Consortium. Using her real and verifiable backstory as Sayidat Alfawdaa, a criminal convicted of sabotage and forced into Starfleet service, she was able to gain their trust and spent over a year undercover with the Consortium. She was part of the attack of New Bajor, biding her time as the Consortium managed to set up a blockade, but right in a critical moment during the Starfleet counterattack, she let loose a virus that disabled a number of Consortium vessels, helping assure Starfleet of victory. She was captured, along with other members of the Consortium, only then revealing her true identity and providing substantial intelligence on as-of-yet unidentified Consortium operatives that Task Force 9 then apprehended in short order.

Shafir was promoted to Senior Chief following her return to the mainline Fleet, but she struggled to find her footing. Her time undercover did a number on her, and she found herself struggling with guilt, especially around choices she made that led to the loss of Federation lives in order to preserve her cover. Ultimately, she could not get over the hump, and, by request, she was granted an honorable discharge from the Fleet.

For a few years, Shafir drifted aimlessly, including some time on Free Cloud and a brief stint with the Fenris Rangers. Eventually, she was approached by Mr. Jake Lewis, a former Starfleet officer and the owner of Sebold Logistics, a private intelligence contractor. After half a decade of no direction, and low on funds, she accepted. At Sebold, she found herself surrounded by a number of former intelligence professionals from not just Starfleet but also the former Romulan Empire. She worked with Sebold Logistics for about five years, until Lewis returned from a meeting with Starfleet on Starbase Bravo, one called the “Osiris Initiative”, and announced he was returning to Starfleet. While most of the team remained with Sebold, Shafir decided to give Starfleet another shot, re-enlisting alongside Commander Lewis for an appointment on the USS Polaris.