Before even boarding the Arcturus, First Officer Lancaster must defeat a deadly plot with his crewmate's lives hanging in the balance.

As the Arcturus prepares to depart Epsilon Indi Station for the first time under the command of Fleet Captain Elizabeth Hayden after four long years of construction, she awaits the final members of her 2,500-person strong crew. Executive Officer, Captain Michael Lancaster, along with the ship’s Security Chief, Communications Officer, and his husband, Dr. Luca Sheppard, while still en route with one of the Arcturus‘s new Waverider shuttles stops to respond to a distress call from the Raven-class transport Janice Rand, and finds himself and the rest of the newly-assembled crew thrust into the heart of a plot against their mission before it can even begin. 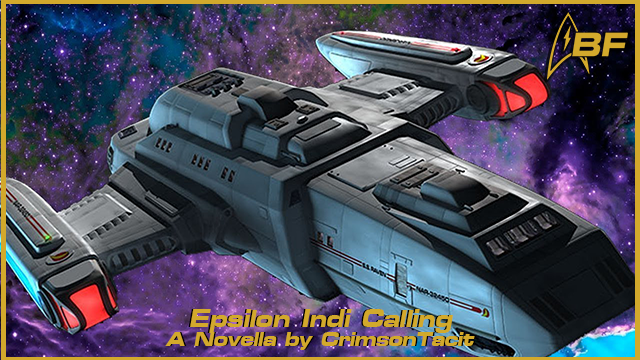 The final checks to get the Arcturus ready for launch had gone flawlessly. Every system from the warp engines straight down to the holographic waiters in the ship’s lounges were ready and waiting for the ship’s trial cruise to Barzan II, and beyond there to the waiting Delta Quadrant. Fleet [...]

The senior-most officers had impressive quarters located in the superstructure under the bridge, which, unusually for a starship, each spanned two decks. Fleet Captain Hayden’s quarters took up the forward end of decks three and four, with Captains Lancaster, Anjar, and Okusanya each had suites [...]

Captain’s Log, Supplemental. Thanks to the swift thinking of Captain Lancaster and the intervention of the Atascadero, all four of my officers are now safely onboard the Arcturus. While Dr. Sheppard and Lieutenant Ohala have already been cleared for duty, Lieutenant Evandrion and Captain [...]

Sheppard was seated at the bridge’s tiny science station. They had sensors back online, but there was nothing of interest out their in the blackness. The helm console had been locked on a fixed course: directly to Epsilon Indi station at a rate of speed that was far above the ship’s safety [...]