2400 has been a year of upheaval. First the Century Storm endangered millions close to home. Months later the collapse of the Romulan Star Empire threatened the safety and stability of the whole Beta Quadrant. But the latest disturbance comes from far, far away, and rather than a new threat, it slides in with the double-edged sword of something perhaps far more dangerous: 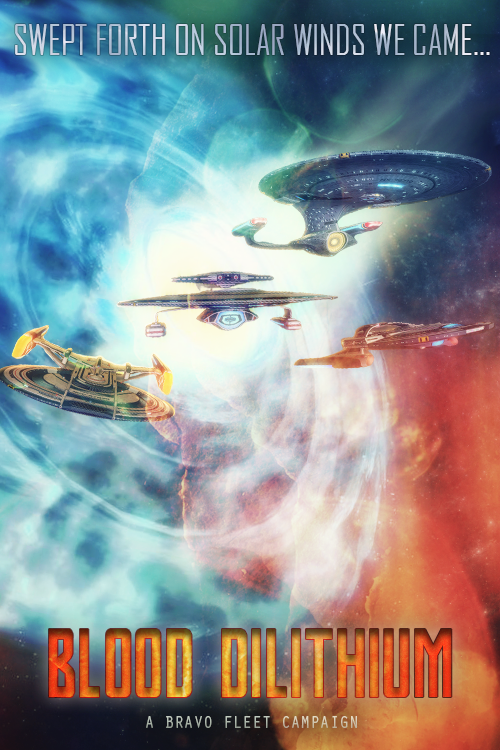 A massive subspace phase pulse ripples across the Gradin Belt, deep in the Delta Quadrant. On worlds and asteroids near spatial anomalies, dilithium crystal deposits bloom in its wake. Privateers and empires alike scramble for control of newly resource rich systems. Alpha Quadrant merchants and traders pour through the Barzan wormhole to get in on the action. They’re quickly hunted by Hirogen, stranded on the subspace sandbar, and ensnared by the Telepathic Pitcher Plant; it’s clear they are unprepared for the brutality of the Delta Quadrant. Far out beyond Starfleet’s supply lines, in an unforgiving region outside the Federation’s influence, will your crew come to their aid? Can your scientists find out how this dilithium came to be? And why, on getting near it, do telepaths experience such an intense, inexplicable terror?

Campaigns are writing events; they last for several weeks and introduce a threat or challenge to some region of the galaxy. For the duration, members across the fleet will write about this plotline, telling the stories of how their ships and characters confront their own enemies and obstacles. Together, we build a grand narrative of a pivotal event in the fleet’s timeline.

Past campaigns have been run by the Intelligence Office. Going forward, campaigns run independent of the annual Fleet Action will be hosted by one of Bravo Fleet’s Task Forces. Still open to all members, these campaigns give TFs a chance to develop their mandate or headquarters region. The nature of these challenges demands the whole fleet’s response, but regional command falls to that Task Force – and planning, writing, effort, and credit goes to its staff!

As such, I am proud to announce that while the Intel Office will supervise, Blood Dilithium has been developed, written, and will be hosted by the great minds at Task Force 17! And I for one am giddy for what they have planned. Watch this space for future releases: fiction, teasing, a briefing!

The Blood Dilithium campaign will begin Tuesday, 1st November and run for 6 weeks on BFMS until Monday, 12th December. These dates have been chosen for a specific reason: a November start means the campaign will be a part of a Bravo Fleet push for members to participate in NaNoWriMo – National Novel Writing Month. This worldwide community gives writers a ‘simple’ challenge: to write 50,000 words of a novel in one month (or, hell – set your own target!). I’ll be talking more about that over the next month, but the long and short of it is simple: smash out those words and have some fun.

Oh, and one more thing. A tiny thing, really. The Intelligence Office is pleased to announce a new member in our ranks. It’s very fitting, really, seeing as he’s the mastermind behind Blood Dilithium itself. Captain Erill’Yun Mek will continue in his role as TF17CO, but he’s also going to be stepping up as the new Bravo Fleet Deputy Intelligence Officer. Please join me in warm congratulations!