One of the things that helped Deep Space 9 feel like a real frontier space station, a town in space, was its promenade: a place where beings of all shapes, colors, beliefs, etc. socialized, ate, drank, and traded. Locations like Quark’s Bar and the massive observation deck on the promenade are iconic science fiction settings, providing a place for characters of all walks of relief to relax, celebrate, and contemplate space. The Bajoran Temple emphasized the culture of the Bajorans who owned the station itself. Even the Replimat provided a regular backdrop for the conversations between Dr. Bashir and Garak, who also had their infirmary and tailor shop located in this bustling area.

Bravo Fleet has three starbases (Starbase Bravo, Starbase 72, Starbase 86), a fleet yard (Devron Fleet Yards), and a mobile headquarters flotilla (Task Force 17’s Lead Expeditionary Group) all of which serve as homes away from home for our ships. They are each unique, bustling areas that offer unique storytelling opportunities both for members who do not yet have their own ship but also to provide R&R between missions.

As part of Operation Homestead, the purpose of this competition is to reward members for fleshing out aspects of the fleet headquarters and the four task force headquarters, including TF17’s Forward Expeditionary Group. Specifically, this is a combination writing and graphics competition that asks members to create a location (in writing and visually) and a person associated with that place (in writing and visually) to give other members appropriate places and faces to play off of in their own writing. This will help to give each location a flavor and a character that can only be built up by sustained collaborative writing.

All of this will be produced directly on the Bravo Fleet Wiki. The grading criteria reflect good Wiki habits, which include using templates, creating links from one article to the next, and the use of visuals.

Basic Requirements of an Entry

An “entry” is up to two separate wiki articles: First, a recreational or commercial venue relevant either to any Task Force headquarters or Starbase Bravo. Second, a person associated with that place, such as its owner/proprietor or an employee.

Content will be created directly on the Wiki, and entries will be submitted to the competition form on the BFMS with links to both articles created for the entry, along with the descriptive statement outlined in the next section.

This is not an all-inclusive list, so get creative!

Detailed Description of an Entry

I found the images for the bistro on an architectural website describing Le Bernardin, a famous restaurant in New York city that seemed suitable to stand in for Vandorin’s. The image for Esterra Vandorin is an edited still of Lorraine Toussaint, superimposed over a restaurant backdrop and with an oil brush filter applied.”

NB: Don’t bother including additional context here beyond talking about graphics, as it won’t be factored into your scoring. If you have something to say, say it in your articles!

Points are awarded for including various elements of a complete set, before quality is assessed. This ensures that, all things being equal, two entries of the same quality will have a tie broken based on which entry has more of the following elements:

After the initial scoring, each entry is assessed using the rubric here, earning up to three points in five different categories, for a total possible score between the initial points and the rubric of 23. Ties are unlikely but will be broken by the judge’s discretion. 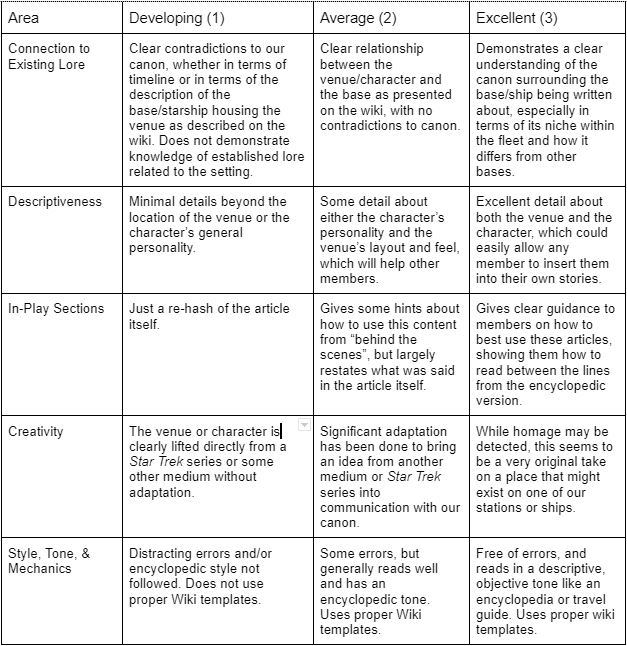 The character you submit should not be a character you intend to remain your own personal character, as once they’ve been submitted here you’re releasing them to the fleet as an NPC for anyone’s use.