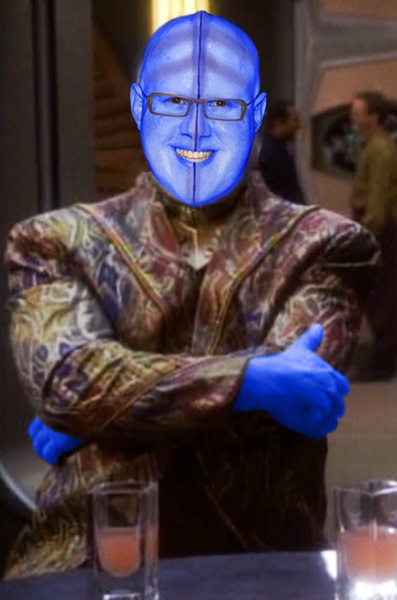 Crumm Widdy is a young and virile Bolian of average height and weight. He will likely be found wearing the best and most current of Bolian fashion. As he is allergic to Retinax V, he is required to wear corrective lenses. Of the varying shades of blue Bolians exhibit, Crumm's is of the brighter and more vibrant variety. While this does not mean much amongst Bolians, some outsiders view this as a sign of stature within the Bolian community. A jovial man, Crumm is almost always smiling and is a joy to be around.

Born in 2340 on Bolarus IX, Crumm Widdy called Bolius City home for the first twenty years of his life. He was raised by a trio of parents, all of whom had excelled in Bolian cuisine. It was during this time that he developed his passion for food and service. At the age of twenty-one, he wed his first wife, Neeza. Shortly after, they welcomed their first child, Nixx. When he reached twenty-five, he married his second wife, Kinn. While on their honeymoon, the Widdy’s met Mazz and Ayen Koolas, who were made co-spouses in short order. Inside of two years, their family was complete.

Crumm spent five years studying at the Bolian Culinary Academy. Feeling his studies were incomplete, he set out on a tour of the galaxy in order to achieve his goal of becoming a master restauranteur.