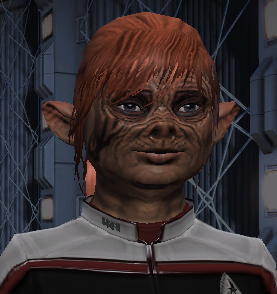 Salda is a middle-aged Tellarite from a long line of politicians and diplomats. She has gradually climbed the ranks throughout the years, starting off as a science officer, while also having training in Diplomacy at the Academy and throughout her life from her family. Roughly thirteen years ago she was Assistant Chief Science Officer, but it was cut short as the ship was destroyed during the Dominion War. Luckily she survived, and after the war, she became Chief Science Officer after a promotion. A few years later though, the XO was killed on an away mission and she replaced him. Several years later, she was given the Cardiff-class U.S.S. Voltaire to start her command.

Salda was born on Tellar Prime to a family filled to the brim with politicians and diplomats. She was the youngest child out of three, and throughout her childhood, she had politics, debating and more as a part of her life.

It came to a point where she was just sick and tired of the political and diplomatic scene, so when it came time to choose what to do- she refused to follow in the footsteps of her family. Instead, she decided to join Starfleet for something new, something fresh.

She first applied when she was nineteen but did not get the correct grade on her exams, but got high enough that she was qualified to try again. Roughly a year later she finally got admitted into the Academy.

Out of the options, she went for a science field and did very well in it. To please some of her unagreeable family members, she also took diplomatic classes.

Soon after graduating, she was assigned to the U.S.S. Bismarck as a Science Officer. By the time she was on the ship, the Dominion War had started and they were in action constantly. Salda was barely on the ship more than a year when it was destroyed by enemies, though she luckily was able to get to an escape pod.

For her actions, she was promoted to Lieutenant Junior Grade and assigned to the U.S.S. Raposa as the Assistant Chief Science Officer, where she would be for the remainder of the Dominion War. Salda was on the ship for another five years in the same position, finally earning another promotion in 2380 to Lieutenant.

Her superior was transferred off the ship soon after her promotion, which led to her becoming the Chief Science Officer of the U.S.S. Raposa.

For another three years, she would be in that position, until the Executive Officer was killed on an away team, in which Salda was chosen to replace them. As executive officer, she excelled for four years until offered her own command- which she gladly took.

Along with her new command, she earned the rank Lieutenant Commander, where she has been ever since.