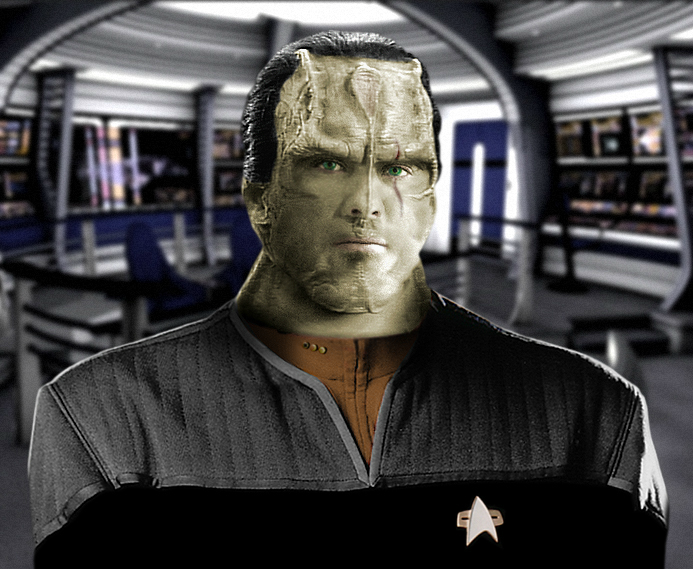 Hadir is rough around the edges and suspicious of everyone, just as everyone is suspicious of him. He is loyal to fault once someone has earned his loyalty and friendship. Thus far he is loyal to Starfleet and it's people. As no one has shown him any compassion except for Starfleet. Hadir has a photographic memory and is uniquely adept at languages which comes from not only his Mind Training but from his innate abilities as a Cardassian. Hadir wanted to become the first Cardassian in Starfleet, which he achieved. Now he wants nothing more than to prove that not all Cardassians are liars, he for one is loyal to a fault. He now wants to become the first Cardassian Captain in Starfleet. Hadir spends his time studying ancient Earth history. Particularly the periods known as the Dark Ages.

Hadir was born in May of 2348 on Cardassia Prime. He grew up on Cardassia Prime and was groomed to join the Obsidian Order. He had a typical Cardassian childhood focusing on military tactics. This upbringing included the standard mind training. In 2354 he graduated from the Primary School his Te’alakesh (teacher) identify him to be suitable for the Obsidian Order. He is entered into a Secondary School for this purpose. Hadir was an intense child as being the son of a military man will cause one to be. His mother was a farmer and a homemaker.

When he was 10 years old they came to take his molar out. The molar is to be used for identification purposes and is a standard rite of passage into adulthood for all Cardassians. However, Hadir hated it and his father had to force him to submit to it.

The rest of his adolesence was standard as Cardassian childhoods went. Hadir had little friends and fewer mates as he got older. This was due to the color of his eyes, which was believed to be a birth defect.

In 2363 when Hadir was 15 his father was promoted to Gul of the Obsidian Order, replacing Enabran Tain when Tain retired from that post. Hadir graduated from Secondary school and was assigned as Gul’s Assistant, helping his father in all functions. All the while being groomed to replace his father when the time was right.

Shortly thereafter Hadir began to witness the atrocities being done to Bajorans by his people. At first he tried to tell himself that this was for the betterment of Cardassia, and that Bajorans were lesser beings. But that never took in his head and he couldn’t buy that. It wasn’t until he saw a Leget threatening to kill to Bajaoran children whose only crime was bumping into him that Hadir decided to get involved. He stopped the Leget and got a scar on his face for his troubles.

Hadir ran into the Bajoran underground to hide from the wrath of his father. It was here that he met some Bajorans in the Ornathis Resistance Cell. Hadir volunteered to help the cell in any way he could. In return the Bajoans will hide him from his father and the order. It is here that Hadir finished out the berth of the Dominion War.

In 2370 the Federation arrived at Deep Space Nine at the behest of the new Bajoran Provisional Government, Hadir is still in hiding on Bajor and is now viewed as a traitor to Cardassia. However, with the encouragement of the Bajorans Hadir met with some officers from Starfleet, he told the officers what was on his concience and the attrocities. The Starfleet officers agreed to put Hadir in touch with the Cardassian Liberation Front. They told Hadir that if he wanted to help Cardassia then he needed to fight with his people and free Cardassia from the Dominion.

In secret Hadir traveled to Cardassia Prime and met with some representatives of Leget Damar. He is deemed to be trustworthy and with the amount of tactical knowledge he has Hadir is given missions to strike against the Dominion. Hadir served the rebellion with distinction.

When the Dominion is forced from Cardassia Hadir decided to apply to join Starfleet. As the urge to explore the stars was moving him. When his application is recieved by Starfleet command it is deemed that allowing him enterance into the academy would be holding true to the new treaty with Cardassia and so in 2378 at the age of 30 Hadir Prenar became the first Cardassian in Starfleet.

He completed his four years in the Academy with relative ease and grauated with honors. He focused his schooling on Tactics and Intelligence gathering as that played to his stronger suits. He had few friends in the Academy most of friends that he did have were human and klingon. Hadir made an effort to steer clear of Bajorans whenever possible. He felt too guilty on behalf of his people.

Upon graduation the new Ensign Prenar is assigned to the Starfleet Diplomatic Corps to assist in the cultural differences with Cardassia. It is at this point that Hadir learned that his father survived the war and the rebellion and is in hiding somewhere.

In 2382 the stars were calling and Hadir asked for and is granted a transfer to the USS Ticonderoga to serve as the Deputy Chief of Security. On an away mission Hadir is assigned to protect the Captain. The Captain was in a negatiation with a hostile people. Captain Jenkins was attempting to negotiate passage through their space. Hadir noticed a small twitch in the alien’s eye which told him that the alien was about to attack. Hadir leaped into action saving the life of his Captain and took a phaser blast to the shoulder for his trouble. While laying on the ground he smiles at the Captain and says sorry for ruining your negotiation. Hadir is promoted to Lieutenant Junior Grade for his actions.

Hadir’s time on the Ticonderoga is storied as he waded through human interactions. He even had a short dalliance with a Chief Warrant Officer from the Science Department. She was the only human woman that Hadir ever met that could be a match for a Cardassian. Alas after a short interlude duty called and Hadir was transferred to the USS Tudor to be the Chief Tactical Officer of that vessel.

Hadir is known as a fierce friend and one who would continue to risk his life for those that need it. Over the next years he focused on his work and duty all the while missing the only love of his life. The promotions came as did the accolades. Prenar was proving to Starfleet that he was an incredible asset.

Then in 2389 the day finally came. Hadir was called into Captain Tompkins Ready Room aboard the USS Tudor. It was here that the Captain congratulated Hadir on his promotion to Commander and handed him his new orders. He was ordered to the USS Valhalla for service as the ship’s Executive Officer. While aboard the Valhalla Hadir served under the command of Captain Richard Wayne. It was Captain Wayne that taught Prenar to loosen up somewhat. That lesson worked and Hadir made quite a few friends, not the least of which was the one who got away. The only woman that he loved since leaving Cardassia, Jewel Bolivar.

His time on the Valhalla saw him gain numerous honors but it was his method for saving the ship from residual Dominion forces in the Gamma Quadrant that really got him noticed. In 2395 about six months after the Gamma Quadrant incident Hadir was called into Captain Wayne’s Ready Room. Captain Wayne had the duty of informing Hadir that he was to be the first Cardassian Captain in Starfleet. The promotion was bittersweet for two reasons. First he was going to have to leave Jewel and the Valhalla. The second was that although he was promoted he would not be given a ship. It seemed that Starfleet had other plans for him.

Hadir Prenar was ordered to Starbase Port Royale to serve at the right hand of Commodore Domingo Martinez. The station is located in Cardassian space. Hadir thought while staring at the PADD this couldn’t be right, but here it is signed by the Fleet Admiral.

As thoughts of reuniting with his mother and getting even with his father danced in his head. Hadir smiled as he walked from the Ready Room, it seemed that everyone could go home again.