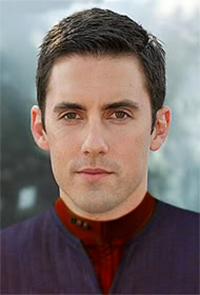 Scott Parker is the average officer that has always aspired to be the best in anything he tackles. As early as his start in school, he has preferred to always be seen in the main spotlight, unafraid of showing off. At five foot and ten inches, he isn't the tallest in the room, yet he always felt as if he was and made sure everyone else felt the same. This trend in Scott's personality continued until his incident on the USS Fearless, 2386. After the deadly accident, Scott's demeanor completely changed. Following his rescue, court marshal, and year long hiatus, Scott prefers sitting back and not being the center of attention, accepting a drink over a handshake. His personal appearance has dropped from prestige condition to rather lackluster; but, is beginning to turn his life around once h

Parker was born in the year 2353 on the planet of Turkana IV, a once forgotten Federation colony that was more of a hell world than it ever was a home. ScottParker holds onto a dozen shattered and fragmented memories of his past on Turkana IV, but the majority of his past has been blocked by his own barriers as he rarely reflects back on his childhood. He is often envious of childhoods and families that others have, for his was a childhood of hard labor and loneliness. He had to leave Turkana IV in order to find a sense of belonging and a family. He never knew his mother, and only vaguely recalls his father. Due to the intolerable conditions on Turkana IV, Parker’s mother died shortly after giving birth to her child thus entrusting him in the care of Parker’s father, an ore minor.

The planet was rediscovered by the United Federation of Planets who had sent a diplomatic team in hopes of slowly reestablishing the lost New Paris colony. However, the diplomats were met with heavy resistance and were forced out by combined opposition from the warring factions of the Alliance and the Coalition, leading the Federation diplomats to be extracted from the planet in 2352. Some of the Federation diplomats, however, were not deterred from the threats and remained on Turkana IV in order to continue the rebuilding of a Federation presence and Government on the planet.

Over the next few months, the foreground for a Federation provisional Government was in the beginning stages. However, due to mounting resistance from the Alliance and the Coalition and the continued public executions of the remaining Federation diplomats, the provisional Government failed before it could be put into effect. Peace efforts and rebuilding on the planet deteriorated; The USS Renegade was sent to retrieve the remaining Federation diplomats from the planet. Parker’s father continued to raise his son on the turbulent world of Turkana IV until his death in 2358, leaving the child orphaned without a family.

The orphaned ScottParker struggled to survive on the streets of Turkana IV’s largest city as a common thief who would pickpocket in order to survive. This only lead the child to develop the necessary survival skills to avoid the rape gangs and drug lords of the planet into his early teen years. In 2361, the USS Potemkin established contact with Turkana IV but was given warning that if anyone from the Federation stepped foot on Turkana IV, they would be killed. This lead to a period of silence between Turkana IV and the Federation for several years.

As a teenager, ScottParker fell into an even darker place within himself. Yearning to escape the pains of Turkana IV, Scottstarted to experiment with joy dust, a mood altering substance to which he soon became addicted to. Teenaged Scott stopped caring about anyone, even himself and became reckless. This is a part of his life that he does not discuss openly, and has taken years of counseling in order to move past. During this time, Scottdid anything he could to keep himself happy through joy dust. He would steal weapons from the Alliance and sell them to the Coalition or steal from the Coalition and supply to the Alliance depending on who would pay more. Eventually, he was able to straighten his life out in time and quit using joy dust.

The several years of silence between the Federation and Turkana IV ended in 2368 when a freighter crash landed on the planet. Her surviving crew were taken hostage by the Alliance, and a Federation starship had come in response to the distress call. Scott, who was being held by the Alliance as a fugitive at the time, had formed a friendship with the freighter’s Captain. When the crew of the freighter were rescued by Starfleet officers, the freighter’s Captain insisted that Scott was going with them.

Scott requested asylum from the United Federation of Planets which was officially granted in 2368. Scott briefly settled down on Earth in the village of Clifton in England. However, he applied to Starfleet Academy as a means to give back to the Federation what it had given him. He passed all the entrance exams and was admitted to Starfleet Academy in 2369. At the academy, Scott put himself on a command track staking classes on diplomacy and command while focusing on Flight Control. When his second year at the academy came around, he had been selected as a member of the Academy’s Sapphire Squad, eventually escalating himself to the Squad’s second in command by 2373 when he graduated from Starfleet Academy, finding himself graduating during wartime.

Ensign Scott Parker’s first assignment was to the Sabre-class USS Devore in a rather well to do fashion as he served as a Flight Controller from 2373 to 2375. His service during the Dominion War had provided Scottwith experience and decoration. He was reassigned to the USS Armstrong in 2375 where he served for several months on a temporary assignment. After his stint aboard Armstrong, Scott was transferred back to the USS Devore. This lead to a subsequent rank promotion to junior grade Lieutenant in 2376 with the added perks of replacing the Chief Flight Controller. As a valuable member of Devore’s crew and part of the Senior Staff, the Captain and First Officer of the Devore were not about to let Parker go anytime soon.

ScottParker continued his service aboard the USS Devore as Chief Flight Controller for several years more but requested a departmental transfer aboard the Devore when the Flight Leader of the ship’s Starflighter Squadron had requested to transfer to another starship. The requests were approved in 2382 and junior grade Lieutenant Parker became Chief Operations Officer for the USS Devore. 2383 brought about changes in the chain of command structure as Parker was promoted to full Lieutenant, continuing to serve as Chief Operations Officer in addition to ascending to Second Officer.

Lieutenant Parker continued to serve as Chief Operations Officer and Second Officer on Devore for another few years. However, in 2385 an opening on the Steamrunner-class USS Demeter for First Officer came about and Lieutenant Parker felt that it would be a wise career move with Starfleet. He put in for the request and was approved. He transferred over to Demeter and back into the Command department as First Officer. The Demeter’s Commanding Officer was impressed by the ambitious application of a young Lieutenant. It was certainly a risk, but it was a risk that paid off for both parties and for the Demeter as well. The Lieutenant was promoted to Lieutenant Commander in late 2385 and remained on the Demeter into late of 2386.

Lieutenant Commander Parker was offered a promotion to Command and the position of Commanding Officer on a Intrepid-class starship in late 2386 due to the recommendation of the Demeter’s CO. It was a dream posting regardless of where she ended up going and he quickly accepted it. The starship was scheduled to launch late November or early December of 2386 in order for her crew to welcome in the new year of 2387. Commander Parker boarded the USS Fearless in December while the starship awaited to leave shipyard after undergoing extensive repairs and refitting. The starship was re-launched a few days afterwards and is on her first mission since having been recalled in 2386.
2387, however, was Commander Parker’s faithful year. Only three months into his new command, he received orders to take the Fearless into the Badlands to monitor the increasing military buildup and advance of the Cardassian Orders. After making their way into the turbulent area, the Fearless was caught in a gravitational pull and rocked with plasma storms. The ship suffered extensive damage while Parker initially froze in the center seat. Within minutes, there were multiple hull breaches and many deaths. His final command was to abandon ship in hopes that the surviving crew made it safely out of the area. In the end, one-hundred and twelve personnel out of the original compliment of one-hundred and seventy-five made it out alive.
Following the loss of the Fearless, Parker was court-marshaled under Starfleet General Orders. His nearly perfect record prior to the incident would be highlighted during the trial which ultimately returned a verdict of not guilty; though he still had a lot to learn before continuing his career. Roughly a year passed between the legal action and his appointment as CO of the Ark Royal, an Ambassador Class ship assigned to the same Quadrant where he lost the Fearless. That year in-between assignments did not go well for him. He lost himself in the bottle and many times found it hard to focus on the task at hand. His appearance was usually less than normal. However, it was Starfleet’s hopes that he had not expended all that he had. The Ark Royal’s strict mandate of scientific exploration and diplomatic envoy would hopefully turn his career, and life, back around.