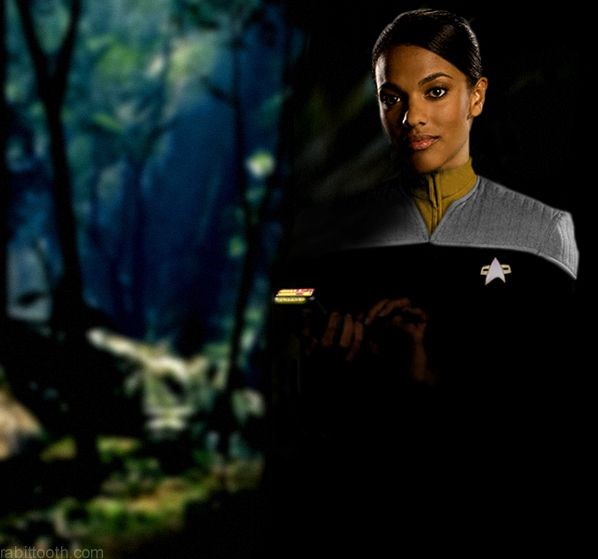 Amanda is of average height for a human woman. Her soft brown hair falls down slightly past her shoulders to her ribs. She carries herself with a somewhat detached air: Not because she is aloof, but because she frequently has a lot on her mind. Her green eyes are typically focused on something just beyond or behind the person she's talking to or the monitor she's working on. Amanda's style of command can best be called "relaxed." She does not take herself too seriously, and prefers to surround herself with officers and crew of the same caliber. She is confident in her abilities as a command line officer, and it shows in the way she converses with her crew.

Amanda was born the youngest daughter in a very large American family from Seattle, Washington. From the time she was very young, her parents, aunts, uncles, and siblings impressed upon her that the family name was one of honor and greatness, and that no matter what she decided to be in life, she must strive always towards excellence. This resounded in her and continues to do so to this day.

Amanda will be the first to admit that she had an easy childhood. Schoolwork was rarely difficult for her, from Primary Schooling all the way through High School. Both of her parents and several of her aunts were academics, and if she struggled at all, she had a very close support group of highly skilled professors to assist her. She discovered early in her childhood that she had a fondness for ‘tinkering’ with and fixing things. She was by no means an engineering prodigy, but she was quickly able to solve the various technical problems in front of her, and constantly learned to improve upon this ability on her own.

Upon graduating High School, she was accepted to Starfleet Academy with a formal recommendation of one of her instructors as well as a formal recommendation of a close family friend who was a low ranking member of SCE. It became blatantly obvious from day one what her career path would be, and from the moment she declared her major and minor fields of study, she never wavered once. She excelled in all of her theoretical engineering courses, and made passing marks in her practical application courses. Her professors noted early on that without the fundamental operational theory behind why something worked the way it did, she felt crippled and unable to solve the problem. However, when presented with said theory, she would always excel and outshine most of her classmates. She was quick to make friends at the Academy, and still keeps in contact with many of them.

While she didn’t graduate anywhere near top of her class, she was nonetheless considered one of the finest up and coming engineers, and it was obvious that she had her eye on the center seat, as she would not have attended basic command training otherwise. Her Theoretical Transwarp Physics professor noted that she would best be served to be placed on an old, run down starship as her first cruise out of the Academy. This aided the Fleet Staffing Office greatly, as they were perplexed as to where to place her due to her odd major and minor combination.

She was assigned as a Warp Field Specialist and Nacelle Maintenance Officer aboard the venerable USS Rhinemaiden, an Ambassador class ship. Under the watchful gaze of her department head, Lieutenant Barker, she was able to outshine most of the other junior engineering officers due to her willingness to take on any task and ability to ‘mingle’ with her peers well. She would serve aboard the Rhinemaiden for 3 years before being laterally transferred to a new vessel.

With the fundamentals of what was necessary for her career path firmly in place, Amanda transferred to the USS Massachusetts, a Nova class vessel. The Massachusetts was much newer, and therefore much easier to operate than the Rhinemaiden, as much of her systems were automated, and the ship was much smaller with less overall systems to be concerned with. She spent the majority of her first year as a low level warp core engineering officer, and aiding the chief engineer, Lieutenant Hathaway, wherever she could. In 2380, the Executive Officer of the Massachusetts took immediate notice of her on an away team to repair a damaged communication relay. While planetside, the away team came under attack by a small party of Klingons scouting the planet for colonization purposes. Amanda quickly took command of the team of engineers, and was able to harass the Klingon party with enough small arms fire to give the Massachusetts time to provide rescue via shuttlecraft.

Unfortunately, Lieutenant Hathaway was killed in action in this engagement. Amanda was quickly promoted as his replacement. At the time she felt it a bit like a scavenger bird circling the carcass of the dead, but time would not afford her much time to dwell on this, as the Massachusetts was re-deployed into an action zone as a relief vessel. Amanda had been previously promoted to Lieutenant junior grade, but owing to her actions during this deployment, she was promoted once again in 2382 to full Lieutenant. She was able to keep the Massachusetts running at full operational capacity, while pushing the limits of what a Nova class ship is able to do. Her commanding officer at the time (Captain Ipson) noted that with every step she took, she seemed to be able to get people to follow her lead easily. She had a much more relaxed style of command than he preferred, but ultimately each command line officer would be responsible for the culture they wished to create within their team. He was fond of her, but knew that she was meant for something more than keeping a small science ship up and running.

In 2385, Amanda was promoted to LtCdr, and transferred to the USS Ride, a Steamrunner class vessel assigned to the New Bajor sector of the Gamma Quadrant, under Task Force 9. Her vessel was destroyed in a Borg attack, and the survivors became stranded at a massive alien station that has since come to be known as “The Reliquary,” for five years.

After the crew was rescued, Amanda was promoted to the head of the science and technology division of the “Reliquary Exploration Project,” and is considered the knowledge expert and liaison to the rest of the Fleet, when it comes to anything involving the station.