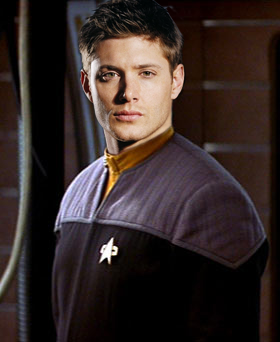 Lieutenant Commander Owen Nash is currently the Executive Officer on board the USS Pandora, exploring the Inconnu Expanse. When Owen joined Starfleet he served on board the USS Maiden, his fathers ship, in the Beta Quadrant before moving on to serve on board several Luna Class Starships that were assigned to explore the Gamma Quadrant after the end of the Dominion War to see how things had progressed in what is seen as a more peaceful region of space. Owen worked in both the Operations and Engineering Divisions. After returning the Beta Quadrant to serve on the USS Adelaide as the Chief of Operations, Owen was re-assigned to Earth to help work as apart of a Think tank to iron out any issues that had arisen with new Luna Class Starships in service in recent years.

Owen was a gifted child at school and graduated in each of his classes with excellent grades. He was a natural at everything having the talent and drive when needed to perform. He left all the schools he went to with honours. Owen’s course was always one set for the stars and he knew that to get there he would have to do his best.

After School and his education, Owen had decided the career he wanted before he was given an option to choose. To join Starfleet. While his mother served on the USS Bandit, His father was Captain on the USS Maiden so Owen went to live with his Uncle Hank in England at his Repair Facility and spent time working there on everything from vehicles to small ships, to small garden implements. After a while of working there and still dreaming of the stars, went on to learn about Starships and Engineering, showing the knack of wanting to know how it worked and if it worked how it could work better. With permission from his father, Owen applied for Starfleet Academy in 2374 and was accepted.

However at the end of his first year he received some very tragic news. His mother was Chief Science Officer on board the USS Bandit and she was one of the many ships that were destroyed or severely damaged in the 2nd battle of the Chin’toka system in 2375. Owen took the toll of his mothers death hard. This now made him more determined than ever to do his best and succeed in becoming a Starfleet Officer and graduating from Starfleet Academy.

Owen performed well at the academy and showed promise early on in his first year, despite the loss of his mother. He also showed his interest in Starship/Starbase Operations and he chose both Operations and Engineering as his courses to pursue. His tutors were impressed by his knowledge and speed of learning when it came to learning about new and current starship classes, how they worked and also how their Engineering and Operations took place. When it came to Owen choosing his path, he was recommended that his talents would be best served on board a starship.

Once Graduating from Starfleet Academy in 2378, Owen was commissioned an Ensign and given the choice of the Fleet, so he picked an Engineering post on board the USS Goliath. He spent two years on board, originally serving as Engineers Mate to the ships Chief Engineering Officer Lieutenant Commander Jonathan Galloway. During his time on board, Owen learnt about Engineering procedures on board whilst the Goliath toured on its Primary mission was to ferry aid to the various planets in the Cardassian Empire after the end of the war.

After the Goliath completed its two year mission Owen was assigned to the Engineering Department on his fathers ship, the USS Maiden, which was on patrol along the Romulan Border, providing material and humanitarian aid to the devastated Romulan Star Empire. During the Borg Invasion of 2381, Owen became a valued member of the crew as the Maiden defended planets in the Romulan Empire from Borg attacks. He was instrumental on several occaisions during the invasion in on board repairs and original thinking towards mechanical issues on board.

Owen transfered to the Operations Department after the Invasion, where he gained more experience and also learnt more about the Sovereign Class of starship itself. His father noticed an urge in Owen that reminded him of his late wife: Owen had passion and drive to step forward and climb the career ladder but he also wanted to explore the stars and learn more about other races and Civilisations as the Maiden returned to charting star systems in the Romulan Empire.

Once the Maiden’s four year mission was completed, Owen received orders from Starfleet Command to transfer to the USS Pandora, one of the new Luna Class Starships being launched. Along with this new assignment Owen was assigned to the Chief Operations Officer position. With this new assignment he became a department head and a member of the ships senior staff under Commodore Merith.

Owen served aboard the Pandora for two years. The ship explored new boundaries and regions of the Gamma Quadrant before the ship was recalled by Starfleet for a refit and extensive study after suffering heavy damage whilst inside the uncharted Mourir Nebula. Captain Merith also commended Owen for his time on board the Pandora as well as his report back to Starfleet Operations using the knowledge he gained from his time on the Pandora to further understand the new Luna Class Starships and further improve the performance of these vessels.

Following this assignment, Owen then moved on to apply to join the USS Adelaide as Chief Operations Officer. He served on board the Intrepid Class starship for two years where the ship and crew explored more regions of the Beta Quadrant as well as patrolling between the Romulan, Klingon, C’Hakilian, and Krazzle Empires. During his time on board, he served alongside another former Pandora crew mate, Lt Cmdr Glyndar, before being re-assigned to Starfleet Operations on Earth and working on a technical group regarding Luna Class Starships.

Whilst serving on Earth, he learned of the USS Pandora being brought back into service and requested re-assignment as the ships Chief Operations Officer

However, en route to his new posting for his second tour aboard the Pandora, Owen was the target of a failed terrorist attack by former Starfleet Officer Andrea Madison. Madison had defected to the Typhon Pact and had rigged the runabout they were travelling onboard to Starbase 375 with a bomb, leaving Owen unconscious before making her escape.

Owen escaped, however he has not given up on finding out why Madison tried to kill him and what other activities she was involved in.