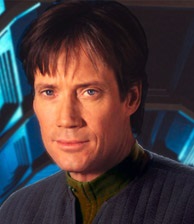 Lieutenant Commander Jack Solomon is currently the Chief Engineer on board Starbase 400. Jack has served there for the past four years since being re-assigned after spending time working for Starfleet Intelligence. Originally Jack entered service as an Ensign aboard the USS Wildcat-A under command of Captain Tomas Wolfe. When that ship was destroyed, he stayed on to serve under Admiral Wolfe on the USS Wildcat-B, rising to the rank of Commander and First Officer. When the USS Wildcat-B was decommissioned, Jack moved over a Chief of Operations on board the USS Essex. This is where he met his friend and current partner Admiral Deela T'Lar. After being re-assigned to Starfleet Intelligence, Jack suffered on several classif missions and is glad to be back in "Normal" Service for Starfleet.

Jack was a gifted child at school and this in no way due to any enhancement’s. He was a natural at everything having the talent and drive when needed to perform. He left all the schools he went to with honours. Jacks course was always one set for the stars and he new that to get there he would have to do his best.

After School and his education, Jack had decided the career he wanted before he was given an option to choose. To join Starfleet, but before he had a chance to get this underway he received some very bad news. His parents were serving Starfleet Officers on board the USS Gage and the Gage was one of 39 ships that were destroyed or severely damaged in the battle of Wolf 359. Whilst his brother and sister coped better with their parents death, Jack as the oldest took the hardest toll of their loss. This now made him more determined than ever to do his best and succeed in getting into Starfleet and go as far as he could.

So Jack went to live with his Uncle Hank in England at his Repair Facility and spent 3 years working there on everything from vehicles to small ships, to small garden implements. After a while of working there and still dreaming of the stars, Jack went on to learn about Starships and Engineering, showing the knack of wanting to know how it worked and if it worked how it could work better. In between his work for his Uncle, Jack also studied spending as an assistant to Dr. Deveraux in his Xeno-Archaeology digs, Jack met Talia, Dr. Deveraux’s Daughter and they fell in love. However while the good doctor searched for Earths Holy Grail, his daughter Talia killed him and set Jack up for the incident. Jack was eventually cleared of the incident and the death of Dr. Deveraux and Talia was arrested for this. Though he survived her attempts to kill him, Jack decided enough was enough. So with permission from his Uncle, Jack applied for Starfleet Academy and got in.

Jack thought he was an only child until his last year at the Academy when he found out that he had a younger brother who is 18 called Ash. For some reason Jack cant figure out, Ash was kept on a Maquis colony as a secret from him until he was 18 and then sent to Jack to be looked after. Ash now lives with their Uncle Hank. His Sister Victoria works in the Starfleet Marine Explorations Corp working to re-populate the waters of Earth and other Federation planets with marine life long extinct.

Academy Background: Jack performed well at the academy and showed promise early on by becoming the third Freshman to win the Academy Marathon in his first year. He also showed his interest in Mechanics and Starship operation had not dulled in anyway and he chose Engineering and Operations as his courses to pursue. He did have a few adventures along the way.

During his time at the Academy he made another enemy in Talia’s Cousin Nyssa Rhodes, who insisted on competing with him to the final hurdle all the way though the academy. When Jack graduated with one Honour more than her, She swore that she would find a way to beat him. Not taking too much notice, Jack hasn’t seen her since graduation day……

Once Graduating from Starfleet Academy, Jack was promoted to an Ensign and given the choice of the Fleet, so he picked the Galaxy Class USS Maiden. He joined the crew taking the position of Engineers Mate For the first year. During the second and third years he spent time in Operations, after the Captain noticed an urge in Jack to drive forward and climb the ladder. Jack was given the opportunity to stay on and become Assistant Chief Operations Officer or to transfer to another ship and his heart yearned for more so he took the position.

After his service on board the Maiden, Jack was approached by Captain Tomas Wolfe regarding the position of Chief Operations Officer on board the refitted Defiant Class Wildcat-A. Jack accepted and spent the next three years on board making some interesting discoveries. The Starfleet ship was the first to encounter a Borg Pyramid and was instrumental in stopping the Pyramid invading a pre-warp civilisation world to assimilation. He found that he worked well with his long serving Asst Chief Tyler Munro and they ran a tight department.

When the Wildcat-A was destroyed during an Invasion by an Alien race called The Fremen, Jack remained with the crew to shakedown the newly built Wildcat Class USS Wildcat-B. During her voyages, they encountered Pirates, Romulan Terrorists, a mass engagement against the Borg, The Ogami and a Klingon/Jem’Hadar Alliance led by his ex-girlfriend Talia Deveraux.

After three years on board, Jack was promoted to Commander and also given the position of XO. A year later Admiral Wolfe took a promotion and The Wildcat Class Starship was later decommissioned assigned to the Utopia Planitia Mothball Yard.

Jack found that Task Force 72 was being disbanded due to organisational changes in the fleet and he began looking for a new post. He was approached by the newly promoted Captain Deela T’Lar on board the USS Essex looking for crew replacements and took the position of Chief Operations Officer. He integrated well with the crew and excelled at running The Operations department again. He also found a firm friend in Deela T’Lar and saw her take a promotion to Admiral.

After two years service on board The Essex, Starfleet Intelligence recruited Jack for a reconnaissance mission against the Borg. He retained his rank of Commander and was placed in command of the Nova Class USS Valkyrie set for a two year mission to observe and not engage the enemy, allowing Starfleet to gain new insight into their enemy. However 18 months into the mission the Borg attacked and destroyed the Valkyrie, taking Jack as a prisoner. He was brought before the Borg Queen and spent several weeks as a prisoner to her. His time under her arrest is not something he speaks of, although he confirmed he was not assimilated and that the Queen took particular interest in him, his vessel and why Starfleet sent him on this mission.

Starfleet rescued Jack after the USS Delilah found him in a crashed landed wreck of a Shuttlecraft from the Valkyrie on Socorro III. Jack spent several months recovering and later being debriefed by Starfleet Intelligence on his encounter, however the Mission, the Investigation and all his logs remain on secure lockdown and its an experience Jack has kept quiet on.

After some downtime recovering from his experience with the Borg, Starfleet Intelligence assigned Jack for an undercover mission on Korriban Prime observing underground Romulan and Cardassian terrorist cells. He was also reunited with the now Lt. Cmdr Tyler Munro at this time. After two years surveillance, Starfleet Intelligence authorised action against the combined movements. However during a raid on a device making facility, he was killed along with three other officers and Jack was recalled, court martialled and demoted to Lieutenant JG.

Jack maintained during his court martial that he found a Section 31 Operative on Korriban Prime who also served on the USS Valkyrie, a woman known as Andrea Milano. Milano was aboard the Valkyrie before the Borg attacked the ship and she was responsible for sabotaging the Korriban Prime mission. Despite this Jack was demoted and returned to active service.

Whilst serving at Starfleet Operations on Earth, he was recommended for the position going of Assistant Chief of Operations on board Starbase 400 and decided to apply

When Starfleet Command orders Admiral Bremer to set up a blockade around Krazzle and C’Hakilian space to attempting to stop outside aid to the Krazzle from the Typhon Pact. Over 700 Federation, Klingon, and Cardassian ships are assigned to the Blockade. The USS Pegasus is Admiral Bremer’s Flagship while Lieutenant Commander Yamaguchi commands the USS Venator. Vice Admiral T’Lar remains aboard SB400, monitoring the Romulan border and ready with a relief force if necessary. Jack is assigned to the USS Venator as Chief Operations Officer.

After this mission and some down time, the USS Essex with Admiral Bremer and Vice Admiral T’Lar aboard, is heading outside Federation space to a newly discovered Class-M world that’s at a tech level about where Earth was during World War II. Jack is assigned to the Essex as Chief Operations Officer, re-uniting him with Vice-Admiral T’Lar. Jack serves on the away team as well during the mission.

Jack receives word from an old enemy who holds vital evidence that proves his innocence after he was incorrectly convicted during his courtmartial. With permission from Admiral Bremer, Jack is assigned to the USS Steadfast to clear his name with Admiral T’Lar ij command. After meeting with Talia and then taken captive by Toral, Son of Duras, Jack is rescued by the USS Steadfast and the evidence is used to clear his name. Immediatley after he is promoted to Lieutenant Commander and assigned to the USS Essex to prevent an incursion by a newly formed Borg Collective.