As a Staff Psychiatrist, Lieutenant (Junior Grade) Elegy Weld serves Starbase Bravo on his psychiatric residency. Having grown up on starships, Starfleet is the only type of life he’s known. One might expect a trained counselor and Starfleet brat to be more proficient at speaking to officers, but this early in his career, imposter syndrome leaves him afraid of most of his patients.

Elegy’s body language borderlines on the stiff and he almost never knows what to do with his hands. At 181 centimetres and 75 kilograms, he has a slim build and long limbs; he’s athletic like a jogger rather than a marathon runner. In this twenties, he can’t gain weight to save his life, despite a healthy appetite — and a degree of vanity motivating him to maintain the physical fitness regime he learned at the academy. He has green eyes that can look right through you and a smile you can feel in the pit of your stomach. He usually keeps his head shaved or buzzcut, and his dark beard is always neatly groomed.  Like most Trill, a unique pattern of dark spots trail his hairline down the side of his face, down his neck, all the way down to his toes. 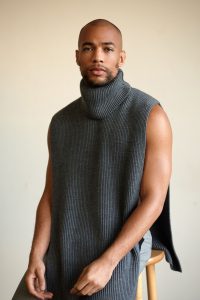 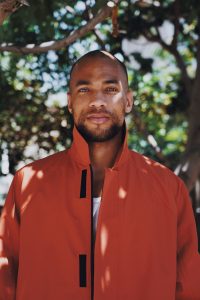 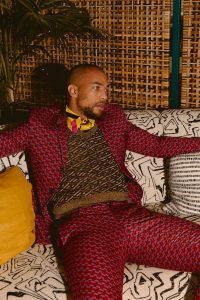 Granted confidence by surviving medical school, Elegy has a curated self-image as a hedonist. Outside of his office, you might spot him savouring a craft cocktail by himself, or gossiping with the nurses, or engaging in misdemeanour-level mischief; anything to delay being left alone with his own thoughts or any distressing emotions. He cares for the people close to him and remains preoccupied with making them want to feel good. Touch is his love language of choice. Elegy possesses deep wells of emotional intelligence and empathy, but he can’t always access them for his own self. The way Elegy sees himself is nonchalant and serene, practically as cool as Vulcan. Nearly anyone else –even strangers– can see that Elegy is fragile. He lives in a constant state of vulnerability, like a raw nerve, all his emotions boiling just hardly beneath the surface.

Elegy is highly sensitive: he can be overwhelmed by the pastries he loves, or the loud music he prefers, or the energy of other people. At times, he desperately craves sensory deprivation after too much exposure to harsh lighting or overlapping noise. At the same time, Elegy’s sensitivity makes him observant to behaviour, micro-expressions, and the figurative elephant in the room that no one is talking about. As a Trill, Elegy is particularly obsessed with the idea of memory, and how it shapes us, and how it changes over time.

Elegy set a common pattern in life at the moment of his birth. He was born a month too early, for his Trill biology, but the Sickbay aboard the USS Thunder Bay kept him safe. His parents, Damhnait and Fortu, had planned an informal wedding ceremony for later that month. Fortu still makes the same joke that he said on that day: Elegy wanted to attend the wedding. Elegy’s parents had never believed in traditional things like marriage, but surviving the Dominion War would change them all. Damhnait didn’t take much of a maternity leave. She was assigned to the USS Thunder Bay as a security officer. Fortu was a painter, working on his Masters of Fine Arts when he wasn’t serving drinks in the mess hall. Elegy’s sister, Imogen, was much older than him, often doting over Elegy more like a mother than Damhnait herself.

In the shadow of the end of Dominion War, there was a common sense of elation around the Thunder Bay. Elegy had many new freedoms, like roller blading through Jeffries tubes. When he class clowned through school, the teachers never stopped him. They’d all survived the Dominion; everyone needed a laugh. Elegy’s grades were good enough; his parents put little academic pressure on him. His elder sister was “the smart one”. Elegy performed with the local theatre troupe and he programmed holonovels with his friends. His parents assumed he would follow in his father’s footsteps.

Growing up on a few starships, Elegy knew great heights of constant insecurity and yet constant invulnerability. To his recollection, the ship was on the brink of destruction every other week, between spatial anomalies, novel plagues, the evacuation of Romulus, or that one time they encountered an asteroid that claimed to be a god. Elegy had his first kiss while the crew was trapped in a time loop; his first kiss with Samuel became his fiftieth kiss. Fortu’s only inklings that Elegy might follow in his mother’s footsteps was Elegy’s occasional hero worship of the Captain, and the increasing number of Starfleet officers in his holonovels. By the time Elegy applied to Starfleet Academy, and then the time Starfleet Academy actually accepted Elegy, it was simply the only life he knew

Majoring in Systems Science upon his arrival at Starfleet Academy on Earth, Elegy supposed he would serve Starfleet as an Operations Officer. On other days, he thought he might look better in teal. His curiosity led him in equidistant directions between the delicate operation of computer systems, the cultural systems that people create, the ecological systems that evolve upon planets, and the solar systems in which they all existed.

Elegy’s internal debate became moot in his second year at Starfleet Academy. There was a brief moment — perhaps a long weekend at most — where discussions were held about if Elegy would graduate into a third year at the academy at all. Elegy’s grades were sub-par; his focus was shattered like a kaleidoscope. Over a period of six months, Elegy’s parents had divorced, his sister had been rejected by the Symbiosis Commission only months before her scheduled joining from a symbiont, and his first Academy boyfriend had dumped him. Worse, his mother, Damhnait, was charged with dereliction of duty, and was eventually convicted and sentenced accordingly. It wasn’t only Elegy’s focus that was shattered; his entire self-image was shattered without his family waiting for him back home. Damhnait’s mercurial ways were all Elegy had known of his mother’s love; however, her crewmates could recognize a part of her had never returned from the Dominion War.

Unsurprisingly, Elegy’s focus had crystallised into a study of behaviour. His electives had become increasingly packed with psychology classes, and he was excelling in those classes, even when his LCARS studies had been floundering. It wasn’t simply the misfortunes of his family he strove to understand, the holonovels he’d written in his youth had always featured deeply introspective characters. By his third year, Elegy transferred to Starfleet Academy – Mellstoxx III to begin an intensive focus on counseling.

Burned by his flirtation with expulsion, Elegy classical over-corrected when he commenced studies for his medical doctorate at Starfleet Medical Academy. He packed away childish things like writing holonovels and valuing punchlines as greater than oxygen. Rather, Elegy was prone to small friend-groups of extreme loyalty. He bonded quickly with one or two friend platonically, and one or two friend romantically, and poured all of his social energies into them. He began practicing at living a double-life between the professional, if fragile, counselor and the messy friend who needs a couple of drinks to blur the harsher edges of unwelcome thoughts and feelings.

As he began to practice counseling, Elegy wasn’t at the top of the class when it came to… actually literally talking to patients. Noting his observational and methodological skills, Elegy’s professors noted he had the makings of an exceptional diagnostician. Conversely, Elegy didn’t immediately learn how to build rapport with a wide variety of patients. He could connect with patients who were like himself, but he would become combative with patients he believed were lying; he would withdraw from patients he believed were judging him. Still, Elegy never shied away from experiences. He committed to his studies with the goal of becoming a psychiatrist.

Without completely finishing his medical doctorate, Elegy was assigned to Starbase Bravo to give him the patient face-time practice that would catch him up to his academic abilities. Absolutely abruptly, Elegy broke up with his boyfriend of two years, Cristobal, to avoid the stress of a long-distance relationship. Unbound and untethered, Elegy launched into his assignment to Starbase Bravo to graduate from his doctorate and to begin his psychiatric residency as a counselor.

Elegy’s arrival at Starbase Bravo was a crash landing.  His transport runabout was damaged by a massive ion storm —The Century Storm— and his leg was mangled in the process.  Elegy’s introduction to the hospital staff was as a patient and, with their treatment, Ensign Weld was able to assume his post as counselor.  While Elegy had expected to be treating broken hearted Starfleet ensigns and lieutenants with egos the size of planetoids, the destructive effects of the Century Storm brought survivors from all over the Paulson Nebula to Starbase Bravo for refuge.  Weld provided emergency medical assistance to survivors stranded in escape pods, psychiatric assistance to patients living with grief and other neurological illnesses, and shared his expertise with an anthropological study of Federation emergency management policies aboard the Raven-class USS Nestus.

By the time ion storms had passed, Elegy’s medical school examination grades had been finalized, and he was promoted to Lieutenant (Junior Grade) and Staff Psychiatrist.