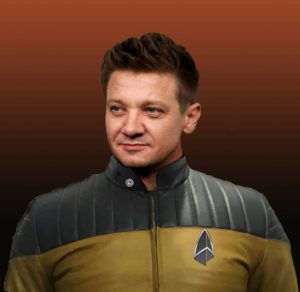 Brian David Colt II (Colt)  born 2371 on Earth in the old city of Boston, Massachusetts. The son of Brain David Colt I and Elizabeth (Telvaris).  His father, a Starfleet liaison who was  killed during the latter half of the Dominon War.

After his father’s death, his mother relocated to a small community on the outskirts of Boston to be closer to her parents.  John and Melanie Telvaris helped raise the young boy. His father had claimed a family history that connected to Samulel Colt, the inventor of Colt Revolver.

Sometime prior to 2385, Colt’s mother took him on a trip to visit a cousin who was serving on ship in  Starfleet. The ship was docked at Mckinley station, giving Colt the opportunity to tour the ship. He was amazed by the technology, and this sparked an interest that would remain.

Young Colt spent time tinkering with anything he could get his hands on. Once he took the family  replicator apart but couldn’t make it work when he reassembled it.  When a technician came to repair it, Colt closely watched and asked numerous questions. He learned that having the right tools was essential to repairing and replacing components. He became a collector of tools, both old and new.

In 2388, at the age of 17, Colt attempted to gain entrance to Starlfeet Academy.  Over the next three years, his tried and failed to pass the entrance exam. A recruiter took note of his engineering skills and informed him that he did not need to enter the academy to join Starfleet.  Just a few months before his 21st birthday, Colt enlisted as a crewman, where he attended Engineering School. It was during this time that he threw himself into his studies.

After completing the course, he was stationed at Deep Space 13, dubbed lucky 13.

When a Vulcan vessel docked at the station, Colt was on the team assigned to conduct repairs in engineering. At the end of the day , the task was not completed, so Colt spend the night testing and repairing a small component connecting the warp core assembly the resonator coil. This small repair increased efficiency by eight percent and saved the morning team five hours of repair time.

He was noted as being an efficient and energetic technician. Colt gained most of his engineering skills by  working with others.

He encountered many different types of ships from all over the quadrant. His hobby of collecting tools has gained him a wide assortment of diagnostic tools and techniques.

In 2396 he transferred to the USS Achilles. The ship was having difficulty keeping its shields up and while the attempting repairs, they fell under attack. During the battle,   Colt was sent to track down the cause and while crawling through a Jefferies tube became trapped when the ship took several hits. He suffered second degree burns when an EPS conduit blew out. Despite being severely injured, he completed repairs allowing the shields to re-engage shields.

Colt enlisted in Starfleet to become an engineer. He has continued to be dedicated to learning and putting his life on the line to save others.