Born on Trill in the capital city of Mak’ala. Her mother, Lorna was a successful political figured and was joined. Her father, Clarus died when she was very young. When Joanna was six years old, her mother married Saban Val, who was also joined. When her half-sister Vanessa was born, Joanna feel neglected and alone most of  the time. She found her escape in books and study and would often retreat to the confines of her room.  She longed to run away and eventually  do so by joining Starfleet.

Joanna, despite being young was a brilliant and studious. When given the opportunity, she easily passed the entrance exams for Starfleet Academy. From the moment she stepped foot onto the campus she felt like she belonged. Her reclusive nature and passion for learning kept her marks in the top of her class, but cut off from other cadets. A number of instructors noted that she would need to embrace a team concept to succeed in Starfleet.

Her roommate invited her on a field trip and refused to take “No” for an answer. Joanna reluctantly went and met their pilot, Cadet Edward Clark. He was older and strikingly handsome. When Joanna looked into his eyes, she felt feelings begin to stir she never felt before. She sat in the co-pilot’s seat, and they talked the entire trip. His calm and friendly personality put her at ease and by the end of the semester they were inseparable.

The more time they spent together, Joanna found it more and more difficult to focus on classwork and her grades began to slip. During a romantic ski trip with Clark she fell and hit a tree, resulting in a compound fracture of the tibia. He tended her wounds and rusher her to a medical facility. After being treated, the doctors suggested she take a week off of her courses to allow for additional healing. Clark found a way to stay with her for that week to help her recover.  After that week,  she could not focus on schoolwork.

While examining subatomic particles, she failed to correctly calibrate a stasis field. The lapse in judgement resulted in a small explosion that caused a campus wide power outage.  She was also placed on academic probation, due to her poor grades. Joanna decided to end her relationship with Clark.  After going their separate ways, she buried her feelings by devoting herself to her studies.

By the start of the next semester four weeks later, she requested and was granted a transfer to the Psi Epsilon III campus. There she remained focused on science and took additional course work.  By the latter half of 2384, her grades put her in the top percentile of her class.

During winter break she returned to Trill and took a short leave of absence from the academy. After her leave, she returned and completed all her additional training and course work and in 2385 she graduated with a double major  Astrophysics & Chemistry.

Her first assignment was Starbase 257, she would study ways to protect against Thermionic radiation.

In 2387, Joanna transferred to the USS Europa when she learned the ship would be on a five-year mission in the Beta Quadrant. In the early part of 2392, she was assigned Starbase 173, where she and other scientists are studying the effects of the Romulan supernova on the sector.

By 2395 she appeared on Starbase 260 and was assigned the lead of a classified project. 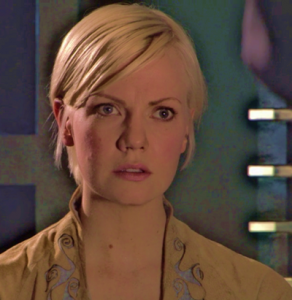 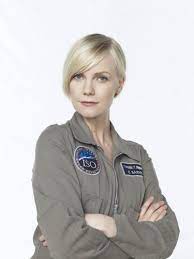 Un-joined Trill, with a rare eidetic memory. She is a dedicated researcher, but tends to be reclusive. Her striking beauty draws unwanted attention, as she does not recognizing it and she has found socializing to be complicated. Joanna met, befriended and fell hopelessly in love with Eric Clark while they were attended Starfleet Academy. Joanna finds herself distracted from her course work and ends the relationship, breaking her heart in the process. She focuses her career as a scientist.