Astrid was born in the beautiful landscape that is Scotland, which is where her heart will always lie. Astrid’s parents passed away before she was old enough to remember them and was sent to live with her Aunt and Uncle in the Scottish Highlands. Her Aunt and Uncle were not very strict with her and as she got older she did not obey their rules and did as she pleased. She began to speak what she thought and it caused her issues with people bullying her. 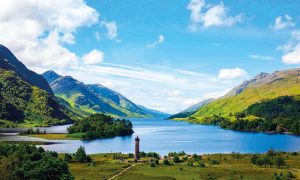 Astrid’s Home In The Highlands

Astrid was tired of the number of problems she was having with others constantly causing her problems. She began to learn how to fight and trained in the art of Krav Maga, which she discovered from a passing civilian in the Highlands. As she trained in the art she began to learn weapons that she could wield and use as well. She became a lover of the Scottish Longsword especially the Skeabost and began to take the task of mastering it. She committed herself to the training and did not stop until around the age of 18. 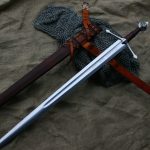 After the time of discipline, it made her realize though she was a hotheaded person and treated everyone like she didn’t care she needed to patch things with the two people that loved and cared for her. She was worried that her Aunt and Uncle’s health was quickly declining. She sat down with them and asked for their forgiveness, which was the point that she realized what love for someone was like. Her Aunt and Uncle had one final request and handed her a PADD showing the recruitment office for Starfleet. She promised that she would join per their request.

Only days after her Aunt and Uncle passed and were buried in the hills as they had requested. Astrid had the honor of playing the bagpipes in their memorial. Astrid had no reason to stay in Scotland anymore and made the decision to contact Starfleet and see what was needed for her to join. After the information was given to her she began to study for the entrance exam and passed the test.

Astrid started the Academy and immediately realized it was not going to be easy her response to people was not the normal human response. She kept to herself except when she needed to be social. She got called to the Academy Commandants’ office multiple times for the way she treated other students, but she said the same thing to the Commandant. Astrid was not social with many people, but the Commandant kept her in the Academy due to her results and hard work. He met with her upon graduation and the last words uttered were “I hope your Commanding Officers are ready for what awaits them.”

Astrid began her career on Earth Spacedock, which was probably the biggest mistake that Starfleet could have made. She began working as an operations officer and did her job efficiently and by the books, but her time outside of that was a wild ride for the officers on the station. She told many people in the Operations Department her thoughts and was none too kind about it. Her time spent working was more than her time off. She continued to do her work and made one or two friends after quite a few rough bumps, but they knew how she was. She continued her work and after a year and a half got a promotion.

She was asked to transfer and help Deep Space 27 in their operations, which she agreed to after a struggle she got a thank you from her CO. She moved to Deep Space 27 after the CO was made aware of her personality. She arrived and immediately had friction with the Chief Engineer of the Station and made him cry on multiple occasions, which caused some issues between the two of them. As always she was told that she needed to shape up and she told the CO the same thing as everyone else. She was who she was and it wasn’t going to change, ironically the Engineer worked better than ever before after his many encounters of berating from Astrid.

Astrid brought results and it was not something that her CO could ever deny and after a lot of discussions, she was promoted to Lieutenant two years later. Astrid continued to work on her many issues, but it did not change who she was and Astrid was never going to change. She was asked to join a Long Sword championship and thought she won the referees would never again want to be at a contest with her. She did make some of them cry as well. She came back to the Station and began to speak her mind even more. She was well known and the people on the Station had begun to like her for who she was after six years on the Station.

She was just getting into a better stride and she was asked to become the XO of the USS Galileo, which she did not understand, but she agreed unhappily. She was promoted to Lieutenant Commander and her first encounter with the CO of the Galileo was not something he would ever forget. Hopefully, the ship wouldn’t fall apart with her as an XO.

Astrid is not like anyone else in Starfleet, in fact, she has a bad reputation with some people in Starfleet because they don't agree with her methods. Astrid is headstrong and speaks her mind. She is blunt and does not care about other's feelings. Though her methods may not seem to be the best they produce results, which is why she is where she is. Astrid is like any other Scottish person she is loud and can hold her alcohol. She challenges anyone to try and outdrink her.