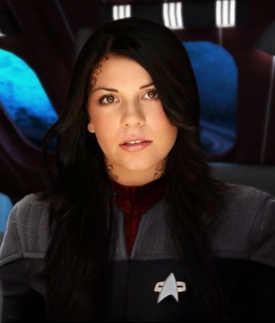 Treylana Hess, or Trey as she's known only to her closest of friends, is a joined Trill that entered Starfleet as soon as she was able to take the entrance exam. She got off to a rather rocky start, having several work related performance issues, but having been called out by her commanding officer prompted her to seek out someone to look up to, someone who had potentially been through the things that she had. Presently Treylana is on leave awaiting the approval of her transfer to the Fourth Fleet Expeditionary Group after the destruction of her most recent assignment, the USS Hiawatha.

Treylana Bauleehn was born July 1st, 2367 (Earth calendar) on the Trill homeworld to Hedron & Gora Bauleehn, a quaint couple dedicated to the sciences; Hedron an astrophysicist and Gora a marine biologist. While Treylana was educated in the sciences just like her parents, she did not share the same passion for the field. From a very young age her passion was for the stars. It all began when she asked her parents for a telescope. She knew there were other worlds to explore and it was her dream to one day visit all of them, even though she knew that was physically impossible.

Thinking it was just a fad they obliged, still hoping that she would one day join the Trill Science Ministry. Unfortunately as Treylana grew older, her passion for the stars grew stronger and when she was old enough she told her parents that she wanted to take the entrance exam and join Starfleet when the time came. Although her mother was disappointed, she gave Treylana her best wishes for success. Her father however was furious and immediately disowned her.

On her fifteenth birthday she expressed her desire to seek the joining. She knew that it would be a long process and that if she was selected, she would have more than enough time to complete her studies at the academy before needing to take a leave of absence for the joining to take place. She asked her mother to take her to the Caves of Mak’ala where she would present her case and take the prerequisite tests to see if she was compatible as a host.

Initially the Symbiosis Commission deemed Treylana an unsuitable candidate even though she had passed every test they had administered. They were about to have her dismissed, but there had been an attack and a young female Trill by the name of Narissa Hess had been murdered. Under extreme pressure to find an immediate host for the dying symbiont, the Commission agreed to make a rare exception and make Treylana the next host of the Hess symbiont, and the youngest recipient in the history of Trill, as the next suitable candidates were days away.

It was not an easy four years in the academy. Being a newly joined Trill, having the knowledge of four lifetimes on top of knowing that her father wanted nothing to do with her all because she wanted to follow her dreams was both heartbreaking and challenging, but she used those feelings as fuel to one day prove to her father that her decision was the right one. Although she did not graduate with honours, she did manage to graduate in the top ten percent of her class. Her grades may not have earned her the commission of her choosing, they were good enough to get her selected to serve aboard the USS Triphane, an Akira class heavy cruiser.

Treylana’s service aboard the Triphane was short lived however. After only a few months she began having performance issues. She was ordered to seek some additional coaching from a fellow crewmate, and while this did not sit well with her, she realized that perhaps a role model was in order. This prompted her to seek out Captain Th’lora Vehl, a fellow Trill and commanding officer of the USS Hiawatha. Vehl was skeptical at first regarding Treylana’s proposal, but after some consideration, agreed to take her under her wing under the condition that she file for a transfer to the Hiawatha.

Her first couple of months aboard the Hiawatha were not easy. She had been assigned as a helmsman and often worked shifts with her Captain, though she did not do so exclusively.

TO DO: Finish history aboard ship

Regrettably, Treylana’s most recent mission to Celes II saw the destruction of her ship when some explosives were smuggled onto the ship while they were there to resupply and assist with a virus that was plaguing the capital city.

Treylana is generally a very outgoing individual when she is with others. She is the type of person who would give someone the shirt off her back to help them out if she could. However, her position does not come with the luxury of a lot of free time, so when she is not on duty she pretty laid back and is often found relaxing with a book of some kind ranging from literature to training manuals and technical schematics or she is in the gyms and holodecks maintaining her figure. On duty she is a person that favors structure and order but only to the point of being efficient. She will never push anyone to their breaking point to get a job done, but will ecourage extra effort if she sees the potential in someone.

Standing five feet eight inches tall and weighing one-hundred fourty-five pounds, Treylana is pretty average in size. She exercises daily and therefore has a very athletic figure which allows her to indulge in her favorite dessert chocolate mousse. Personal hygiene is of the utmost importance to her, but that does not mean she enjoys maintaining the long dark brown locks that match her eyes. She therefore often sports a more windswept look to avoid having to find new ways to put up her hair.