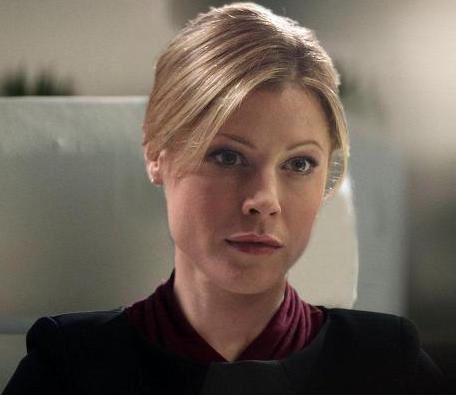 Kara Thrace is a former Commanding Officer of Task Force 93. Born an engineer, she fell into the command path and found she excelled.

Kara was born aboard the USS Endevour. After being aboard the Endevour for five years, Kara’s parents seperated and her father accepted a command aboard the USS Tendruman and her mother continued to serve as the Endevour’s Chief Medical Officer. Kara had a chance in a life time that other kids did not have, and that was interacting with different cultures and species. At the age of fourteen her grandmother was killed during the Klingon Federation War, when her cruiser the USS Mendosa was boarded. After her grandmother’s death Kara’s desire to join Starfleet didn’t falter but it grew to a desire to protect the innocent.

After Kara passed her entrance exam into Starfleet Academy, and also with an endorsement from her mother who eventually became Executive Officer of the Endevour, she entered her first year at Starfleet Academy.

Freshman Year: Kara’s first year at the academy went more smoothly than she planned, due to the fact that one of her friends from the Endevour was one of her roomates. Kara was ahead in her studies, and needed some extra time to clear her mind after a horrible break up with a young 2nd year cadet, so she joined the academy’s racing team. When put in her first race she competed with a Bajoran security officer for twelve laps of the Sol system, and then being declared a winner. The entire racing team managed to win the divisional and reginal titles, before coming in third place in the finals.

Sophmore Year: During this second year she learned that her father had been diagonsted with a critical illness that had a fifty fifty chance of being cureable. Kara slacked off a bit in her studies leaving twice a month to go and visit her father, and she continued training on the starship that her father was stationed at. Eleven months later her father subcommed to his illness and passed away leaving a devistated daughter behind.

Junior Year: Kara blew her first sememster at the academy due to the lost of her father, but she started venting her frustation and depression into racing. This time in the second sememster she managed to pass all her classes and won the academy the championship by beating the new Bolian challenger.

Senior Year: Kara’s last year in school she managed to rise to third in her class, and again led her team to their second racing championship. However his greatest acomplishment was when she came out with her theories on normal time and anti-time. For her theory she was awarded the Engineer’s Certificate Award, and commissioned as ensign.

After graduation Kara was assigned to the USS Santa Anna as a propulsion specialist to the alpha shift. Two days after the crew replacements arrived the Santa Anna was transferred to the twenty first fleet near Cardassian Space. The first battle that the Santa Anna participated in was the battle of Ventrix V, and other series of offensives and defenses. It was during the final battle along the Cardassian front that the Santa Anna received heavy damaged, killing a third of the crew including the Chief Engineer. Because of (then) Ensign Anderson’s hard work and discipline under fire she was promoted to Assistant Chief Engineer, and took command of all repair functions on the Santa Anna and managed it’s beta shift.

After tension along the Cardassian front eased up, the Santa Anna and 101st tactical wing was transferred to the Bolian sector, where the majority of the fighting took place. For three months straight the Santa Anna was involved in eight different engagements, and the last two were in retaking a old starfleet medical colony. Once the Colony was taken the newly promoted Lieutenant Anderson was charged with repairing the colony’s defences, but during the upgrading a Breen fleet attacked, and managed to land troops on the planet. It was during this fight, that Lieutenant Anderson was gravely wounded, nearly losing her arm, Starfleet gave up on establishing the medical base and pulled out completely and re-establish it’s front lines. Lieutenant Anderson bone in her lower arm was replaced with a steel rod, and after three months of rehabilitation she returned back active duty. It was during this re-habilition that she met her future husband – Andrew Thrace.

The Dominion War had broken out by the time Kara returned to active service; Surprisingly she returned to the Santa Anna but now as it’s Chief Engineer, since her last chief was killed during the offensive into the Chintoka system. Now a Chief Engineer, she maximized the crewmembers she had, and managed to repair the Santa Anna’s battle damage within two full weeks. The Santa Anna served with distinction during the war, and once the war was over, Lieutenant Anderson was offered a position to serve as Antares Fleet Yards new Construction Manager, but turned it down to work at Starfleets Utopia Planitia on new propulsion and starship design theories. It was later in this year that she married Andrew Thrace becoming Kara Thrace.

For three years Lt.Commander Thrace worked on different propulsion theories at Utopia Planitia, and managed to create a new warp field that allowed starships to travel at their maxium speed for a few hours longer. Also with a new warp core design, the core was able to add aditional power to older starships that were now considered under powered by Starfleet Engineering. In 2379 while at a bar on Mars, that Lieutenant Thrace was engaged in a bar fight with three Klingon’s and her best friend Lieutenant Danny Simmins that had taken a three month shore leave on Mars to visit Kara. It was during Kara’s leave after the fight that she decided to return to Starship duty and was assigned as a Chief Engineer aboard the USS Detroit as a Commander.

The Detroit was stationed along the Romulan border, delivering medical supplies and engineering supplies to outlying Federation outposts and plantary bases. Two years later Commander Thrace was promoted to Detroit’s Executive Officer. With the new propulsion upgrades in place that she created while at Starfleet Engineering at Utopia Planitia, the Detroit was the most upgraded Akira class ship in the area. In 2374, the Detroit received orders to check out a plantar base that was having problems with their communications array, Commander Thrace beamed down with a landing party of 16 engineers to repair the array. Upon entering the base, she noticed that the base had been empty for quite sometime, and she checked the computer data base, and noticed that Starfleet personal hadn’t been stationed their for nearly a year.

However a small army of Romulan soldiers attacked the away team, resulting in the lost of ten Starfleet Officers. It was the fact that the Commander discovered a conspiracy within Starfleet Command, and was placed on court-martial charges for the death of the members in her away team. Rather than to expose the conspiracy she was court-martialed and demoted to the rank of Lieutenant Commander and sent off to a penal colony for three weeks.

Six months later at the request of Captain Dickson, she was appointed the Executive Officer of the USS Proteus.

After serving on the USS Proteus for six months; Captain Dickson retired from Starfleet, the entire crew was transferred to the USS Teamon; Where Kara redeemed herself in the face of Starfleet Command and was granted the permission to apply for a promotion back to Commanding Officer.

After five years in command of the USS Teamon, Kara was promoted to Commodore and assigned Command of USS Lemming Tree and a samll Task Group based in Task Force 17exploring the M90 galaxy.

Just 2 weeks prior to the wormhole un-expected closing, Kara was transferred to command Deep Space 6 and become Task Force 93‘s Chief of Staff.

As Task Force Commanding Officer, Kara was instrumental in the re-negotiation of the ‘Treaty of Algeron’ and the re-defining of he Neutral Zone borders. Kara briefly transferred to hold the role of Director of Fourth Fleet Intelligence whilst operating near Cardassian space and Task Force 47 area of operations however, with the immediate breakdown of all Romulan/Federation relations, Kara was re-assigned to Task Force 93 where her primary mission has been protecting the now former Neutral Zone and overseeing construction and operation of Devron Fleet Yards.