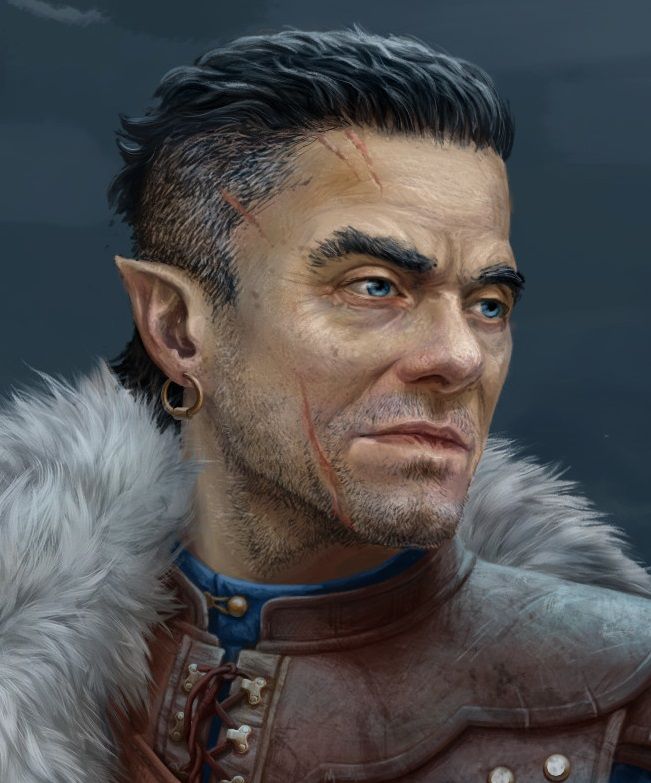 Vakai has human like short spikey hair. He is five foot and eleven inches tall. Average built but quick and strong. He enjoys fishing, bowling, baseball and football. His favorite food is sushi, pizza and tacos. Enjoys going for runs at dawn, to enjoy the sunset and view the stars. His strengths are his foster family, reading, quick learner and motivated. Weaknesses, impatience, insecure, and quiet. Dislikes long, boring conversations, golf, dishonesty and extremely dislikes wasabi. His valuables are a Romulan datapad filled with information, notes, and letters from his biological parents; but also filled with memories with his foster family. An IDIC trinket, reminder that he can do anything, become anything, the choice is his and his alone. Portable Tal Shiar Training VR temple devices.

Vakai is a Romulan Male, who was born on Romulus and secretly brought aboard a Tal Shiar warship by his parents, Detom, his father and Votreel, his mother. His parents had both been Tal Shiar agents for a long time, long enough to know that a lot of the tasks they do, were for the good of the Empire but caused great harm to the Citizens of the Empire, harm that they do not wish their son to endure. So much to say but simple fact is, his parents found a way to sneak him to Earth, leave a note and a few valuable items, where he would be raised by a foster family, learn Earth traditions and become a much different kind of Romulan. Then, when Vakai became of age, learned everything from what his parents left behind, he sent his application to join Starfleet, to make a difference.

His biological parents left him a Romulan Datapad with all of his information such his entire medical check up after he was born, with every detail, his name, his parents, everything, as well as notes, letters, and educational material about the Romulan Empire, Tal Shiar, Tal Shiar’s viewpoint on the Federation, everything. They wanted him to be prepared for the rough road ahead of him.

The IDIC Trinket is an odd thing for his parents to have, but they wanted him to have it, for him to learn of its meaning and to understand that he can do whatever he wanted, and be anything he wanted, the choice was his to make and no one had the right to make that choice for him.

The Tal Shiar Training VR temple devices are something that the Tal Shiar are fond of. As they are said to be, placing them on the temples and activating them puts the user into a dream state, where his eyes closed and everything he sees is completely virtual. But everything the user did, he learned and could use it in the real world. His parents left these to him to learn how to defend himself, how to detect whether he is being spied on or not, and also help him build up a defense against interrogation. His parents feared that the Tal Shiar will quickly find out that he is on Earth and will monitor him, see where he goes…and then try to recruit him for Espionage, either willingly or forcefully.

When Vakai grew up on Earth with his foster family, he grew up wondering why he was there, why he didn’t see other Romulan children and why he was abandoned. Over the years, these questions troubled his mind, and got him into trouble in school a number of times, least up until he reached the age of fourteen. There, his foster parents gave him the Romulan Datapad and left him alone to read, and he read it over the weekend, up to the morning when he had to go to school, and didn’t sleep a wink. All his questions were answered and he wanted to know more, so he kept reading. He quickly learned his species’ own language, and with his questions answered, school was no longer an issue, in fact he started to play football and got really good at it.

Vakai spent most of his life becoming a quarterback for his High School’s team, but as soon as he turned eighteen, more information on the Romulan Datapad unlocked for him, and a hidden compartment of the datapad also opened, revealing two temple nodes. He learned what they were from the new unlocked files, and what his parents warned him about and wanted him to be prepared. So every day after school and practice, he spent the rest of his time with those nodes on his temples, conducting Tal Shiar training. Months after training, he graduated from High School and turned down a scholarship to be a quarterback at one of the best colleges in Northern America; to join Starfleet, in hopes to make a difference, but also in hopes to find his biological parents and tell them that he loved them and thank them for giving him the freedom of choice and to prepare him for the future.

Vakai spent his years at Starfleet Academy until nearly a few months before graduation he was assigned to a Training Vessel for more hands on experience. As the Training Vessel headed for the Klingon Border to broaden those experiences for the Cadets, the vessel was then attacked and captured by a Klingon named Vok. Lieutenant Patterson, Cadet Ryker and Cadet Vakai managed to escape capture, hide their lifesigns and elude the Klingons until they achieved their goal, which led to leaving only five Klingons left on the Bridge, where the three of them retook the ship and got the rest of the crew back from a habitable, which Vok had transported them to. Upon returning back to Starbase Bravo, the Cadets graduated and became full fledged Starfleet Officers.

Vakai and Ryker on the other hand, were given special assignment to the Task Force 93’s Hazard Team, Delta Squad. Their first very mission is to get into The Triangle and infiltrate the Hunters of D’Ghor, gather intel and get out. Upon doing so, they needed a ride and that ride happened to be the USS Vesta itself.

During the Campaign, Vakai Commanded the Delta Squad of a Hazard Team under Task Force 93. Their first mission led them to Meronia III after being dropped off by the USS Vesta. Upon arriving on the planet, Delta Squad’s first task was to eliminate the threat of D’Ghor Raiders that were trying to raid the colony. With training and patience, they were able to eliminate the D’Ghor raiders on the planet and use their transport to locate and land on a planet that had a D’Ghor Camp inside The Triangle. Unfortunately there was no vital information at the camp but Vakai discovered that they had been sending large files to some where outside the system and once they had cleared the camp of D’Ghor Klingons, they took the transport and headed for the destination that the transmissions went to, only to find a D’Ghor Outpost. Once they arrived at the Outpost, they were able to devise a plan to eliminate their ability to use their communication systems, but they were also able to eliminate the Klingons on board, grab the intelligence that they hoped to be important, and steal one of the two D12’s that was docked at the station. They had also rigged the outpost’s reactor to overheat, and overload, causing the station to be completely destroyed, which the team was far away enough in the D12 from the blast.

After the Delta Squad’s efforts in gathering intelligence data from Hunters of D’Ghor’s own computers, the team all received promotions. The Non-Commissioned Officers in the team all rose one rank higher, as well as did Vakai and Ryker.

(Reserved for the results after the Finale)

After Vakai had shown his Command abilities as Leader of the Delta Squad and as acting Captain of the SS Hornet, Vakai was elevated to Lieutenant and made to return to Starbase Bravo for Command School.