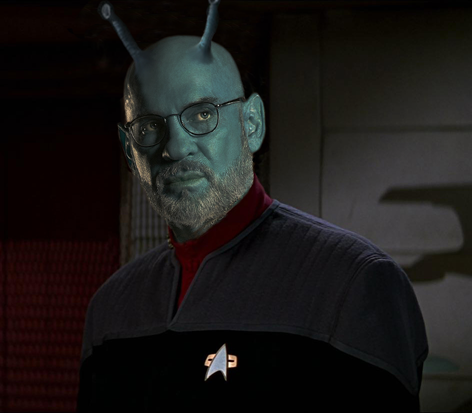 From the discovery of the Gamma Quadrant wormhole, to the fallout from the Hobus Hypernova, a lot has happened during Torden’s time in Starfleet. Still, strategy is life, and he has always sought the best for himself and those around him. Courteous, efficient, Torden is doing all he can to run from that sense of helplessness he felt during the Dominion War. Yet when the lights are out and he’s alone with the hum of the warp core in his quarters, the feeling still haunts the dark corners of his mind. Calculating, calm and gets along well with Vulcans. Can appear cold hearted but there is humour for those close enough to him. Hard on himself. Overly modest, he thinks of himself as a nobody compared to some of the officers he has served with.

Torden’s childhood was peaceful. He and his sister had free run of the family farm on Indarax II. They would never understand whenever their father would explain the complexities of the experimental crops he was trialling. Nor did they have the patience or appreciation for their mother’s artwork. What really fascinated Torden and his sister were the stories of their grandfather. In the evenings before bed, he would tell them stories of worlds beyond imagination. Galactic empires, god-like life forms that could erase you from time, starships and their crews travelling fearlessly into the unknown. Their eyes would brighten, and soon everyone knew that Torden and Gethsenn; two farm kids from Dirfaan, Indarax, would be joining Starfleet.

As the older of the two, Torden was first to attend the Andorian Spacefaring Institute in 2362. His years here were his first time living offworld, and he took to Andoria like an Antedean to water. It was here that Torden got his first taste of holo simulations, specifically those recreating fleet battles from the times of the Andoran Empire. His instructors took note, and before long Torden was battling other students at sea, on land and in space.

One autumnal afternoon, a visiting lecturer from Starfleet Security and Tactical Division had just finished giving a presentation at the institute on 22nd Century fleet rules of engagement. Torden sat attentively in the hall as if it were his own grandfather at the front giving the lecture. Rear Admiral Staunton finished up by eagerly asking the room if any of those present had run a simulation of the Battle of Taurus Reach.

“Now that was a textbook example, 2265, Miranda Class. Outnumbered, outgunned by six Tholian cruisers. They’re coming for Ravanar IV, and you- well, Captain Hallie Gannon and the crew of the USS Bombay, if I remember correctly- are the only thing in their way. So what do you do?”

“Evasive. Regroup at Starbase 47.” A call went up from the audience.

“Ram them!” Came a shout from the class hothead.

“Hah, it’s the 23rd Century, we’re talking about a Watchtower class station. Not the best place to regroup. As for ramming, ugh.”

Torden had raised his hand, having never really been one to make himself the centre of attention. He very nearly reconsidered, too, second guessing himself on the details of Taurus Reach. The Admiral was quick, however.

“Go ahead.” She prompted.

“I’m not sure if I remember the details correctly uhhm, ma’am, but I believe Captain Gannon decided to concentrate naturally occurring metreon particles present in the vicinity to scramble Tholian sensor readings. This left the Bombay, with its more advanced subspace scan capabilities, able to effectively target specific systems on the Tholian ships and destroy two. But the Tholians were still able to cripple the Bombay’s impulse engines, and so Captain Gannon had no choice but to give the self-destruct order. Before they did this though, they caught a third Tholian ship in their tractor beam which was destroyed in the blast.”

“Well remembered.” The tall, auburn haired Admiral looked directly over the podium at Torden. She smiled, and ended the class.

It was fairly clear to all from that point on that Torden was headed for Starfleet. Academically, he excelled, and with a tearful farewell to his family he was on a transport to Earth. It was something else; a melting pot that blew his mind. There were species wandering around on the streets of San Francisco that he hadn’t even heard of. While Andoria was no slouch when it came to diversity, it was still only a moon, and a cold one at that. Earth had it all. Cities, deserts, rainforests, ocean trench observatories. It was severely distracting, and in his freshman year at Starfleet Academy, Torden felt the pressure. The best of Tellar, Rigel, Coridan, Angosia, all convened and duking it out for the best postings on graduation. Following a nod to the department, no doubt given by Admiral Staunton, Torden was streamed to Strategic Operations in his second year. It was another shock to his system. He had always enjoyed simulations, but this was on a whole new level. Every day, weekend, even when he was sure he saw cadets from other departments taking off on leave to see their families, he would be in the simulator. Raktajino fuelled, late into the evening, his classmates would look into his bleary eyes, “Damn, Torden. You need a break.” And so it was that Anbo-Jyutsu came into his life.

It started out as a weekend hobby. He had signed up to the Academy introductory class. It quickly grew into something Torden could use to blow off steam. Operating blind, sensorily deprived, acting on instinct; it was the perfect panacea to everything he had been going through since he had arrived on Earth. The overload and the burnout faded away, as long as he could get himself into the Anbo-Jyutsu ring at the weekends, then twice a week, until he was there almost every evening. He was competing in tournaments, taking time out of class to travel with the team everywhere from Alpha Orionis to Betazed. Unsurprisingly, his scores and class ranking suffered. He didn’t care, he had found a passion that would stay with him for the rest of his life.

On graduation, Torden’s first posting was to the USS G’Mat as a tactical officer. A friendly atmosphere allowed him to develop a great deal of trust in his crewmates as he learned the ropes of starship life. The six year mission was formative for Torden. He observed the Prime Directive in action during an observation mission to document the final days of the Aex-eyr. This pre-warp civilization’s planetary atmosphere had degraded beyond the point of no return due to hyperfocused ionising radiation emitted from a neutron star that was just too close. Three days of mourning followed as the crew was forced to watch as all life on the planet was extinguished.

Not long afterwards, rumours and whispers began to circulate amongst the crew that something terrible was coming down the line. He was soon faced with long simulator hours, something he had not dealt much with since the Academy. It was preparation for something, and it didn’t take long for them to find out what. Federation relations with an extremely powerful Gamma Quadrant species had deteriorated rapidly and, as fate would have it, Torden’s first trip to Risa was abruptly cancelled on the eve of the Dominion’s invasion of the Alpha Quadrant.

He was immediately assigned to Starbase 104 and put to work in strategic planning. There followed many months of little sleep, grim news, and a steady loss of optimism. Personnel passed through, only to return weeks later shattered, bereft, shadows of their former selves. Torden requested reassignment to a ship, anywhere away from paper pushing and the constant analysing of sector sitreps. Naturally, being surrounded on all sides by Starfleet brass, every request was denied. He watched as his superiors worked themselves into the ground modelling logistic operations and assessing combat readiness. He felt unworthy to be working alongside them, and yet Starfleet being Starfleet, he was treated with utter dignity and respect despite his self-perceived lack of usefulness. It almost made the ordeal of the war feel worse.

The tide turned, the war ended. By late 2375, Torden was now a Lieutenant serving aboard the USS Gestalt, again in a tactical position. This tour of duty would send him along the Romulan Neutral Zone, in a state of near constant alert for any Romulan subterfuge or incursion. Despite this, his role felt simple compared to his time in the war. Leisurely, almost. There were few supply constraints, no constant time pressures, and a whole lot of Anbo-Jyutsu matches. It was 2377 when he began attending interfleet tournaments again, reconnecting with some of his old sparring partners from the Academy. More than conveniently for Torden, this posting closer to the Federation “heartland” allowed him a degree of flexibility for travel. He was lucky enough to be involved in the Federation – Romulan series, in which he was soundly defeated by Veltren. Despite his opponent proceeding to win the tournament, Torden still maintains he was the victim of an illegal move.

By 2380, Torden had been reassigned. His new ship, USS ShiKahr, had been dispatched to provide strategic assistance and logistical support for the Starfleet Corps of Engineers. They were beginning work on the Federation transwarp network; a series of conduits that would eventually allow travel between the Alpha and Delta Quadrants with relative ease. The ShiKahr was permanently positioned on the Alpha Quadrant entrance to the network, soon to be named the Union Gateway. Klingon, Romulan and Krazzle intrigue followed, along with disruption of supply chains and proxy conflicts stoked by competing powers with the aim of undermining the construction effort. Aboard the ShiKahr, Torden assisted in countermeasures, attempting as always to stay one step ahead in the strategic game. Attempts at espionage activities would also see Torden working closely with Starfleet intelligence from 2380-85.

2385 saw the ShiKahr’s mission objectives change. The ship was now to coordinate the deployment of a series of listening posts across the Cardassian border. The once broken Cardassian Empire had since begun to regroup, and the Federation was ever watchful. Not long after the listening posts’ activation came the Hobus Supernova, which changed everything.

From 2387-89, Torden was involved with the resettlement of Romulan refugees to suitable colonies in the Beta Quadrant. Assigned to scout vessel USS Mercury, he produced strategic evaluation reports for new colonies founded.

The conflict between the Cardassian Union and the Romulan Star Empire came to an end with the signing of the Gavarian Exploration Agreement in 2390. Torden joined the USS Ganymede, assisting in the resettlement of Cardassian war refugees. His prior work with Romulan colonists in their resettlement efforts enabled him to create a comprehensive alert protocol to be followed by the new settlements. In the event of raids or attack, an encrypted subspace warning signal would be triggered allowing a patrol ship to respond within 48 hours.

Torden was given his first colonial posting in 2395. Permanently based in the Sh’Irath system at the Cratek Pass Logistics facility, he was tasked with overseeing operational efforts and defence activities throughout the sector. Upon joining the station, morale was low amongst Starfleet personnel due to the unforgiving arctic climate. Torden led a large team of Starfleet Engineering and Security personnel, encouraging them to air their grievances and suggest improvements to station routines and facilities. Little by little, a series of gaming tournaments, replicator upgrades and improvements to staff living quarters helped make outpost life a little more liveable for the mostly human crew. This, in particular, caught Starfleet’s attention.

In late 2399, having noted his experience in colonial strategic affairs and infrastructure defence along the Cardassian and Romulan borders, Torden was offered the position of Executive Officer aboard the USS Spartan. Its mission of colonial assistance would be familiar to him, but the threat would not. It was time for Torden to encounter the Breen.