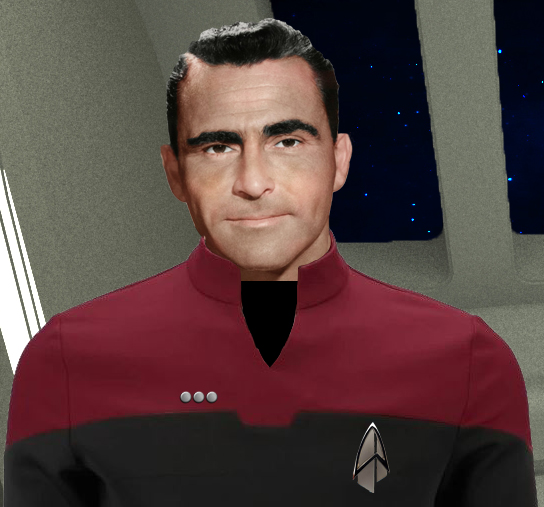 Commander Steve Conrad is the director of the Advanced Starship Design Bureau's Experimental Astronautics and Test Flight Program at Utopia Planitia Fleet Yards. He was previously a flight dynamics professor at Starfleet Academy, where he was in a position to handpick the best young pilots to enter the test flight program upon receiving their commissions as Starfleet ensigns.

Steve Conrad was born on Earth’s North American continent in Houston, Texas. From an early age, he was told about his family’s history of space explorers, dating all the way back to North American astronaut Charles “Pete” Conrad Jr., the third human being to set foot on Earth’s moon. A Conrad served on the backup crew for Col. Shaun Christopher’s mission to Saturn. There was a Conrad in the first-ever Starfleet Academy graduating class and several Conrads served in the Earth Cargo Service. In the second half of the 23rd century, John C. “Jack” Conrad commanded the Oberth-class U.S.S. Darwin/NCC-627 and later commanded the refit Constitution-class U.S.S. Lexington/NCC-1709 and the Excelsior-class U.S.S. Challenger/NCC-2032 before becoming an advisor on the Ambassador-class starship development team.

Steve became enamored with flight, learning how to fly powered and unpowered atmospheric craft. Some of the farmers near where he grew up still fertilized their fields with crop dusters, so Steve spent his summers flying an ion-powered crop duster to earn credits.

But his sights were set beyond Earth’s atmosphere. With the family history of trekking to the stars, Steve was dead set on getting a sponsorship and applying to Starfleet Academy. To his dismay, however, his application was rejected. Although disappointed, he made the best of his time. A well-connected relative arranged for Steve to get some flying time in a Starfleet workbee out at Jupiter Station. He applied again and was accepted, bringing with him the experience he gained in his year off.

Like other Conrads of the past, Steve was sorted into the Academy’s Yeagher Squadron. With the skills he’d honed in the year before arriving at the Academy, he was quickly taken on to the Yeagher Squadron flight team, an unusual distinction for a first-year cadet. By his fourth year, he had become cadet executive officer of Yeagher Squadron and captain of the flight team. Upon graduation in 2381 he was commissioned as an ensign and assigned as a relief flight control officer on the Nova-class U.S.S. Dalton/NCC-73998. When the chief conn officer transferred, Conrad was promoted to lieutenant (j.g.) and took over the position.

The Dalton was a “fun ship to fly,” Steve would often remark. It was small and maneuverable, and as a science and research ship, it was often called upon to navigate challenging obstacles like asteroid fields and planetary rings. Steve relished those opportunities to push the ship to her limits and beyond. His flying had earned him the praise of his commanding officer. It also caught the attention of other starship captains, and to his surprise in 2384 he was transferred to the Nebula-class U.S.S. Ulysses/NCC-66808. He distinguished himself for sixyears on the Ulysses until he received an offer from an old mentor to return to Starfleet Academy and teach flight dynamics. The move would delay his ascendance to a first officer posting and eventually a command of his own, but flight was his first love. It was the reason he joined Starfleet. Along with a promotion to lieutenant commander, Steve took the professorship.

His teaching methods were unorthodox compared to his colleagues in other academic disciplines, though he was merely channeling some of the best qualities of instructors he had. Steve would frequently fly with his cadets on the Saturn Flight Range. His instructional practices caught the attention of Captain Vivian Kramden, an astrophysics professor at the academy. After observing Steve teaching his cadets one day at the Saturn Range, she approached him about the possibility of team teaching flight dynamics and astrophysics in a single class. He initially rejected the idea, with the rationale that one flight instructor was all his cadets needed, but Kramden threatened to pull rank. Grudgingly he accepted the idea, and the two began teaching together the following term.

At first the pairing was rocky. The two would sometimes openly contradict one another. It once got so contentious that they were called to the superintendent’s office and warned to start cooperating or “get the hell out.” They resumed teaching and eventually started finding common ground in their lessons. That led to consultations during office hours, which led to dinners and shows off campus in the evenings. It was a surprise to no one but the two of them when they started dating. Less than a year after they started seeing each other, the got engaged and eloped between terms.

When they returned from their honeymoon, Steve received a visit from Rear Admiral T’Prana of the Advanced Starship Design Bureau. The commanding officer of the Experimental Astronautics and Test Flight Program at Utopia Planitia Fleet Yards had taken a new assignment, and she wanted Steve to be the successor. She surmised that Steve, having taught some of the best flight cadets at the academy would be able bring his skills as a pilot and instructor to boost the quality of the test flight corps. It would, once again, mean he’d delay his plans for a starship command, but this was another prime opportunity that didn’t come to just any officer, and certainly not to one who had failed his first entry to Starfleet Academy. He and Vivian talked it over and agreed that she would finish out the full term at the academy while he set up residence on Mars. He accepted the assignment and was promoted to full commander. Just as Vivian was finishing out the term at the academy, she received an assignment to the ASDB working with Steve and the test pilots.