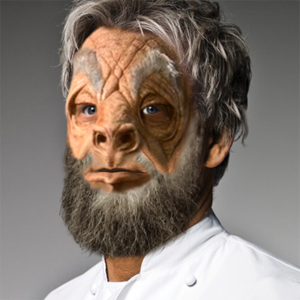 Goron jav Rork was born on November 8th, 2109 in Telemachus on Tellar Prime. He is one of only two children that his mother has ever given birth to. Whilst Tellarite families are usually quite large and involve many little ones, a medical complication prevented Helless from birthing more children. Thus, Goron only has one sister named Yvera.

Becoming a chef wasn’t something that happened overnight for Goron. In fact, it wasn’t even a part of his adulthood very early on. When he was fourteen years of age, he received an invitation to join his city’s mud wrestling team. It was an incredible honour for him that he was even being considered as the sport was one of the biggest on the planet. Not one to pass up on such an opportunity, he accepted and immediately went to the trials. At the tryouts, Goron was able to secure a spot on the team albeit in a substitute role. He didn’t take it as a setback however. He was still very young and had much to learn. He knew that as long as he was persistent and that he worked hard that one day he’d eventually move up and be part of the main roster. That opportunity did eventually come years later, however Goron’s moment of fame did not last very long. Halfway through the first quarter of his first match as a starter, Goron suffered a devastating knee injury. That knee injury ended his career as a professional athlete.

Finding a career after this life-changing incident was very difficult for Goron. He tried his hand at a variety of jobs but none seemed to satisfy his hunger for success. At twenty-seven, Goron had a revelation. Throughout his adulthood, he’d had to sustain himself with food both for his athletic career and every day life. He very much loved eating, as most Tellarites did, and he also enjoyed preparing and cooking that food into something unique and wonderful. It was at this time that Chef Goron jav Rork came to be.

One of the first things Goron did upon coming to terms with the new direction in his life was that he needed more training. In order to be good and perhaps even better than he currently was, not only did he have to learn more about the subject itself but he also needed the experience to back him up. And so to satisfy those needs, Goron went to culinary school and he took on a job at a restaurant.

From that point forward, Goron’s career as a Chef flourished. After completing the culinary program, he started his own restaurant franchise aimed at the athletic population of Tellar. As you can imagine that wasn’t a large portion of the population. To Goron’s astonishment, his food ended up attracting a more diverse demographic than he anticipated. People began to take notice of him and his dramatic personality. They were also very aware of his dedication to making good food which quickly became legendary. Goron’s franchise continues to thrive to this day. That wasn’t enough for him though. Ever wanting to continue to learn and become better at his craft, Goron knew that in order to do so he would have to embrace the cooking of other cultures. In order for him to do that, he was going to have to head out into space.

As one might expect, Goron was granted the Head Chef position aboard the Tellar Star Navy’s flagship, the Eranus. He served aboard her for ten years until her demise during the Second Battle of Altair VI in 2156. Goron was then offered a position aboard the Earth Starfleet vessel Endeavour following the loss of their own chef during the battle. Seeing this as another opportunity to expand his knowledge, and perhaps even his girth, Goron accepted Captain Pearson’s offer and joined Endeavour on its many adventures.