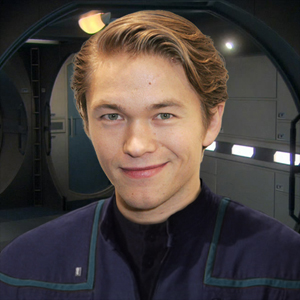 Reidar was born on July 10, 2132 in Trondheim, Norway. He is the eldest child of the family. From a young age, Reidar was very popular. He could become friends with other children very easily by immersing and engaging himself in the activities that they took part in. Educationally, he had an affinity for the languages and public speaking. Reidar always performed well at school, from primary all the way through to upper secondary, but it was a meeting with a young Denobulan girl that changed his life forever.

The girl’s name was Melara. She was about the same age as he. The two of them spent alot of time together and became fast friends. From Reidar’s perspective, he found Denobulan culture and alien cultures as a whole, extremely fascinating. He wanted to learn and experience more. Prior to this, he wouldn’t have even considered joining Starfleet, but it was his desire to meet other people that would come to influence his decision to do so. Aside from signing up on some lowly freighter, Starfleet was the only and best way for him to encounter other cultures. And so, in 2150, Reidar enlisted into the Academy.

While his friendship with Melara was somewhat strained due to the lack of contact they had while he was at the Academy, they still communicated with one another as much as they could. To this day, they still do.

Upon graduating from the Academy, Reidar was assigned to the Daedalus-class starship, the Gunston Hall. He spent two years there, before being reassigned to Endeavour, the last NX-class to be made. For the better part of 2156, Reidar served in a junior officer capacity. That was until the Chief position was vacated prior to the mission at Mu Herculis III. In the absence of a department head, Reidar stepped up and led the team. Captain Pearson quickly took notice of this, and promoted him to Chief Communications Officer.