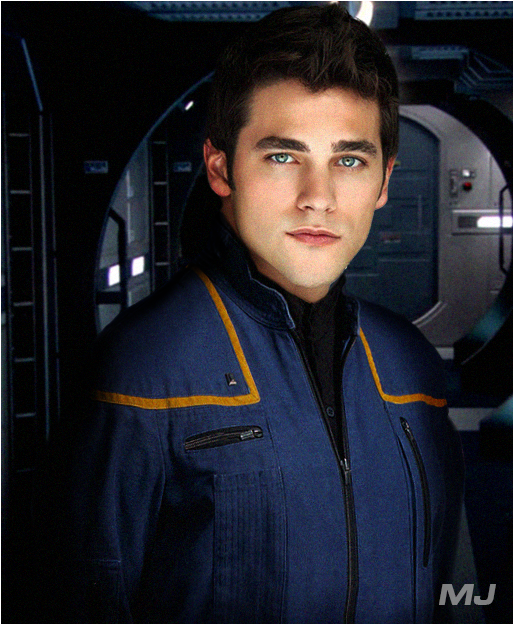 Quiet but likes to be around people. Enjoys a good party, rarely drinks.

Born on August 21, 2131, the third son of Harlen and Mary Randall.
Harlen Randall is one of the systems largest asteroid mining companies, dealing mostly with rare earth minerals and gems. Starfleet has been using the ore he extracts from the asteroids for the hulls on starships. His father had a lot of friends in Starfleet and he had some influence. If his two oldest boys showed an interest, he could have used that influence to get his boys admitted to the academy and get a good posting once they graduated.

His older bothers, Kevin and Porter, are his fathers favorites. When Joshua was born, his father took one look at him and was already disappointed that he didn’t have the build of his older bothers. So upset he was, that he divorced Mary, and remarried a much younger woman. Josh never accepted his fathers new wife.

Josh’s older bothers rarely interacted with him because they were too busy learning the family business, being ready to one day, take over for their father.

Josh’s education was done with private tutors. He received a better education with them, one on one, then he would have in a school setting.

When Josh turned 18, he was ready to go away, far away as possible, to college, when he passed a recruiting center for Starfleet, that wanted younger men and women to join up. Josh walked in spent 3 hours learning all about Starfleet and the opportunities that it offered. At that moment, he decided this was what he wanted, and he put in an application.

He didn’t tell his family about his decision.

Josh listed his family, but never told anyone what line of work his father did. On the application he wrote “Business man”, which was true.

Josh took the entrance exam for Starfleet Training Command and passed. When he arrived at the command complex, he took the standard entrance tests and evaluations. On his appitude test, he showed promise as a helmsman. So he selected that as his major.

Cadet Randall began his life at the complex. He shared a room with a somewhat bold cadet named Kyle Whittaker, who was studying armory. Some how, these total opposites became friends. They would help each other study. Even though they were friends, they were still competitive. They competed over everything: grades, sports and even women. Kyle always won that one..he was handsome so the women just were drawn to him, where as Josh was quiet.

The semesters went quickly. Josh and Kyle always scored in the top 10% of the classes.

By the end of the final semester, they both graduated, Kyle was slightly higher then Josh. After graduation, Kyle married his fiance with Josh as his best man.