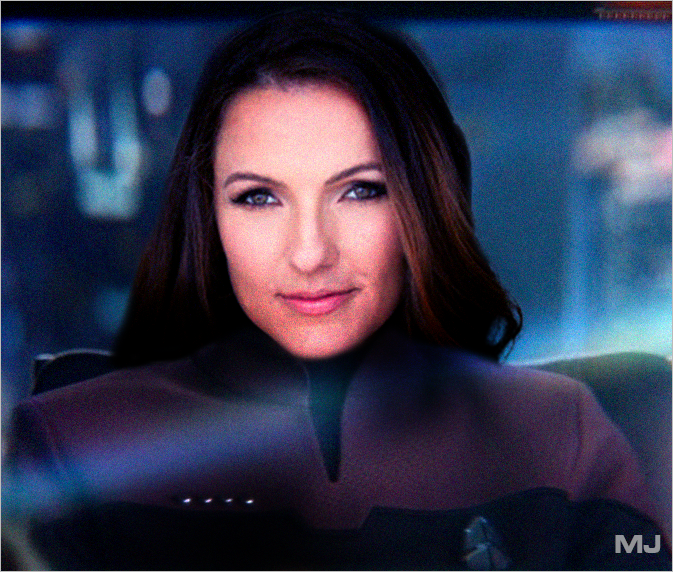 Makayla Adam's currently holds the position of Commanding Officer of the USS Vesta, a Vesta-class Starship assigned to Task Force 93.

Makayla Adams was born in Sydney, Australia on June 1, 2364, to Charles and Tiffany Adams.  She was the youngest of three children, her oldest brother Trevor Adams was ten years older than her, and her older sister Samantha Adams was five years older. Trevor would eventually become the Commanding Officer of USS Mirian an Intrepid-class Starship. While Samantha didn’t join Starfleet but studied medicine and became a doctor at a local hospital.

Makayla was a quiet child growing up, she had a fascination with music and would study and learn how to play the piano. She became rather good at it over the years. Studying was tough as she struggled with some subjects while in school, she would need a tutor for a few years once she reached middle school and high school. She really didn’t make many friends while growing up due to her shyness but, after a while, she managed to make a friend Mira Tobec and they began to study together which made it where she didn’t need a tutor anymore.

She had learned that Mira was going to join the Academy after they graduated high school, Makayla thought about that as she really never gave it much thought. She talked to her parents about it and what they thought, they encouraged her to join. She was good at martial arts, had a back for saving or standing up for others when it was necessary. After deep thought, she decided she was going to join and become a Security/Tactical Officer.

She applied after they graduated high school and was accepted, both Mira and Makayla would be going to whether and ended up having the same major.

The Academy proved to be challenging for Makayla since Mira would also be in the same classes made things a bit easier as they would study together. Most of the time they would spend sleepless nights studying to pass some of the classes. They struggled to pass their first year at the Academy but they managed to pull it off and pass.

Things were starting off good for their second year until Mira had made friends with some questionable people. Which caused some tension between the two friends. Mira started partying, not studying like she normally does, and was failing her classes. Concerned for her friend she tried to confront her about the problem but things ended with a fight and their friendship ended. She continued to struggle, with no one to study with she had to study much harder then she had before.

The rest of the Academy years went by without any major problems, passing all of her classes she eventually graduated about the middle of her class. She learned that Mira had dropped out of the Academy and had disappeared, her first assignment would be Starbase 611 a Jupiter-class Space Station.

Makayla was assigned to Starbase 611 a Jupiter-class Space Station as a Security Officer and at the rank of Ensign, she would spend the next four years working security of the station, nothing major would happen other than a few skirmishes, thefts, and other minor incidents but nothing that was major. She would also meet someone who she would fall in love with but after a year of dating, he had called it quits. This caused her to go into more of a shell when making friends.

She chooses work over making friends as it was easier that way, not to get hurt. Not being able to cope with her ex still being on the station she requested a transfer that would be accepted.

Her next assignment would be the USS Adelaide an Intrepid-class Starship, she would get promoted to the rank of Lieutenant Junior Grade and be assigned as a Security Officer. They were assigned to the Romulan Sector, they had a guest on board a Romulan who was an equivalent to an Ambassador. A security team was assigned to the Ambassador which consisted of herself as well as two other security officers. There was an attempt on the Ambassador’s life while they were in a meeting with the Command Staff.

Makayla was able to jump in the path of the Ambassador saving her life, but she would be severely injured. The other two officers were able to apprehend the assailant and bring him into custody for questioning. Makayla would remain in a coma for a month before she woke up, after being released from sickbay to return to duty she was commended for her quick thinking that saved the Ambassador. She would be promoted to the rank of Lieutenant, and when a position opened up on the USS Ambassador for Assistant Chief Security/Tactical she took it.

Her next assignment would be the USS Ambassador, an Ambassador-class Starship that was assigned to patrol the Klingon/Romulan borders while patrolling the area, they received a distress call from a freighter near the Klingon border that seemed to be under attack. They responded to the distress call only to learn that it was a trap, that rogue Klingons would ambush them and start attacking.

They boarded the vessel, but Makayla and her team were ready as she had a hunch that it might be an ambush by just hearing the distress call, something didn’t seem right about it. Because of her hunch and her quick thinking she was able to subdue the Klingons, while the USS Ambassador would disable the Klingon ship.

Handing them over to their own government to be dealt with, she was promoted to the rank of Lieutenant Commander, a new position opened up on the USS Arondight as Chief Security/Tactical Officer. Her Commanding Officer and Chief both recommended her for the position which she would accept.

Her next assignment the USS Relentless a Defiant-class Starship, patrolling the Cardassian border. There were a few incidents the first year but nothing major, she would during this time take the Command course to further her career. At first, she didn’t want to go past Chief but after some convincing of the Captain, she decided to take the Command Course and pass.

This would actually come in handy as she would be left in charge of the ship while the away team was down on a planet dealing with a situation. While they were down there an unknown ship started to attack, she was able to fight them off with the training she received. During an investigation, it was a pirate ship that was attempting to smuggle from the plant and was surprised to see a Starfleet ship in orbit. They were able to disable the ship and bring the crew into custody.

She eventually became Executive Officer of the Relentless about a year after arriving onboard.

After serving aboard the Relentless and getting passed up for Command, she finally was offered command of one of the larger ships apart of Starfleet. The USS Vesta is the namesake of the Vesta-class, which would be assigned to Task Force 93.