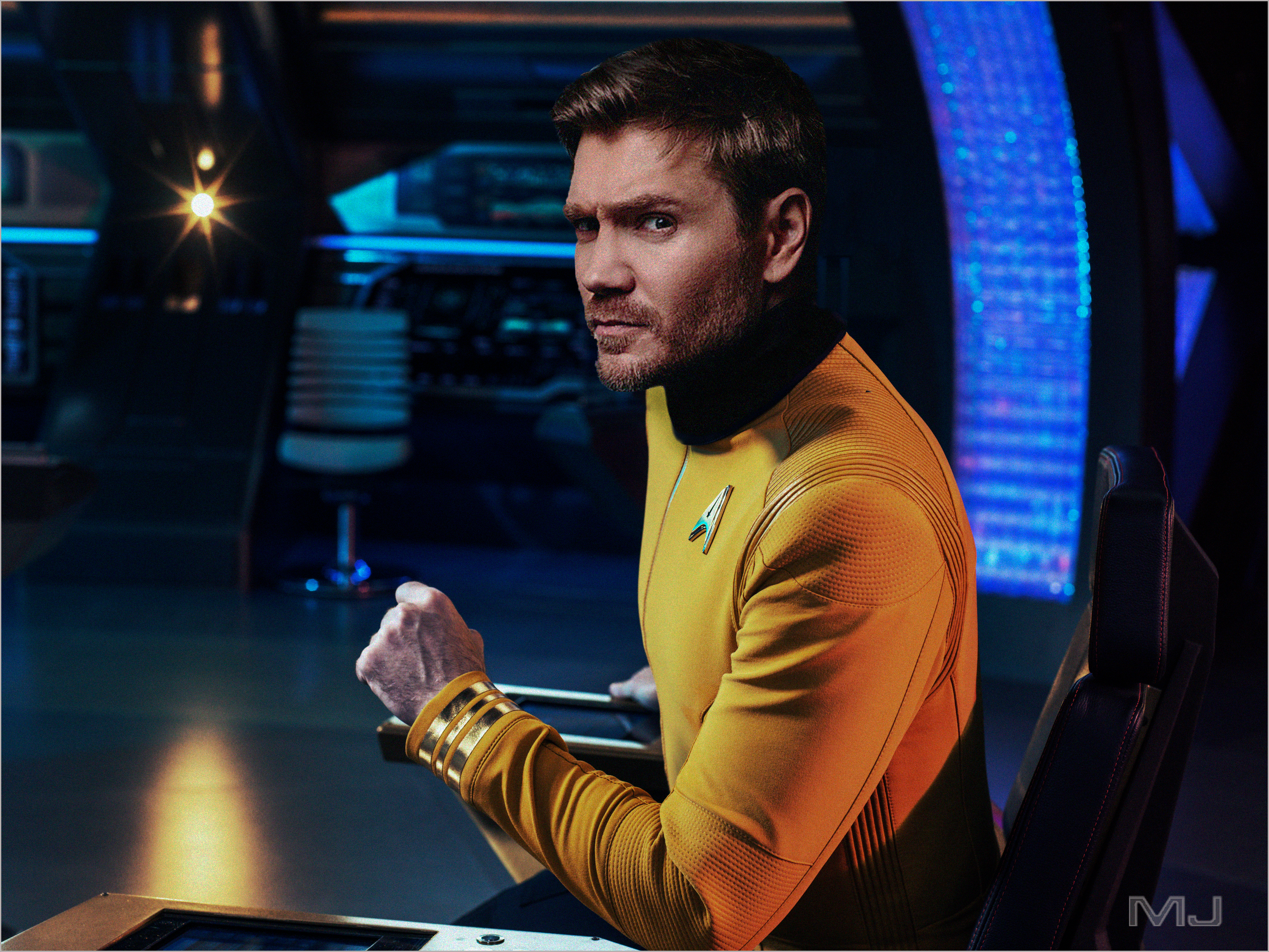 Aaron Ronnie Harris is the current commanding officer of the USS Excalibur (NCC-1664). Originally, he was the first officer and chief engineer of the Excalibur, however during the war his commanding officer was promoted to the admiralty and her parting gift was to give Aaron the ship. A season officer, with a proven track record in being a Starfleet miracle worker, he has proven himself in battle against the Klingons on more than one occasion. The crew of the Excalibur trust Aaron a lot, many of them are loyally blind to him.

As a member of the first generation of children born on Archer IV, Aaron comes from a family that has served Starfleet since the birth of the Federation and beyond. His grandfather, Jamie Harris, originally served with the Earth Starfleet on board the Challenger (NX-03) before going on to command a ship of his own later on. Aaron’s parents were both Starfleet engineers themselves, however decided in their early thirties to leave the service and settle down on Archer IV to have Aaron. Aaron had one brother, Marcus, who is one year younger than him. The two of them were extremely close growing up, sadly though Marcus died during the Federation-Klingon War of 2256-2257.

Growing up on a colony that was quickly developing, Aaron’s childhood was relatively simple and easy going. He wasn’t that popular in school but had a good set of friends around him for most of his informative years. Loving science and spending most days with his parents understanding how things worked intrigued him a lot. Alongside this, he inherited from his parents their passion for space exploration and he became quite the history buff around this topic. He played soccer and rugby during the autumn and winter months, then competed in athletics as well as swimming competitions in the spring and summer months. Winning some medals and trophies, he enjoyed what he did. A number of these he did with Marcus too.

When he was old enough to leave home at eighteen, he was successful in applying to Starfleet Academy. Visiting Earth, for the first time, was an exciting time for him. Aaron loved his time at the academy, again making a good group of solid friends and he did well academically too. He was praised by a number of his instructors and professors. While at the Academy during his third year, his squad was involved in an awful accident which resulted in the deaths of two of his classmates. They had been involved in a training exercise in the asteroid belt of the Sol system, when their shuttle had been hit by a passing comet. As their shields were not raised the impact was horrific and Aaron was forced to ditch the shuttlecraft onto a nearby asteroid after sending the distress call. Once they were rescued by USS Bérrio, a Walker-class ship, the cadets were eventually taken back to the Academy and an investigation was undertaken. For his quick actions in saving the rest of the unit, Aaron was commended however he felt it was an empty award due to the death of his classmates. Eventually after four years of hard work, he graduated with majors in engineering as well as piloting. The latter had surprised his parents, but he was told he was a natural pilot. 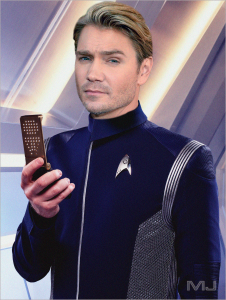 Serving on board the Earhart after graduation, Aaron was assigned as one of the engineers. For the next six years he made his way through the ranks, eventually becoming chief engineer. As the Earhart had been in service for sometime, he became used to systems failing or requiring upgrades. He learnt a lot about finding ways around fixing a range of issues, he appeared to have inherited his parents’ natural engineering instincts. During a mission in The Borderlands, the region of space occupied by the Orion Syndicate, the Earhart was attacked by pirates who attempted to kidnap crewmembers to sell on to slaves. Thankfully, due to his fast reactions during the battle, Aaron was able to create a scrambler field that inhibited them from transporting anyone off the ship. In 2242, the captain made him second officer. This was a new path for Aaron, one he had never considered before. However, he enjoyed the command responsibilities and served for another two years in this spot before he applied to become a first officer.

Moving on to the Kerala would be short lived as Aaron was only on the Shepard­-class ship for two years. Again, he served with distinction and professionalism, becoming quite a strong leader among the crew and getting more used to the command division. The Kerala spent most of its time patrolling the border of the Klingon Empire, rarely did it see any action. When the ship was saving a broken freighter from falling into a gas giant, Aaron developed a tractor beam modulation that allowed for them to cut through a lot of interference. His efforts allowed them to save everyone on the ship as well the freighter itself. Improving the ship’s systems became a pastime hobby that he could not let go, the ship was noted by Starfleet as being the best of its class in service. He took a lot of pride in that achievement. Nevertheless, when the opportunity to be part of a new Constitution­-class ship came up, Aaron was quick to apply and fortunately for him his new captain was a former academy instructor of his.

At the start of 2246, Aaron transferred to the USS Excalibur and joined Captain Cora Dawson as her new first officer and chief engineer. Being a brand-new ship and top of the range, Aaron loved playing with every new system on board compared to the older systems he had become accustomed too. Excalibur’s missions were varied and mixed and during its first five-year mission of exploration it did a lot of good on behalf of the Federation. One of the most noted missions for the young first officer, was when the ship saved an old Kriosian Sovereign Guard battleship that had fled from the Klingon Empire. Aaron led the landing party that boarded the ship and soon found onboard the Crown Prince of the Sovereign Dynasty of Krios Prime. Prince Samious was one among many refugees from Krios that were fleeing from the Klingon’s occupation of their homeworld. Even though the Klingons had already annexed Krios Prime almost a century before, the resistance movement had finally been able to remove elements of their royal family off the world. Everyone board requested political asylum in the Federation, which Captain Dawson agreed to. Prince Samious, who was quite young at the time (almost seventeen in Earth years) required a strong male role model due to the fact that he no longer had any aides to help him. Willing to take on the role, Aaron became an almost older-brother figure to the prince. Eventually they escorted the refugees to a nearby starbase and instead of leaving with his people, Samious requested that he remained on Excalibur. He knew he could never return to his homeworld and the people who he had left with, would now go on to find new lives for themselves within the Federation. Without anyone else he could turn to, Samious asked if he could stay with Aaron and the crew. He was keen to enter Starfleet at some point too. Captain Dawson agreed as long as Harris was happy to take on the role of mentor. Which he agreed to immediately. A fewyears later, Samious left Excalibur to attend Starfleet Academy. Aaron would remain in touch with his former protégé. 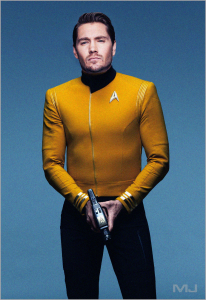 In 2251, Excalibur returned home and was involved in matters a lot closer to Federation space. When war broke out against the Klingon Empire in 2256, Excalibur was one of the ships who was late in assisting the Federation in the Battle of the Binary stars but was involved in rescuing the crews of ships that had been forced to abandon their ships. For most of the year, the Excalibur was assigned to defence duties in and around the space of the former Andorian Empire. At the start of 2257, Captain Dawson was promoted to commodore and given command of Starbase 21. With her promotion, she recommended that Aaron took over from her, which Starfleet Command agreed to. For the rest of the war he led his crew into battle, with each one being a victory one after the other. He was fortunate enough to have his former protégé return to the Excalibur as a member of the engineering department. The captain would take the former prince under his wing and continue to share with him everything he knew alongside this they would play weekly games of three-dimensional chess.

After the end of the war, Excalibur remained closer to home assisting with the rebuilding efforts. When the ship had docked at the Archer shipyards, Aaron’s home world, he found out from his parents that his brother had died during the Klingon’s attack on Starbase 1. While the ship was receiving repairs and some refits, Aaron took some time off to be with his parents and reflect on his brother’s death.

Eventually he returned to duty days before the ship left the Archer system.