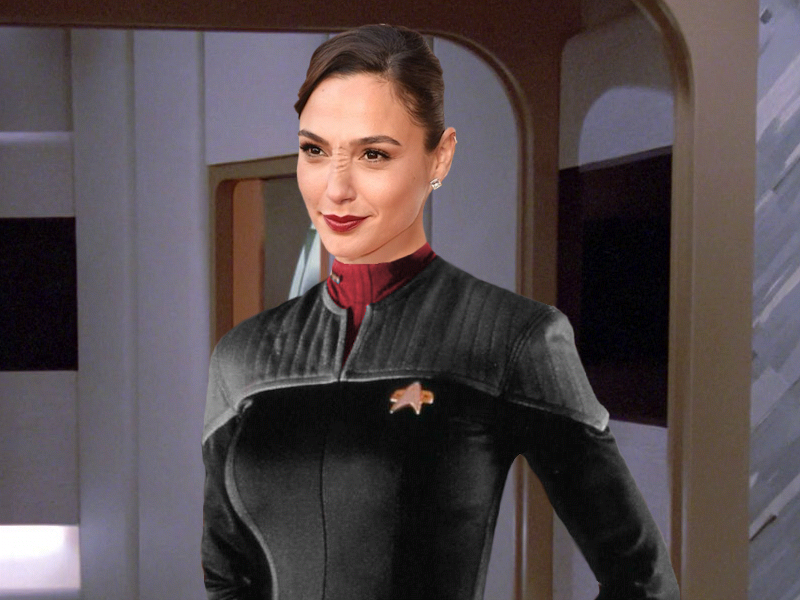 Nushif Ejoma joined Starfleet from the Bajoran Militia in 2385, after the destruction of the Utopia Planitia Fleet Yards. Having excelled at commanding groups of people within the Militia, as well as having a keen ear for language (she knows 5 fluently and is conversant in 3 others), and given her history, she was considered a good fit for a command position within the Gavarian Corridor, dealing with the long-time aggressors of her people, the Cardassians, although at the age of 35, she is rather young to be commanding a vessel.

Ejoma was born and raised in Bajor’s Rakantha province, the only child of two middle-class merchants. Though her extended family was quite large, many of them outside of her immediate family joined the Bajoran faith as Vedeks and Priests.

Ejoma spent most of her youth aboard small Bajoran militia ships, serving as communications and operations officer. She rose quickly through the ranks her first 3 years, promoted from Ensign directly to Captain within that time. Her commander seemed keen on lavishing her with praise and accommodation, and while this made her uncomfortable, she didn’t make waves, and accepted the promotions. She opted to stay with Bajoran local enforcement when Bajor joined the Federation in 2382.

In 2383, Ejoma was given command of a modified Bajoran Lightship (The Rakantha) capable of housing a crew of 10. The Militia commanders tasked her with training new recruits on the basics of astral navigation, command structures, and life aboard a ship. Owing to the loose structure of the Bajoran Militia at the time, she was advanced to the rank of Lieutenant Colonel, as it was the rank at which the militia generally allowed anyone to command a vessel. Ejoma didn’t care about the rank itself, but she did care deeply about the mission. She enjoyed training and enjoyed the rigors of command, though she longed for the ability to travel outside of the greater Bajoran system and to explore.

In 2385, the Utopia Planitia Fleet Yards were destroyed. Ejoma contacted the Starfleet Liaison offices and requested to transfer from the local Bajoran Militia to Starfleet. She was given the rank of Commander (equivalent to her rank within the Militia), and assigned as Executive Officer of the USS Richter, a newly commissioned small science vessel assigned to the Beta Quadrant. As many of the systems on the ship were automated, she found this to be a relatively boring assignment, but was part of many away teams, and enjoyed the ability to see things she never would have in the Militia. She found she worked well with the science teams, and was able to keep the other departmental teams in line with the ship’s overall mission easily.

In 2395, at the young age of 35, Ejoma was offered command of the USS Sagan, a small science ship assigned to the Bajor sector. Having had experience working with scientists in the past, she happily took the command. As of 2399, the Sagan was reassigned to the Gavarian Corridor, and while Ejoma was not exactly elated to have to deal with the Cardassians, she understood the importance of the mission, and is determined to carry it out successfully.