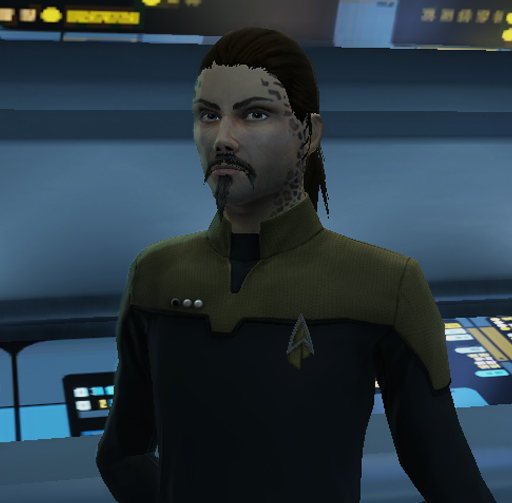 The fourth host of the Vex symbiot, Yanrel serves as the Chief Science Officer aboard the USS Sirona. Though young, he shows a wisdom and composure beyond his years and is notable for his astute nature and proper demeanor. He is exceptionally tall and slender, standing at 6'5" and weighing 160lbs, and appears to keep an upright and proper posture at all times. He is eloquent and speaks with clear and precise diction.

HISTORY OF THE VEX SYMBIONT

In 2238, the 22-year-old Burza Getra was the first to be granted the still-young Vex symbiont, and the first among her people to be entrusted with its care, wellbeing, and cultural and personal development.

Burza herself was a much-disciplined and somewhat militant woman who served with Starfleet during their earliest days of discovery and exploration aboard the USS Helsinki. Being a Trill of strict routine and an admirer of skillful combat and tactical warfare, Burza preferred the company of other, more warlike people such as the Andorians and even went so far as to train with them upon Andoria for a time.

Her time with the Vex symbiont was sadly short-lived, as the joined Trill perished at the age of 29 when the Helsinki was ambushed by a Klingon raiding party. Though Burza survived the initial attack, she died soon after her escape pod was recovered by rescue crews.

The Vex symbiont was quickly rushed back to Trill, where it was granted to its second host.

Many obvious traits of Burza remain with the Vex symbiont and its hosts to this day, most obviously her disciplined mannerisms and proper posture and a general need for routine and organization.

The second and currently longest-living host of the Vex symbiont was Kirvad Ritan, who was joined in 2255 following the death of Burza Vex. Kirvad had already been approved for joining by the Symbiosis Commission and so was prepared for the otherwise overwhelming experience, or so he thought.

When joined with the Vex symbiont, Kirvad’s friends and family noticed immediate changes in the young man. Where he had once held himself with somewhat shrugged shoulders and an almost lazy demeanor, he now stood straight-backed and appeared analytically more aware of his immediate surroundings in what could be described as in a near-paranoid fashion.

He struggled at first with the sudden need for discipline and structure within what had previously been a fairly fluid and ever-changing life.

Despite this though, the man within was not at all lost to the influx of memories and emotions granted to him by his new companion. Indeed, Kirvad’s personality could be said to have been the most impactful and residual upon the Vex symbiont going forward.

Kirvad himself was and always had been a rather thoughtful, wise, and kind young man. He had a warmth and sincerity about him that could not be overstated, and many people came to love and respect him as he carried himself through the years, ever wondering about the wider universe and the impacts each component of it had upon the other.

Curiously though, despite his love for knowledge, exploration, and discovery, Kirvad remains the only Vex host to this day to have never joined Starfleet. Both prior to and after joining with the symbiont, the Trill never had any real desire to serve aboard a starship and was quite content traveling aboard Federation vessels as a civilian.

In particular, Kirvad had a great fascination with the secretive and martial Romulan people. He committed much of his life to the study of their society, military, history, and culture, and was often considered one of the foremost experts on the matter during his day.

Kirvad died peacefully at the age of 84 in his favorite chair in his study on Trill, surrounded by his friends, family, and even his successor, Viba Beltren, whom he had come to call a dear friend in his final years.

Many of Kirvad’s traits and quirks can be seen in the hosts of the Vex symbiont to this day. He was rather well-spoken and exceptionally eloquent with his use of language and he annunciated well, a trait which has noticeably continued with each new host.

Perhaps the most notable factor of Kirvad’s presence in the history of Vex though is his warm, caring, knowledgeable, and sagely demeanor. It is said of both Viba and Yanrel following their joining with the symbiont that they had never been known to be so kind and considerate prior.

With the passing of Kirvad in 2315, the Vex symbiont found itself joining with a dear friend and colleague of its previous host, a promising young scientist by the name of Viba Beltren. Much unlike her personable and esoteric predecessor, Viba had an eye for facts and figures and was known to be a more practical, logical, and academic Trill. Some of her colleagues and friends joked that she was hiding her Vulcan ears behind her hair and that her spots were merely painted on, such was the extent of her direct and learned personality.

When the Vex symbiont joined with her, the changes it brought to her personality, now combined with the memories and attitudes of Burza and Kirvad, were immediately noticeable. She became a warmer individual to be around and was considerably more personable and empathetic. However, her logical mind wad combined now with an almost militant discipline and sense of organization as well as a rampant curiosity and desire for greater learning, lead to her diving deeper and deeper into her work to the point of near-obsession. She would frequently lose sleep ruminating over scientific quandaries and mathematical problems to which there appeared to be no solution.

Though joining did indeed seem to push Viba further and further as a renowned scientist within Starfleet, which she had served in prior to becoming a Vex host, and the Federation as a whole, her fellow crewmen became concerned with her increasingly anti-social behavior, despite her far calmer, eloquent, and understanding personality allaying said concerns. Eventually, though, her Captain ordered the ship’s counselor to begin seeing Viba, fearing that her work obsession was becoming unhealthy and that it may ultimately be a bad experience for her symbiont in the long run as this might be a negative trait that would only continue to worsen over time, a notion that did resonate with the more logical side of the Trill woman.

Eventually, after finally being able to balance her personal, social, and work-life and her studies, with a little help from her regular councilor, Viba rose to become one of the most beloved members of her crew, going so far as to attain the rank of Commander and even becoming her ships first officer once the position and opportunity arose.

Instead of choosing to continue her path in Starfleet however, Viba decided to retire on Earth, where she took up something of a hobby of Kirvads with a great passion, that being horticulture and gardening.

There on Earth, she continued to grow the most wondrous trees, fruits, flowers, and beautifully green groves in and around her home in the rural village of Akaigawa in the Hokkaido prefecture of Japan.

Viba passed away at the age of 90 due to complications from an allergic reaction, after which the Vex symbiont was quickly transported back to Trill for joining with its fourth and current host.

Yanrel Voleg was born in 2364 on the Trill homeworld, the son of Yorid (an author) and Dadri (an art scholar and critic), and the younger brother of Nezra by three years.

Yanrel’s family, nearly all of whom were committed to artistic pursuits, lived in an almost bohemian fashion and were said to be rather liberal in their beliefs, much to the disdain of common Trill society.

Though Yanrel saw the value in his family’s ethical positions and typically agreed with them, he often found his parents and sister to be insufferable as he grew older. For all of their creative genius and deceptively broad intellects, they could often be perceived to be slobbish and a tad too carefree, and Yanrel found a desire in his life to achieve more and to become a man of merit and astute knowledge in opposition to his parent’s creative but impractical pursuits.

Despite initial protest from his parents, Yanrel applied to join Starfleet Academy where he might further his mostly self-educated scientific academia in a more official capacity and apply such knowledge in a career serving aboard a Federation starship, out in uncharted space making the newest scientific discoveries.

JOINING WITH THE VEX SYMBIONT