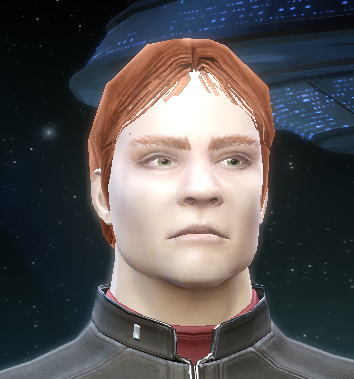 Jonas was born 2355 on Earth. His father was the principal for the Midtown High School. His mother was an accountant for Harold’s Widget Company. From an early age, Jonas was easily bored and sought out activities of an adventurous nature. It was only natural for him to join Starfleet and see the universe.

Jonas’ time at the Academy was actually a lot of fun, he was on the Flight Operations track, so his experience was more the physical than the theoretical. Not everybody was cut out to be a scientist or engineer or technician. When he graduated, he was posted to Outpost Curtis aka Deep Space 20. His tour was uneventful as Deep Space Stations tend to be.

Jonas was promoted to Lieutenant Junior Grade and transferred to the USS Jericho to be the Jericho’s Chief Support Craft Pilot and to gain some bridge time as a Flight Control Officer. While on an away mission, the senior staff became incapacitated. Jonas launched the rescue mission and recovered Captain Drake and his team.

Jonas again found himself promoted to Lieutenant and transferred to the USS Hopkins as the Chief Flight Control Officer. the Hopkins was heavily involved in the resettlement of Romulans after the Hobus Event.

Jonas was promoted to Lieutenant Commander and posted to Deep Space 12 as the Auxillary Vessel Commander. It had become common for Deep Space Stations to have starships assigned to them. Deep Space 12 had a Defiant, the USS Steadfast, and a Nova, the USS Waring, assigned to it. Jonas frequently took them on missions. He found he preferred the Steadfast, but then most of the missions for the Waring were scientific and he really didn’t have an interest in scientific exploration.

In 2399, Jonas was promoted to Commander and given a command for the Osiris Project