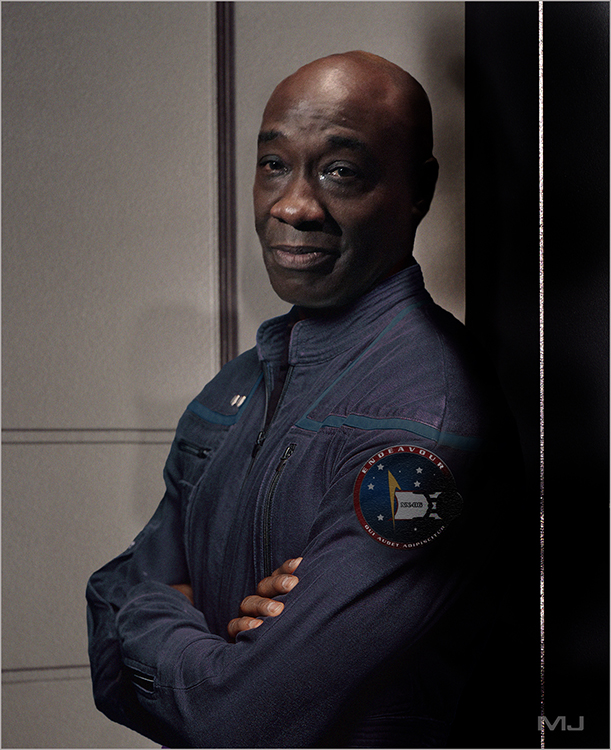 Very tall, dark and all muscle. His gentle nature is hidden behind a very intimidating physique, which he works hard at maintaining. He has no hair on the top of his head due to a genetic abnormality. He also has a very deep, booming voice.

Anyone who knows him knows he is big, burley, and nothing but a soft-hearted and gentle old soul. A gentle giant. Most who knew him in his youth figured he’d go into Security work of some kind, but his talents were scientific, especially when it came to medicine. From an early age, he took to it like a duck to water. After completing medical school on Earth, he did an interspecies internship at the Vulcan Medical Institute. Even for a human, he was regarded well by his peers as an equal.
Strengths & Weaknesses Very well built. Extremely strong thanks to a brusk exercise regimen and bodybuilding. Very intelligent. Gifted in the arts of medicine. A self-starter, he rarely waits for someone to tell him to take action when action is needed.

He can be overconfident in his physical abilities. While he is built like an imposing, towering figure, he is actually meek, almost shy. He can be aggressive when necessary, but normally he is timid, staying away from the spotlight whenever possible.
Ambitions To be the best doctor he can, and to never let a crewmate down when they need him the most.
Hobbies & Interests Working out. He does a lot of physical exercise to keep up his extremely muscular physique. He enjoys spending time with fellow crewmates and especially loves playing chess.