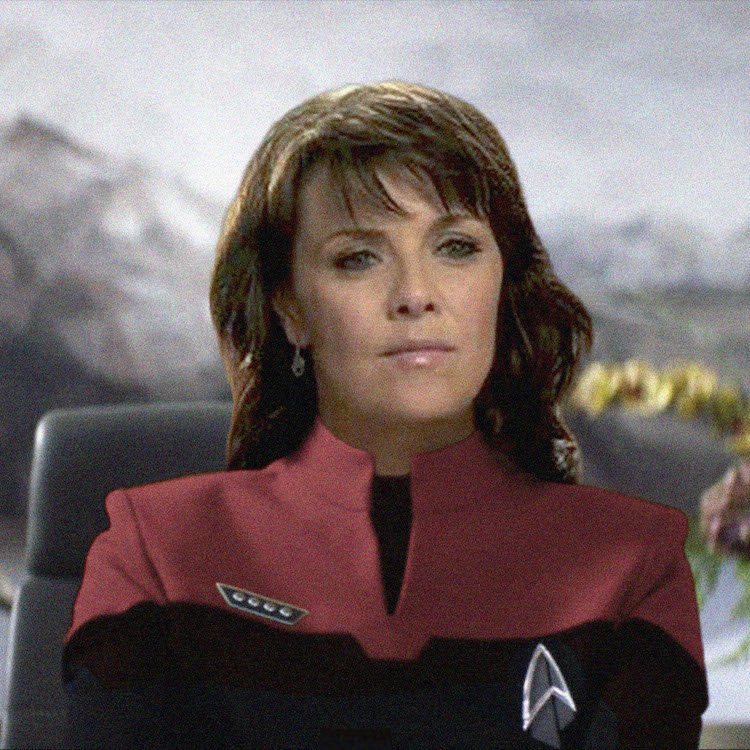 Elizabeth Wolf (born July 18, 2342) is a Federation Starfleet Admiral currently serving as the Deputy Commander of the Fourth Fleet. She previously served as the Director of Starfleet Tactical Command.

Although she is a veteran of the Dominion War, Elizabeth is most prominently known for her work strengthening Starfleet’s defenses in response to the Attack on Mars in 2385. She replaced the incumbent Director of Starfleet Orbital Defenses after the attack and built her career advocating for defense as a tool for peace. In this role, Elizabeth encouraged the use of defensive satellites rather than diverting starships and manpower away from exploration.

Elizabeth has a storied career rooting out corruption in the Fourth Fleet. While serving as Deputy Director of Starfleet Tactical, she joined the Fourth Fleet’s Admiralty in the court martial of a Fleet Commander. More recently, in 2398, she assisted in the investigation and subsequent indictments of Vice Admiral Yewande Banda and Rear Admiral Stanley Morgan for subterfuge and violations of Federation law.

Well liked by officers under her command and respected by her colleagues, Elizabeth championed a “lead-by-example” image while serving as Director of Starfleet Tactical. As a Vice Admiral, she joined border patrols and protected core worlds, earning trust and praise from members of the Federation Council.

Born in a suburb of Charlotte, North Carolina, Elizabeth is the daughter of two Starfleet officers. Although they lived in North Caroline, Elizabeth split her childhood between Charlotte and San Francisco. As a child, Elizabeth enjoyed working with her father, reading schematics and building equipment. Elizabeth earned her spot at Starfleet Academy in 2360 after being recruited for the parrises squares team. In 2364, Elizabeth graduated with from the Academy with a Major in Tactical Operations and Minors in Helm Control and Starship Operations.

Patrick Collins, the Chief Engineer of the USS Icarus, worked closely with Elizabeth, solving everything from Romulan cloak detection to simple phaser malfunctions. Stuck along the border for years, the two found comfort in each other and married on on December 10, 2370. During the Invasion of Cardassia, Patrick was killed preventing a warp core breach that would have destroyed the vessel.

From 2368 to 2373, Elizabeth served on the Excelsior-class USS Harbinger. Although this was not a prestigious assignment for a tactical officer, it allowed Elizabeth to explore the Federation’s core worlds. After only a year on the Harbinger, Elizabeth was promoted to Assistant Chief Tactical Officer.

In 2368, Elizabeth joined the crew of the Saber-class USS Icarus as Chief Tactical Officer. The Icarus patrolled the Romulan-Federation border for several years. During this time, Elizabeth expanded her skillset, earning her Grade 5 piloting license and serving as Officer of the Watch on several rotations a week.

When the Dominion War began in 2373, Elizabeth and the Icarus deployed to the front lines. The Icarus suffered heavy damage and casualties during the Battle of Torros III. While in repair, Starfleet reassigned half of the Icarus’ crew. Elizabeth received a promotion to Second Officer. Once operational, the Icarus once again joined the effort against the Dominion, notably fighting in Operation Return and both Battles of Chin’toka

In 2375, the Icarus joined the Invasion of Cardassia. During the first few minutes of battle, the Icarus faced heavy damage and was forced to withdraw from the front lines. With half the crew dead, including her husband, Elizabeth debated resigning her commission and returning to Earth. Days later, with the signing of the Treaty of Bajor, Elizabeh decided to stay in Starfleet and joined the Fourth Fleet’s Tactical Command. 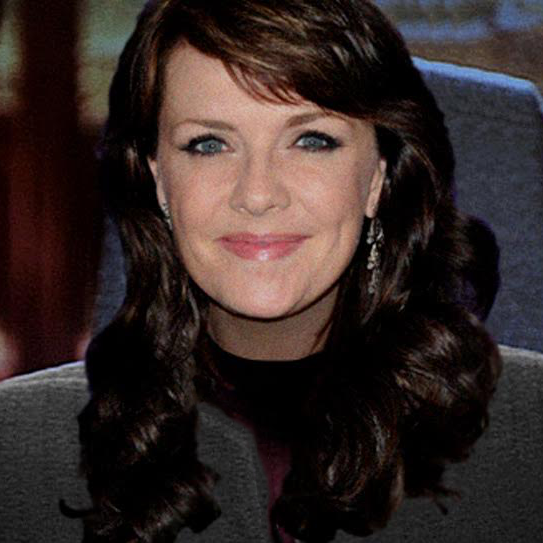 Elizabeth sitting behind her desk at Starbase Bravo (2378).

Elizabeth’s experience during the Dominion War colored her time with the Fourth Fleet’s Tactical Command. As a Command Adjutant, she developed plans to safeguard Bajor by building a network of alert satellites in the Gamma Quadrant. Although her plan was ultimately rejected, the Fourth Fleet increased their presence in the quadrant with a task force of ships.

In 2380, Elizabeth was promoted to Deputy Director of the Fourth Fleet Tactical Command. She used her new position to travel the Federation and assess various tactical operations in-person. She worked with the Fourth Fleet’s Corps of Engineers to build planetary defense grids around key assets, such as Betazed, which had suffered heavy losses during the war.

After the Attack on Mars in 2385, Elizabeth replaced the former Director of Starfleet’s Orbital Defenses. Her work in the Fourth Fleet made her Starfleet’s first choice for the position. Although Starfleet scaled down exploration in favor of defense, the scope of Elizabeth’s new position expanded. Elizabeth favored defense satellites over pure manpower, which freed dozens of ships to return to Starfleet’s mandate of exploration. When Admiral Picard’s resignation brought doubt to Starfleet’s official report on the Attack on Mars, Elizabeth quietly led her own investigation into the incident. Without enough evidence, she abandoned the investigation.

In 2388, Elizabeth was promoted to Deputy Director of Starfleet Tactical. As Deputy Director, she managed the tactical divisions of various fleets. As an Admiral independent of Fleet Leadership, Elizabeth investigated misappropriation of resources in the Fourth Fleet, her former home. Testimony from Admirals Allison Reyes, Anatole Lazarus, and Hars Darax led to the Fourth Fleet Commander’s court martial. The former Fleet Commander, whose name is redacted as part of a plea deal, was convicted of corruption, stripped of his rank, and removed from command.

Elizabeth was selected as the Director of Starfleet Tactical in November of 2388. Although primarily stationed at Starfleet Command on Earth, Elizabeth often commandeered the Prometheus-class USS Athena on tours throughout the Federation. Her goal was to show Starfleet’s strength and support of their allies, while also convincing the rest of the Admiralty that a return to exploration was safe. Her work earned respect from officers in her command, and earned trust with members of the Federation Council. She finally retired in 2394, leaving behind three decades of decorated service to the Federation.

By 2398, the only fleet with assets actively exploring outside Federation space was the Fourth Fleet. The fleet’s command politicized exploration, and Starfleet Intelligence began reporting subterfuge, corruption, and violations of Federation law. Admirals Lauren Archer, Zachary O’Connell, and Paka Larem resigned from their positions to protest the corruption, and an official investigation began.

Once Fleet Admiral Allison Reyes gathered enough evidence, she went public with her findings. Elizabeth joined Admirals Teylas Ramar, Allison Reyes, Anatole Lazarus, and Hars Darax in building the case, using her influence with the Federation Security Council to bring the grievances to public attention. The investigation led to the public indictment of Vice Admiral Yewande Banda and Rear Admiral Stanley Morgan. Their heinous crimes sparked doubt in the future of the fleet. Many Commanding Officers and Flag Offices resigned or transferred to different fleets, and the officers who remained were left to pick up the pieces.

Following a decade of corruption, lies, and court martial cases, the Fourth Fleet restored their mandate of peaceful exploration. Every ship and officer in the fleet met for a conference called the “Osiris Initiative” at Starbase Bravo. Rear Admiral Alexander Beckett led the conference, hosting gatherings and organizing briefings on current events. The event marked a new chapter for the Fourth Fleet, representing peace, trust, and hope.

As a civilian, Elizabeth spent her time at a ranch in Connecticut. She adopted Rosie, a Golden Retriever, and planned to live out the rest of her life hiking and fishing. Despite retiring from Starfleet, Elizabeth began teaching as a Professor for Starfleet Academy’s Advanced Tactical Training Program in 2394. As a lecturer for Advanced Tactics (ATT 101) and Threat Analysis (ATT 105), every officer in ATT from 2394 to 2398 attended at least one of her lectures.

In 2395, Elizabeth was asked to advise the Federation Council’s Select Committee on Security (known as the Federation Security Council). She used her decades of experience to inform decisions and recommend plans of action. Notable decisions Elizabeth advised includes refreshing Starfleet’s mandate of exploration, revisiting the ban on synthetic life, and continued upgrades to Federation defense networks.

A complete, itemized record of Elizabeth’s service to Starfleet and the Federation, from her time serving as the Fourth Fleet’s Deputy Commander to her initial training at Starfleet Academy. Listed in reverse chronological order.