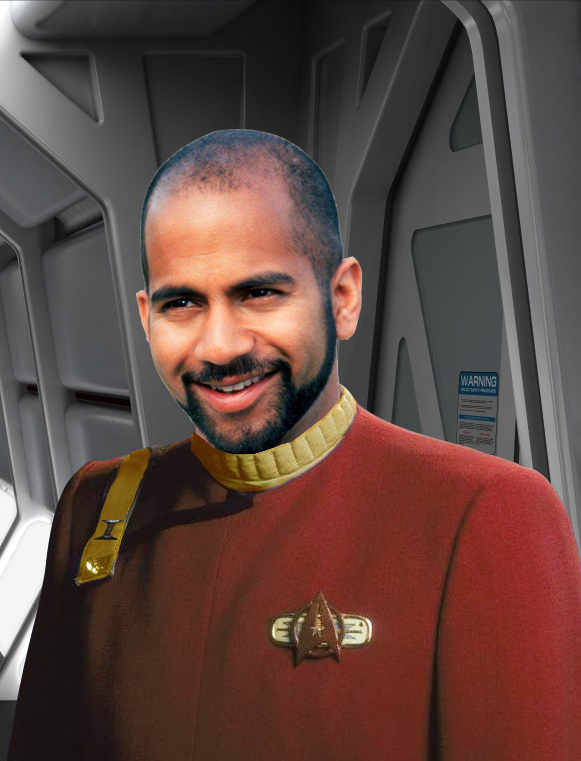 Lieutenant Khaled al Rashid was a Human Starfleet officer in the 23rd century. He was a son of Starfleet Commodore Faisal al Rashid, portmaster of Starbase 21, and a descendant of Haroun al Rashid, an early president of the nascent United Federation of Planets.

Khaled al Rashid hails from the family of Haroun al Rashid, an early president during the infancy of the United Federation of Planets. He is the son of Starfleet Commodore Faisal al Rashid, portmaster of Starbase 21.

It was never in doubt that young Khaled would enter Starfleet. He spent his youth in the deserts of Saudi Arabia on, flying gliders and falling in love with the human obsession with escaping the bonds of Earth’s gravity. His father, who came up through Starfleet as an engineer, often joked that while he put starships together, his son would fly them apart.

In Starfleet Academy, Khaled was recruiting poster perfect. He maintained a fierce rivalry with fellow flight cadet Red Jarvis from Tycho City on Luna colony. Though Khaled never broke Red’s time record on the Academy flight range, he did graduate with honors, while Red’s multiple demerits landed him midrange in class ranking.

Despite Khaled’s family connections, he could not land a posting the the prestigious Advanced Starship Design Bureau’s flight testing team, and was incensed to find that the undisciplined Ensign Red Jarvis had, indeed, snagged a spot on that team.

The disappointment was momentary, though, as he drew the first of a handful of important deep space assignments as a relief helmsman on a series of scouts. He learned many practical, on-the-job lessons, like the importance of developing an almost symbiotic relationship with a starship navigator. 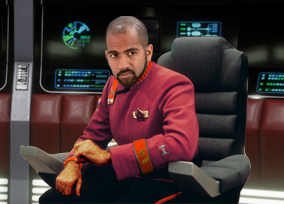 After a series of assignments aboard agile Oberth-class scouts and Constellation-class starships, he was tapped for command training and, upon completion, was reassigned to the Miranda-class starship U.S.S. Minerva.