Beginning his career in the enlisted ranks, Matt Rourke went on to become a security and tactical officer trained in criminology, criminal psychology, and strategic operations. He has made his name as a leader in Starfleet law enforcement, both on small-team investigations and in a command position on starships dedicated to peacekeeping. In this time he has earned a reputation for straightforward bluntness, though his record includes multiple demonstrations of efficient cunning, and he is known for being as likely to talk his way around trouble as to fly straight through it.

Matt Rourke grew up the son of the CEO of an interstellar mining corporation and a Starfleet Intelligence officer. Due to his mother’s work with her company taking her to business matters across the Federation, Matt and his younger sister, Sarah, grew up primarily under the care of their father. Commander Joshua Rourke’s career had stalled since his marriage, landing him at a desk on Earth; between his own failings and feeling trapped by his family, this instilled a great bitterness in him that would reflect back on his own children.

With their mother away, Matt found himself often the subject of his father’s ire and needing to protect his sister. Despite this he was successful in school, throwing himself into challenges away from home – he enjoyed good marks, was popular, a successful sportsman. While his relationship with his father was negative, he still grew up in a Starfleet family and not only dreamt of making his own way within the organisation, but saw it as a possible escape. His profile as a student made securing an interview for the Academy easy, only for the preceding night to become embroiled in a family row. Distraught and sleep-deprived, Matt accounted for himself so poorly his application was rejected.

Desperate to get away at this point, Matt thus enlisted the moment he finished school. Seizing the first opportunity he found saw him trained as a security officer during the height of the Dominion War, a troubling and traumatising experience for the young man. But he accounted for himself well, demonstrating leadership and initiative, and he caught the attention of the XO of the USS Hood, a Commander Beckett. Well-connected and influential, Beckett encouraged him to reapply for the Academy, and sponsored the effort. The end of the conflict thus saw Rourke at last becoming a cadet.

He was, at this point, an intensely angry young man. The Academy proved a better place for him than a war-embroiled starship, unsurprisingly; instructors and fellow officer candidates noticed his comportment and Rourke finally received the psychological support he needed. Beginning the process of healing after his experiences with the war and the abuses of his father, he took a serious first step by telling the whole truth to his mother, which ultimately ended his parents’ marriage, a process through which Rourke was helped by Academy staff and his friends, particularly medical student Aisha Sadek.

From there, Rourke flourished. Having seen both war and the ugly side of humanity, he turned his focus to becoming an officer who would confront these atrocities rather than ignore or perpetuate them. His studies focused particularly on areas of justice and ethics, and for all his wartime experience and passion for Academy sports, as a cadet he also became engaged in campus politics, writing for the Academy paper. He graduated high in his class with joint honours in Criminology and Strategic Operations with a minor in Political Science, and went on to serve in the security and tactical departments as a junior officer.

His first posting, the USS Discovery, was a diplomatic vessel where he gained experience in VIP management and personal security. He was commended after eighteen months for his role in the foiling of a plan by local dissidents to assassinate a Federation envoy, leading the investigation to flush out the would-be killers without compromising the target’s safety. In 2382, an emergency on the frontier station Starbase 242 saw a need for new personnel after an accident. Despite his limited experience, Rourke jumped at the opportunity to serve as Chief of Security. The station was old and rickety and its place in proximity to Klingon space meant it held limited tactical value, but it was a hotbed for potential smuggling and petty criminal activity. 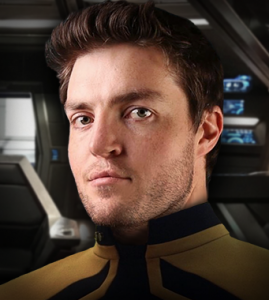 The reputation he earned saw him eventually offered a posting as a team leader in an independent unit of Starfleet Security Investigations Division, travelling the length and breadth of the Alpha and Beta Quadrants, confronting crimes within Starfleet and the criminal underworld of the Federation. During this time he fostered further relations across the borders with the Klingon Empire, and made significant contacts wherever he travelled. It was noted in his record, however, that while he cooperated professionally with Cardassian representatives, he did not develop the same close ties that supported him elsewhere in his work.

He might have stayed had he not been offered a new opportunity by the man who had helped him get his life back on track: Beckett, now a captain, in need of a Security Chief and First Officer. For five years, Rourke served as his XO on the USS Achilles, an assignment focusing primarily on internal and border security, and again his connections across the Alpha and Beta Quadrants grew. When an opportunity came up for advancement, his mentor secured him a prime assignment of his own.

The USS Firebrand was a frigate with a small crew, mandated to act swiftly and efficiently in matters of law enforcement. Running down criminal enterprises or pirates, conducting internal investigations, and with the resources to be self-sufficient for long periods of time rather than based out of a station. Rourke assembled a skilled and talented crew, including his first officer Erik Halvard and senior staffer Elizabeth Lockwood. The Firebrand’s mission ended in tragedy, however; an undercover operation of several of the crew blown by a leak from elsewhere in Starfleet, and Rourke was forced to watch from his bridge as Halvard and Lockwood, among others, were summarily executed by members of a drug smuggling cartel in a transmission before their ship escaped. The perpetrators were eventually brought to justice, but the bodies of the murdered officers were never found.

The experience deeply shook Rourke. Although the subsequent inquiry cleared him of wrongdoing, he still declined the offer of returning to starship command, instead taking an assignment as an instructor at the Academy. Markedly changed from the officer he used to be, it was only with deep reluctance that, two years later, he accepted what was purported to be a temporary assignment as commanding officer of the USS Endeavour.