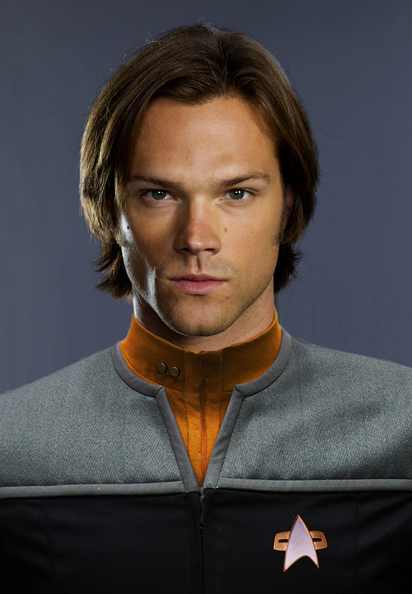 Lieutenant Will Morgan is my Dominion War Era character. With the outbbreak of war in 2373 against the Dominion, Will was assigned to the USS Lexingotn where he served for most of the conflict. The Lexington served in many of the high profile battles during the including Operation Return, The first Chin'toka campaign and the Battle of Cardassia With the Treaty of Bajor declared and peace announced, Starfleet assigned Will to the USS Taniwha as her Chief Operations Officer. With the ship in dry dock and ready to venture out in this new time, Will was looking to adjust from Wartime to Peacetime as well as spending time on a new ship with his Fiance.

Will was a hard-working child at school and graduated in each of his classes with good grades. Due to his time working at his uncle’s repair facility in England, He found that he had a natural talent for fixing, repairing and understanding how machines, speeders and eventually starship systems worked. Due to these talents, Will found a drive to perform when working on technical and mechanical aspects of his education. He left all the various schools he went to with good grades and always felt a level of confidence towards the next school year as well as a small level of nervousness. Due to his family’s involvement in Starfleet, Will’s course was always one set for the stars and he knew that to get there he would have to do his best and continue to work hard.

After School and his education, Will had decided the career he wanted before he was given an option to choose. To join Starfleet. While his parents served on the USS Alabama, Will went to live with his Uncle Hank in England at his Repair Facility and spent time working there on everything from vehicles to small ships, to small garden implements. After a while of working there and still dreaming of the stars, Will went on to learn about Starships and Engineering, showing the knack of wanting to know how it worked and if it worked how it could work better. with permission from his parents, Will applied for Starfleet Academy in 2365 and was accepted.

However, at the end of his first year, he received some very tragic news. His parents were Officers on board the USS Alabama and she was one of 39 ships that were destroyed or severely damaged in the battle of Wolf 359 in 2366. Will took the toll of their loss hard. This now made him more determined than ever to do his best and succeed in becoming a Starfleet Officer and graduating from Starfleet Academy.
Service Record:

Will performed well at the academy and showed promise early on in his first year, despite the loss of his parents. He also showed his interest in Starship/Starbase Operations and he chose both Operations and Engineering as his courses to pursue.

His tutors were impressed by his knowledge and speed of learning when it came to learning about new and current starship classes, how they worked and also how their Engineering and Operations took place. When it came to Will choosing his path, he was recommended that his talents would be best served on board a starship

Whilst at the Academy, Will met Althea during his time in various classes they shared together and they grew close as they spent more and more time together. This helped Will to cope with his mother’s death at Wolf 359 and by the time he and Althea graduated, they had been in a full-time relationship. They went their separate ways as their own Starfleet careers awaited them.

Once Graduating from Starfleet Academy in 2370, Will was assigned to an Operations post on board the Nebula Class USS New York for his first tour out in the fleet. To Will, This decision seemed to be based on his talents and drive he had shown during the Operations and Engineering courses at the Academy.

He spent 2 years on board serving as a deputy to Lieutenant Michael Mason. During his first year, Will learnt about Engineering procedures on board, serving first as Engineers Mate and then as a Warp Engine Specialist whilst the New York toured on patrol in the Badlands. Will was an involved young officer on board as the ship was involved in several skirmishes with Maquis raiders and he often found himself using original solutions to repairs on the starship which gained him recognition. He was promoted to Lieutenant Junior Grade.

During his assignment, he spent time in the Operations Department, during which time his CO noticed an urge in Will to drive forward and climb the career ladder but also to explore the stars and learn more. During the New York tour on patrol in the Bajoran Sector, hostilities broke out between the Federation and the Klingon Empire and the Nebula Class Starship found itself involved in several battles with Klingon Bird of Prey along the Bajoran Border. However, a hard battle with a Vor’cha class battlecruiser left the ship in a bad state.

The New York managed to limp out of the Badlands to DS9 and after repairs, was ordered back to Earth Station McKinley for a refit and upgrade programme. Whilst there, Will was transferred to the USS Madison as part of the Engineering crew that the ship was in need of and it was here that he rekindled his romance with Althea. After 12 months on duty in the Alpha Quadrant, The Madison was called into action at the Battle of Sector 001 when a Borg Cube attacked Earth. During the battle, he employed every imaginative way possible he learned, having to man the Operations position when Lt. Tomar was injured by an exploding console. However, due to the heavy damage sustained on board, the Madison was towed back to Earth Station McKinley for further repairs.

Whilst he was at Earth Station McKinley, war broke out with the Dominion. Will found out about positions available on starships docked at Starbase 375. Once he arrived there it was clear there were ships that needed good crew and Will was assigned to the USS Lexington as Chief Operations Officer.

Working alongside his Assistant Chief Petty Officer Andrea Carter in repairs to the ship after the Borg attack before leaving for Starbase 375, Will was hesitant to working with Carter at first due to her assimilation and rescue from the Borg and this brought back the raw memories of his parent’s death, however they soon learnt to get along and worked well together. Will was happy that Althea had managed to get transferred on board with him during what would be such a dangerous time.

During the War, The Lexington found itself on the front lines taking part in battles such as Operation Return and the first Chin’toka campaign; facing off against the Jem’Hadar and the Cardassians many times. The Lexington also took part in the Battle of Ricktor Prime where she sustained heavy damage whilst in combat with a Jem’Hadar Battlecruiser. With the Lexington re-assigned to Sector 001 for a refit, Will was re-assigned to the USS Dauntless.

The Galaxy Class starship had lost many crewmembers during the Battle of Ricktor Prime by joining the USS Lionheart in the protection of two severely damaged Akira-class starships from an attack by an overwhelming force of Cardassian vessels. After the battle was complete, Will didn’t have long until the Starship was repaired and the joint Federation-Klingon-Romulan Fleet announced that they were making their move on Cardassia for the final engagement.

During the Battle of Cardassia, Will had his hands full on board the Dauntless where whilst taking heavy damage, she provided cover for the flagship and fought off four suicide attacks by Cardassian vessels wanting to take it out. Once the battle was concluded, the Dauntless docked at Deep Space Nine for repairs and it was there Will took some time to understand that the War was over.

With the Treaty of Bajor declared and peace announced, Will decided to take the time to do something that he wanted to do previously. He proposed to Althea during some leave on DS9 and enjoyed some quiet during the new peacetime. Starfleet had other ideas however and Will was assigned to the USS Taniwha as her Chief Operations Officer. With the ship in dry dock and ready to venture out in this new time, Will was looking to adjust from Wartime to Peacetime.