Captain’s log supplemental. We have rendezvoused with Dr. Grant’s shuttle and, at his insistence, I have gathered the senior officers and Petty Officer Rodriguez for a briefing on the situation on Mercia VII. 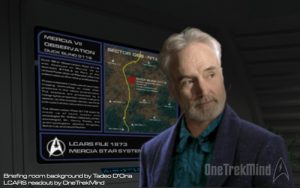 “The Federation Science Council’s Project Duck Blind is a relatively new cultural observation initiative. It began on stardate 8477.1 with an observation of the tribes of Garrit IV and since then it has grown to six pre-warp civilizations including the one on Mercia VII.”

Dr. Aidan Grant slid a computer disc into the control panel slot and the viewscreen in the Phoneix briefing room snapped on to show the Mercian star system, seven planets orbiting a G-type star. At the table, Conrad, T’Prana, Hennessy, Rodriguez and Valaja each shifted in their chairs as the briefing proceeded.

Grant explained the standard operating procedures for each survey team: how often they’d report in, rotation schedules, resupply and other details pertinent to maintaining the cultural survey on each planet.

“As Commodore al-Rashid explained to you, the team on Mercia VII has not reported in. At the time he communicated with you it had been forty-eight hours,” Grant’s stoic face surveyed the crew gathered at the table. “Now it has been sixty-two and still no contact. The science staff at Starbase 21—”

“Doctor Grant,” Conrad spoke up. Grant’s implacable face betrayed a hint of annoyance at the interruption.

“Yes, captain?” Grant replied, a note of forced patience in his voice.

Conrad glanced at his officers and then back at Grant. “I’m still wrapping my head around the fact that the Federation is spying on primitive cultures.”

“Observing,” Grant corrected. “These cultures are not a threat.” He turned back toward the viewscreen and tapped a control, switching to a zoomed in view of the main continent. “To continue.”

“If they aren’t a threat, then what’s happened to the survey team?”

Grant slowly turned away from the viewscreen to stare at Conrad. A few long seconds of silence fell upon the briefing room. Rodriguez, the Phoenix’s one-man security department, looked down at the table, picked up his stylus and pretended to make notes on the electronic clipboard in front of him. T’Prana and Valaja looked back and forth between Conrad and Grant. Ned settled back in his chair and let out a heavy sigh.

On the viewscreen a white target reticule appeared over what the display indicated were a series of hills near the Mercian capital.

“On stardate 3941.7 the U.S.S. Yorktown was ordered to Mercia VII in search of Federation social scientist Dr. Eric Cox.”

As Grant spoke, Conrad and T’Prana exchanged a glance.

“Dr. Cox had been conducting his own study of the Mercian people, independent of the Federation Council, but with support of the University of the Federation,” Grant continued. “His research concluded, correctly, that the Mercians were evolutionary advanced.”

“Indeed,” T’Prana offered. “Our research into the planet indicate that it’s humanoid inhabitants, if they continue their technological and social progress, they will achieve representative democracy and create the steam engine one-hundred-fifty years before North American Earth humans did. However, Dr. Cox’s name was not attached to that research.”

Grant’s eyes narrowed at the Vulcan. “Yes,” he simply said.

Grant approached the table, placed his hands flat upon it and leaned forward.

“Dr. Cox was convinced he could advance the Mercians to the steam age faster than his projections indicated.” Grant’s voice was low and foreboding. “He infiltrated their culture and began deliberately introducing technology in an attempt to speed it along.”

He paused and resumed pacing in front of the viewer.

“I was a junior science officer on that mission, anthropology and archaeology. Our landing party, disguised as natives, tracked down Cox. We repaired the cultural contamination as best we could. Captain Moraine placed him under arrest and he was quietly convicted of violating the Prime Directive.”

This time the Phoenix’s physician, Dr. Valaja spoke up. “Dr. Grant, was there a conclusion about what’s contributing to the Mercians’ advanced evolution?”

“Yes, it’s quite literally something in the water,” Grant responded. “There’s a protein in the water from the aquifers. Dr. Cox’s research indicated that it was affecting overall intelligence and the ability to adapt.”

“Is there any indication that it’s something that was artificially induced?”

Grant shook his head. “No. And subsequent scans from orbit and tests of samples on the ground have confirmed that. It’s a naturally occurring phenomenon.”

“This is all very interesting,” Conrad interjected, “but what is our purpose on this mission?”

“Investigation,” Grant replied. He leaned back slightly on his heels and crossed his arms. “We’ll beam down to the duck blind, check the survey team’s computer logs, determine why they haven’t reported in. It could very well be a malfunction in their subspace communications equipment.”

Valaja looked at her colleagues around the table and finally back at Grant. “Your body language suggests you don’t think it’s that simple, Dr. Grant.”

“Because we may have to go into the field, we’ll dress as natives,” he continued, ignoring the medical officer’s remark. “I will be a noble, and you will be my attendants, my entourage. I will need to make use of your materials fabricator to produce the required clothing.”

“And I will select the landing party,” Conrad spoke up.

Grant paused a moment, thrown off his rhythm, but quickly recovered. “As captain, that choice is yours, of course.”

“If there are no other questions,” Grant said, icily regarding the captain, “I turn this back over to you, Captain Conrad.”

“Thank you, doctor,” Conrad said. “The landing party will be myself, Dr. Valaja, and Petty Officer Rodriguez. Please cooperate with Dr. Grant. I’m sure he’ll have backstories for all of us.” He turned toward his first officer. “Commander T’Prana, you’ll be in command of the Phoenix.”

The crew nodded and intoned a chorus of “aye, sirs.” With a simple wave, Conrad indicated the briefing was over and they departed their seats, filing out into the corridor.