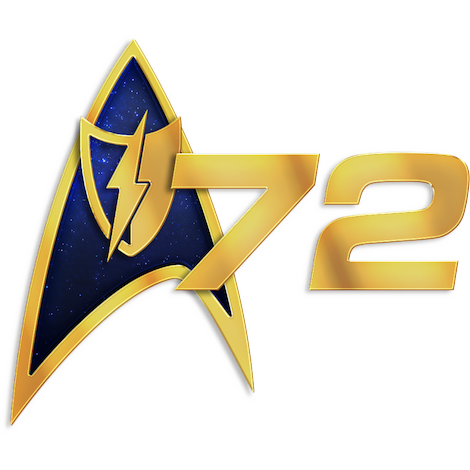 ‘Let this be a lesson to you.’ With the mask, his voice reverberated more deeply than he expected, which suited him well enough. The sun hung fat and heavy in the sky behind him, painting him and his half-dozen friends in monstrous, shadowed silhouettes lined across the wheat field, an impenetrable barrier.

Their quarry, the Cardassian farmer who had been so burly and bold when they’d first found him, now had a quaver in his arms as he rolled onto his hands and knees. ‘I don’t know who took your people.’

‘Maybe true. Maybe not.’ He hefted the old hunting rifle. It needed reloading after the initial warning shot, but the Cardassian didn’t know that. ‘But one of yours did. I don’t know what sick games you Cardies are playing, lurking near Horizon only to prey on our kids -’

He didn’t even have to signal his friends to move, broad-shouldered Tom Mason – face also disguised under his masked hood – driving his boot into the Cardassian’s gut to cut his denial short.

‘Thanks, friend.’ He clicked his tongue. ‘Some politician thought we could live side by side on this planet. Horizon and your pit of a colony. All friends in the Gavarian Corridor. That’s not working. And every time I catch any one of you anywhere near our turf, this is going to happen. Every day our people stay missing, this is going to happen. Worse and worse. Until you give our folks back. Or until you scram off our world. Got it?’

It didn’t matter what the Cardassian farmer said. While he didn’t seem as cowed as one would like, he still ran like hellhounds were at his heels once Tom Mason had cut his bonds. They watched him scramble across the field, clamber over the fence, and keep running into the distant treeline.

For a moment, none of them spoke. For it was a fine summer’s day, late in the evening with the sun’s warmth still drowning the field, still baking them in the masks that gave them just enough deniability to fob off complaints from the Cardassians or Horizon’s Constable. Still, for a moment, peaceful with the chirping of crickets and the light birdsong from the trees dotting the edge of the wheat field.

Only then, with the Cardassian long gone, did farmer Joseron Trice pull off his mask. His grin was wide and white against hardened skin of a face tanned by long years working in the sun, and now his voice didn’t sound rumbling, threatening. Without the mask, he wasn’t the threatening figure championing the rights of the Federation colonists on Horizon. Just a farmer.

‘That’s good work, my friends,’ Trice told them all. ‘He’ll tell his friends. He’ll tell them to worry. Because the people of Horizon aren’t taking this lying down any more. No matter what the Cardies think, no matter what the Administrator thinks, no matter what Starfleet thinks. We’ll fix this world ourselves if we’ve got to.’ He shouldered his hunting rifle. ‘And to hell with the politicians who don’t like it.’

Deep Space 12: Some of the crew of DS12 are heading out on the USS Crazy Horse to follow up on some leads deep in the DMZ for who attacked the station; meanwhile, the others stay behind to facilitate the repairs. But the station isn’t as safe as everyone now believes.

New Lakarian City: With the explosion of a freighter above the old city, the embassy staff scramble to maintain stability in their place of work and in regional politics.

USS Boadicea: After assisting a Cardassian team with the testing of a new weapon, the crew of the Boadicea is having a think tank with them, to glean what they can from the data.

USS Endeavour: En route to a colony in the Gavarian Corridor embroiled in conflict with its Cardassian neighbours, the Endeavour has encountered a pair of Union vessels in a confrontation which may spark more trouble in the region.

USS Hypatia: While attending a conference on Capella, the Hypatia has taken on more crew.

USS Pandora: En route back to Federation space, the Pandora’s downtime has been interrupted by urgent orders from Starfleet Command to change course, and answer a distress call from a top secret research facility deep in the Expanse.

USS Sutherland: Deep in the Wastelands, the Sutherland has discovered a settlement made of survivors of a lost Federation starship and their descendants.

We are entering a difficult time for Bravo Fleet in general and Task Force 72 in particular. The recent announcement confirming the time-jump to 2399 upon the conclusion of Picard season 1 is a great opportunity for the Fleet and for the Trek writing hobby in general, but it comes with its difficulties; stories left behind, plot threads to be resolved. Though nobody will be shackled or obligated to abandon their games or stories set in 2389, for the many looking to make the transition it can be hard to maintain enthusiasm and momentum without a strong idea of how to wrap up their 2389 narratives in a matter of months.

As such, the upcoming focus in TF72 is not going to be on collaborative, Task Force-wide canon – though of course various stories interested in the Alrakis Pact or the Cardassian front, including my own, will continue to develop and work together on these narratives. I also want to work where possible on coherent narratives for those looking to make the time jump, and offer support wherever necessary. But it is my intention to make use of Bravo Fleet’s competitions system and online resources to further develop TF72 as a community of GMs and players alike – all Trek fans and writers, regardless of what era we’re writing or planning on writing in.

So get ready for games! From puzzles to writing contests, while we crack on with our role-play and our stories, we’ll be sure to have a bit of extra fun together along the way.

As the Task Force looks towards the upcoming time jump, we enter a time of transitions. Those who want to carry on with present narratives will be supported as they always have; those who want to make the bold jump to 2389 are encouraged and supported in working together to make this as much fun as possible with exciting ends of stories and groundwork developed for future adventures. But within all of this, TF72 is going to place an increasing emphasis on community fun detached from the stories we’re writing or planning.