With the end of the fifth week of the Fleet Action, we enter the final stage, the mad-cap dash to the finish. But until then, we have the start of Phase 3, and the beginning of the end… 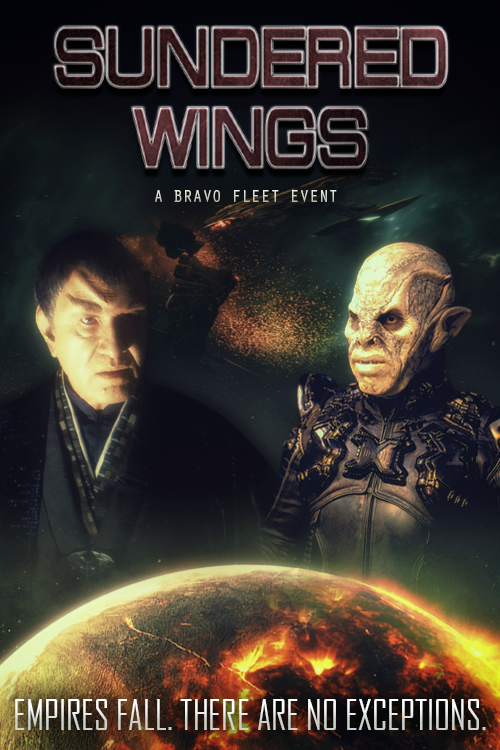 As Arcturus seeks any edge over the Romulan ships stalking their convoy, Commander Najan again presses the asylum-seeker Orban for more information. Anxious of losing his leverage over Starfleet, Orban remains intractable through the interview – but afterwards reaches out to Communications Officer Lieutenant Galan.

With the Imperial strike force almost upon the Agarath System, Endeavour’s crew finishes their preparations to protect it, and waits one last, long night ahead of the upcoming battle. When the strike force arrives, battle is met quickly – but careful planning gives the defenders an edge. Captain Rourke is nevertheless surprised when his enemy counterpart, Commander Lotharn, requests a cease fire and a meeting in-person on one of Agarath’s abandoned stations, far from any audience. Rourke reluctantly agrees, and has to wonder – what does Lotharn want to say without his comrades hearing?

Commander Duncan seeks the assistance of Grand DaiMon Deliaros to understand the threat facing Vorash, but the situation escalates quickly when renegade Remans, old enemies of Odyssey, takes Commander Hunsen and his team captive. Meanwhile, attempts by the Hazard Team to free trapped Reman miners results instead in another attack, with more officers taken captive, including Commander Lenjir. As chaos descends on Vorash, the team on the surface prepares to evacuate civilians out of harm’s way, while Captain MacCallister makes plans for a rescue mission.

The Dvorak leaves the Khunri system. Captain Taes decides to remain behind on Kunhri III out of a sense of duty to the Remans there, determined to see them adopt the sustainable farming techniques they so desperately need. Aboard the Dvorak, Commander Jakkelb begins mediation between the Reman leadership of ch’Couvae and the Romulan Republic. Later, on the surface of Kunhri III, Leander Nune and Melchor Dolan share a moment of intimacy. Taes again tries to convince Consul of Vitality Kecene to allocate fifteen percent of the planet’s labour force to agricultural work.

The Romulan Free State invasion of Foshir III continues. Tyrothan and Norvult lead a small group of Reman miners fighting their way out of the arathamite mines. The planet’s Star Empire administration attempts to activate a singularity to deny the invaders’ use of the mines and render Forshir III uninhabitable. Their plan is foiled as the Remans arrive just in time to shut the singularity chamber down. Meanwhile, the USS Ahwahnee detects a massive quantum distortion wave, alerting it to the singularity’s presence. Fearing loss of life on an unimaginable scale, Captain Felrak Vordenna orders the ship to the Foshir system at maximum warp.

Lieutenant Blake Pisani had arrived back on board the Atlantis to assist with saving the lives of the two individuals in the residential bombing. After some painstaking time, they were able to save the two individuals as well as figure out what type of bomb was used. Commander Telrit Frent, Commander of the garrison of Daloon, arrived on board the Atlantis to learn what they had found out about the bomb. They discover that that particular bomb was manufactured on Rator III and that someone on Daloon has been receiving them. Frent immediately suspects Marik Kavos as the culprit. Meanwhile, the IRW Implacable along with two other ships remained under cloak behind a moon of the next planet from Daloon. Koteb begins to put his plan into place just as the debates are beginning within the People’s Assembly. The Implacable and the two other ships decloak in orbit of the planet, giving the Atlantis a warning to surrender or be destroyed.

While the Rhyndacus was planet-bound, J’Soji discovers that a ship that once belonged to her fiance had been taken over by its First Officer who happened to be her sister. Kr’Antren enters into a taunting game with the new Captain of the IKS Amazonian Ruby for only it to turn deadly before being removed from command.

After arriving in the Opra System, the crew of the Ulysses begins to grow restless as both Captain sh’Elas and Commander Gor were attending negotiations planetside accompanied by Mister Kasik. After a few hours of silence on the bridge, Lieutenant Mitchell picks up several Romulan freighters moving to where the USS Ulysses is. Lieutenant Noli receives orders to set course for the Velorum Nebula, escorting those freighters from Captain sh’Elas while they finish up the negotiations. A few hours later they arrive at the entrance of the Nebula, Captain sh’Elas gets a status report before they begin to traverse the Velorum Nebula.

The USS Adventure arrives in the Quirinus system and soon becomes under attack by a Klingon ship. Commander R’Tor is surprised by the attack orders evasive maneuvers as they try to dodge the Klingon ship. They notice an asteroid field nearby and begin to move through it with much difficulty as the Adventure sustained damage. They eventually land on an asteroid that is able to mask their signatures for the time being while they start making repairs.

With a new dawn comes a new conflict as the Orion quarter of the city of T’ma’ru comes under light attack from Reman aggressors demanding Romulan blood. After a quick meeting with Serti, Sidda offers herself and her people to the fight to reinforce the lines in case of a Reman pincher. Meanwhile, the Vondem Rose has slipped past the orbital defences as planned and proceeds to T’ma’ru as stealthily as a battlecruiser flying through the air at supersonic speeds can. Governor Creval, entertaining his garrison commander and contemplating life as a besieged planetary ruler rudely has his morning shattered with the arrival of Vondrm Rose, the destruction of his ability to strike out at his foes and his rather sudden ceasing to be.

The Orion pirates, now secure in the brig of the Saratoga, begin to bicker, having had two days to stew before interrogations commence. Dazra’s plan to pit them against each other works with Tolev willing to cooperate in exchange for safety, revealing the plan as he knew it as well as that another Romulan ship, the IRW Audex, was on its way to Rhijun. Expecting a fight at first, Commander Jiras instead offers to talk with Captain Dex and an awkward diplomatic meeting commences after LtCmdr Ritru reveals she’s Jiras’ niece. Diplomacy unfortunately falters and fails and accusations turn into outright threats, revelations made and tensions spill over as Jiras returns to his ship and brings weapons to bear on Saratoga.

Finishing up at Larakas Colony, the Edinburgh prepares to get underway once more before a distress call from the Sharpened Cutlass draws their attention. Arriving just as Klingon attacks finish with the ship, they board to render any assistance they can, fighting off the last of the boarders left when they arrived. As another Romulan ship, the Clawed Death, arrives, the Cutlass is handed over, but not without learning that the Klingons managed quite the intelligence coup. With new orders to proceed to Glasea to lend aid, the ship arrives to find a world on the brink of ecological disaster. Investigations on the planet and the moon Pasari, prominent in the local religion, reveal that the moon houses a nearly 500-year-old Romulan outpost responsible for maintaining the hospitable nature of Glasea. With repairs made and the last steward of the outpost, forgotten by his Empire, finally relieved of his duties, a meeting takes place with the Glasea governor who reveals he knew about the Pasari ruse all along. Happenstances however gives them some intelligence on their Romulan doe, Patra, and the two Klingon ships, The Ghost and The Darkness, now in his seeming employ.

Tesla finds itself in orbit of Bajor as Lieutenant Vikas accompanies her security team to the planet’s surface to rendezvous with Captain Alvaro Vitinius to discuss the latest Cardassian threat of ships allegedly aligning themselves with the Romulans. While extending every pleasantry she can muster, Vikas can’t help but worry about the Captain’s villainous overtones. Meanwhile aboard Tesla, Captain Savik, deals with an insubordinate Chief Science Officer during a routine staff meeting.

Captain Fawkes is summoned to the bridge when Leda receives an automated distress call from a Reman ship and is dutybound to respond. Proceeding with caution, Fawkes orders yellow alert and a course set at warp eight to rendezvous with the vessel. Tensions become raised when Fawkes discovers that the distress call was not sent by the Reman Captain, but instead by the Reman’s Romulan captors. Aboard Xenius, Lieutenant Sommers faces off with a mutinous Cadet Ford who wants nothing but to be with her fiancée.

A surprised Mogrus Ensign questions some anomalous life-form readings coming from the cargo hold. Delighted, Lieutenant Commander Allan Alia-Ledgard heads to the hold where he and his chief engineer greet their expected passengers Lieutenant Muninn Musgrave and Ensign Shavar Ward. Unbeknownst to the foursome, as they tour the ship and reminisce about San Francisco and Starbase Bravo, a stowaway, Asenth frees herself from the confines of the cargo container in which she’d been hiding in favor of the lesser confined spaces of the Jeffries tubes where she would remain undetected until discovered by Musgrave in the heat of battle with a D’deridex-class warbird. Realizing the crew does not have much time, Musgrave tasks Asenth with launching the distress beacons from engineering as soon as it’s safe to do so. Asenth successfully completes her task while the Mogrus crew are detained aboard the warbird and Musgrave is wrongfully accused by their Reman captor of being Starfleet Intelligence agent.

The away team arrived at the debris of the miner ship and began their investigation into two separate teams of two. One team, Ensign Ruby and Lane, were tasked to find the bodies and discover how they died. Second team, Lieutenant Bazial and Gatia, was tasked to restore power to the terminals in the cockpit and figure out what happened to the ship. The answers to their questions were staggering and Sovereign must be told!