Hi, everyone! My name is Noel, and I am fortunate enough to have been selected as your new Bravo Fleet Chief of Staff. For those of you who know me, hello again! For those of you who do not, I have been lurking around the fleet for the better part of a decade. Outside of the internet, I’m a mature student with a love for most things sci-fi/fantasy, and I have been writing some form of fan fiction or original fiction since around 2004. In short, I’m a Canuck with a passion and deep love for Star Trek, and a deep love for this organization.

This first report is going to be relatively short and sweet. My intent is to briefly outline my role as Bravo Fleet Chief of Staff, provide an overview of my duties and projects that I’ll be working on in the future, and announce the winners of our first ever fleet competition! I will conclude with a few tertiary thoughts, and a reminder to the Hall of Honour team that I will be getting a hold of you folks soon (I’m just in the throes of school and trying to stay reasonably afloat).

The Chief of Staff – An Overview

According to the Bravo Fleet Charter, Article III Section 2.4, “The Bravo Fleet Chief of Staff is charged with maintaining the roster of the Fleet. They are also responsible for overseeing awards, competitions, and promotions.”

It is a pretty straight-forward position, but I’ll take another few sentences to break it down a little further.

Speaking of competitions, the Bravo Fleet Hazard Team logo competition has closed and the awards have been issued! Please congratulate the following for their amazing logo submissions:

The logos can be viewed here (click on each logo to see them fully):

The first place submission for the Hazard Team logo competition. 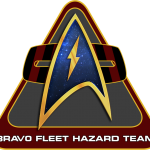 The second place submission for the Hazard Team logo competition. 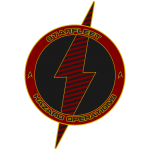 The third place submission for the Hazard Team logo competition.

Keep an eye out for more Fleet-wide competitions in the future, and congratulations again to these wonderful participants.

Folks, we are fortunate enough to be living in the era of Star Trek resurgence. Regardless of individual opinions about some of the new programs, Discovery is a major network hit headed into its third season. Star Trek: Picard is likely going to be a huge commercial success, and I am confident with Patrick Stewart and the announced cast it will be a solid addition to the renewed Star Trek universe. Though non-canon, Star Trek: Online is also a consistently active and engaging platform. Embrace the fact that, for the first time in over a decade, we have the chance to meet, make friends with, and convince a new generation (or returning generation) of fans to watch the show and, importantly, perhaps invite them into the Bravo Fleet community.

As Chief of Staff, my job is mostly behind-the-scenes work. But as a member of this admiralty team and of this community, I promise you that I will do my part to make sure Bravo Fleet remains the premier Star Trek fan group on the internet for years to come.

I want to conclude by really stressing three things:

If you ever have any questions, please reach out to me via Discord, where my username is Browsden.