I don’t know about anyone else, but I enjoyed the hell out of Season 2 of Lower Decks. Best Star Trek in two decades, in my opinion.

Old Trek fan ruminations aside, the Lore Office is pleased to announce some updates to our Starfleet ships, courtesy of some long-thinking, hard work, serious nerding, and canon updates from the latest show.

First are some minor adjustments to a few of our extant classes. With more information coming out from the improved models and behind-the-scenes insights of Lower Decks, we’ve altered and developed our articles for the Parliament and California classes. Both ships are bigger, with the role of the ‘utility cruiser’ better defined as such larger vessels assigned to workhorse tasks usually around Federation space. This has the bonus of better distinguishing them from the role performed by the Reliant-class, the spiritual (and visual) successor to the classic Miranda, which has also seen some minor updates.

We often review our ship classes to make sure we have a good array of designs at each rank, and that all the mission profiles are decently covered. Our latest highlighted things the Canon Team weren’t happy about with the old Atlantia-class, which was mostly a survivor of older administrations and days of fanon, and we decided we’d rather focus our efforts on other ships, especially canon ships. So we bid farewell to the Atlantia, who rides off into the sunset and retirement! This change – and the news to come – also prompted a minor review of the Resolute-class, beefing up her role in humanitarian operations to fill the niche left by the Atlantia and to help her stand on her own two feet as one of the successors to the Excelsior…

But the end is the beginning, and despite the title of this announcement I have two new ship classes to announce. Filling the Atlantia‘s slot in the registry as another Lieutenant Commander-level ship (and looting her names, to boot) is the all-new Grissom-class surveyor, a small but advanced science ship that bears an uncanny resemblance to the Oberth, as the Reliant does to the Miranda. Those old ladies might be retired, but we like fans of such classic ships to have options to remember them by. I hope we see some Grissoms in future stories!

Still, none of that’s why you’re really here, is it? For those of you who saw the finale of Lower Decks season 2 – and don’t worry, I won’t dish out spoilers – you’ll have doubtless been holding your breath for news of that new ship we saw. The Canon Team was equally enthused, and in possibly record time we dived into the development salt mines to scrabble together snippets of canon, all the images we could find, and hammered together the article for the new, the one and only… 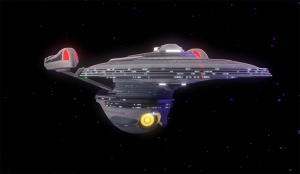 Introducing the Obena-class, an explorer built at the dawn of the 2380s and still operating as part of Starfleet’s backbone almost 20 years later. Much larger than the Excelsior-class in whose image she’s been made, the Obena was built to wave the flag and rebuild a war-torn galaxy with all of the best of modern Federation technology. A little smaller than a Galaxy, a little bigger than a Sovereign, she’s a ship for diplomats and explorers, and is available to members at the rank of Captain or higher.

I hope to see her out there soon.