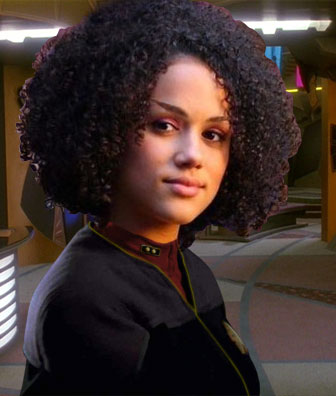 A Meeting of Minds. Good morning Fleet News Service readers of Task Force 93  and we also welcome our listeners who are joining us for the first time on Radio F.N.S. Today were hoping to interview Task Force 93’s Commanding Officer, Rear Admiral Anin.

At this very moment listeners were on our approach to Pollux II and Dave our cameraman is just taking some great snaps from the window rather than from the view screen in front of us. For those of you who haven’t visited Pollux II before let me describe it for you.

If you are a gardener then this is the ideal place for you. Dave is a keen gardener, aren’t you Dave? He’ll be taking some wonderful photos of the local plant life here on the planet to give you an idea of what it’s like here. I hear that Pollux 11 has calm weather all the year round with an average temperature of 23 Celsius. So there is no need to complain about the weather on this planet.

Well it’s been a very smooth flight so far with no bumps and no incidents along the way. So we must make a point of thanking the pilot when we get off our shuttle. Always pays to be polite listeners as I always say. Now we are just coming into land on Pollux II which is the home and heart of Task Force 93. The door’s are opening and it’s a nice warm day that greets us. I know what your thinking readers and listeners, your thinking if the people here ever get tired of the same weather every day. Well that’s something we can ask Rear Admiral Annin when we see her.

“Pleasure Ma’am. We’ll be waiting here for you when you are ready to leave.”

“Thank you Pilot. Now if you could just direct us to were we might find the offices of Task Force 93.”

“Yes Ma’am. It’s just over there on the right.”

“Thank you once again Pilot.”

Now readers and listeners of Task Force 93 I wish you were here to see this. Besides the tended gardens laid out here in front of the offices, the building also overlooks a dramatic and rugose coastline which is stunning on a day like today and just the type of place to sit and enjoy a cup of Vulcan tea and I have a feeling that Rear Admiral Annin might do that quite often.

Now here we are inside the building of Task Force 93. Let me describe it to you, goodness I feel more like a tour guide than a reporter for the F.N.S. The building itself is built in standard Starfleet decoration, yet it is usual to see the flags of the Federation, Romulan Empire, Klingon Empire and even the Gorn Flag hanging at the foyer. As we go further in the decoration and furniture is of old style wood but still very stunning.

Now listeners I’ve been told by a very nice receptionist on duty that Rear Admiral Annin’s office is on the fourth floor. It’s all very nice here listeners, very spick and span, quiet too even though there are a lot of people around.

The lift doors are opening quietly and there are quite a few people in here already listeners. It’s a bit of a tight squeeze to get Dave in with all his sound equipment.

“Excuse me, pardon me. Lovely to meet you all. Ruby Redferne F.N.S reporter for Task Force 93. Hope you are all well.”

We have a few enthusiastic people here F.N.S listeners but I have been asked to pass on their regards to the rest of the Task Force. Aren’t they friendly. The lift doors are opening and we are walking down the corridor to Rear Admiral Anin’s office and here we are listeners and readers of F.N.S. We’ve been told to walk straight in as her aide will be waiting for us. I can’t tell you how excited I am to be here. Oop’s Dave has just tripped up over a trailing wire. I did tell him that he shouldn’t have brought so much stuff but he hasn’t listened. Thank goodness it was here and not in the Rear Admiral’s office. Ah here is the aide.

“Hello so pleased to meet you. I’m Ruby Redferne F.N.S reporter for Task Force 93. I believe we have an interview with Rear Admiral Annin.”

The male Bolian looked at Ruby and gave her a soft smile “Yes Miss Redferne, you are earlier then expected” He stood up and walked towards the door “Admiral Anin is just ready with her video conference with one of the Captains at the borders” as he stepped aside and waved towards the wooden door.

This is it loyal readers and listeners of the F.N.S, he’s knocking on the door now and it’s opening just for us. This is so exciting isn’t it Dave?

Here we are in the office of the Commanding Officer. It’s rather old fashioned with strong dark wood furniture but tasteful all the same. Dave is setting up our sound system and Rear Admiral Annin is just finishing something on her PADD.

“Ah Miss Redferne, welcome to Pollux II. Please take a seat, my name is Rear Admiral Anin and I am the Task Force Commanding Officer of Task Force 93”

I hope she doesn’t mind Dave fussing around and doing final sound checks while I take this seat opposite her.

“Thank you for agreeing to do an interview with the F.N.S. Admiral. Our readers and listeners are looking forward to knowing a little about you.

“How are your family, keeping well we hope?”

“My family is doing alright, they are doing their daily studies and their work at home”

“That’s very nice to know. Would you care to tell us Admiral How long have you served in Star Fleet?”

“I have served Starfleet for 18 years now”

“During your career Admiral Anin, has there been a particular time in Star Fleet that you have enjoyed the most?

“Yes, I have enjoyed my time on Reaya 3 as their Chief Diplomatic Officer. It gave me a insight of diversity in culture between the people on Reaya 3 and local traders or surrounding systems”

“I can imagine you have seen many changes too. Any particular ones that stand out to you the most Admiral?”

“The most recent changes are those that stick, the attack on Xavier, the civil war of the Klingon Empire or my own reassignment as the Task Force Commanding Officer”

“I was wondering if you could bring our readers and listeners up to date with events that are taking place around Task Force93. For instance the Gorn invasion of the Canterra Sector how is it affecting those that are serving there?

“While the desire is there for the people of the Federation to know what is going on in these sectors. You have to understand that all information regarding that situation is done by official channels and not by an interview on the radio”

“My apologies Admiral. I was thinking of the families of those colonists who are still missing. Our listeners and readers are keen to know if you have any more news on them?”

“The news regarding missing colonist is still under investigation, we will keep the people informed by official channels”

“Thank you Admiral. I think that the F.N.S has taken up enough of your valuable time. So we’ll get out of your way..”

“Thank you Ruby. It was a pleasure to meet you.We must do this again some time.”

“Thank you we’ll certainly pass on your regards to the rest of the Task Force. Thank you once again for taking the time to talk to us.”

Now Dave has packed all his stuff and were heading back to the shuttle, if we can remember where we parked it. Dave thinks it’s around here somewhere.

This is Ruby Redferne reporter for the F.N.S signing off. Thank you for listening.