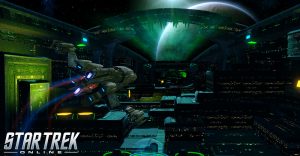 The Voth have appeared with their Fortress Ship. The ship threatens the Federation and its allies. For an extended amount of time, we have the chance to take the fight to the ship and destroy it before it destroys the Federation. Also added to this event will be Storm the Spire.

Whether you fight it by yourself or with a team of Fleet members you will have a chance to take it to the Voth. This event will give you the chance to add to your records more ribbons, as this is a special event some extra incentives will be given.